However, as CFO Richard Galanti spoke to analysts following the earnings release, it quickly became clear that Costco's underlying earnings performance was much stronger than it initially appeared. Here are five key points he made during the earnings call.

At the beginning of the earnings call, Galanti called out six items that together reduced EPS by $0.27. In other words, if none of these headwinds had occurred, Costco would have posted very strong earnings growth last quarter.

The biggest headwind was the strong dollar, which reduced the dollar value of the profits Costco earned abroad, cutting EPS growth by $0.10 in Q1. This will probably remain a headwind for the rest of the year, but eventually the dollar will stabilize and this issue will disappear.

Another headwind was a $0.04/share cost from non-recurring legal and regulatory issues, compared to a $0.03 benefit from a legal settlement a year ago. There was also a $0.05/share year-over-year impact from increased stock compensation in Q1, which will be much smaller for the rest of the year. Costco's earnings momentum should improve in the next few quarters as it faces fewer of these discrete headwinds.

Some disruption from the credit card shift

As you know, we'll be transitioning to a new co-branded credit card relationship in the U.S. next year. As we wind down our current relationship, new co-brand sign-ups have greatly slowed and, in fact, are now ceased. ... Year-over-year in Q1, this represented a $15 million or a $0.02 per share hit to our earnings.

In early 2015, Costco decided not to renew its long-standing credit card agreement with American Express (NYSE:AXP). This was a big hit to American Express, which has said that 20% of its global loan portfolio came from Costco co-branded cards. Next year, Costco will migrate to a new credit card issued by Citigroup.

In the long run, this arrangement will significantly reduce the credit card fees Costco has to pay. Costco will use this savings to provide more benefits for members, driving long-term growth.

However, in the short term, the changeover is impacting its earnings because American Express is no longer taking new applications for the Costco card. As a result, Costco is not receiving referral fees from American Express. This disruption will continue until the new co-branded credit card is launched later in the 2016 fiscal year.

Our new membership sign-ups in Q1 year-over-year companywide were up 7%. So total memberships, 45.4 million at quarter end, up from 44.6 million and including extra cards, 82.7 million in cards out there versus 81.3 million 12 weeks earlier.

Several analysts and media outlets reported that Costco had seen a slowdown in membership fee growth last quarter. However, this too was mainly caused by the strong dollar, which cut into the dollar value of international membership fees. 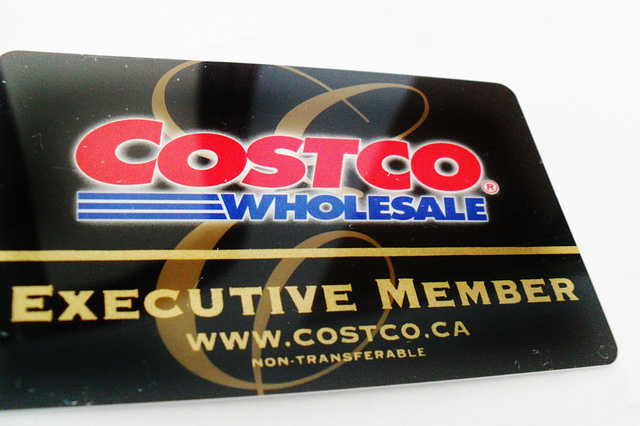 More customers are signing up for Costco's pricier executive membership.

Costco's membership signups during Q1 were up a healthy 7% year over year. As a result, it grew its membership base by nearly 2% during the 12-week quarter. Costco also continued to convert more members to pricier executive memberships. Thus, membership trends remain quite good.

In terms of core gross margins, which is ... food and sundries, hardlines, softlines, and fresh foods, as a percent of their own sales, they were positive year-over-year in Q1 by 13 basis points and they were higher year-over-year across all 4 of these merchandise categories...

In recent years, the profitability of Costco's core business has been under pressure, particularly due to inflation in food prices. Several times in the past three years, Costco has highlighted how it has kept the price for its large rotisserie chickens at $4.99 despite rising costs, to encourage customer loyalty.

Falling commodity prices in the past year have brought relief for Costco, particularly for food items. It continues to see better gross margin performance in the hardlines and softlines categories -- but now that strength is filtering through to its overall results.

Interestingly, of the 32 planned openings for fiscal 2016, 22 are in the United States and another three are in Canada. These are Costco's two mature markets. The fact that it is still finding such ample growth opportunities at home bode well for its long-term growth prospects as it continues to penetrate foreign markets.