Silver Wheaton isn't your typical precious-metals miner, and its results aren't typical, either. Here's what management thinks you should know.

Silver Wheaton Corp.'s (WPM 5.42%) third quarter was a mixed bag. But here are five key things that management wants you to know. In the end, there was more good than bad.

But that's why it's important to understand the business model. Silver Wheaton is a streaming company, which means it gives miners upfront payments for the right to buy future production at reduced prices. So there's really very little ongoing expense to maintain this production level, unlike there would be at a miner that needed to maintain its operations. And since Silver Wheaton's average cost for silver and gold is around $4 an ounce and $400 an ounce, respectively, there's plenty of room for profits even with these metals trading at the relatively low levels of around $14.50 an ounce for silver and about $1,050 an ounce for gold.

But lower prices are an issue
That said, the CEO noted, "Weak commodity price markets, however, once again affected our average realized sale price per silver equivalent ounce, which was 21% lower than Q3 of 2014." So while production is up and there's still a wide margin between Silver Wheaton's costs and the price at which it sells silver and gold, the top and bottom lines can't escape the moribund commodities market. The company's revenues fell around 7.5% in the quarter. After adjusting for one-time charges, earnings were $0.12 a share, down from $0.20 in the same period last year.

This, obviously, isn't unique to Silver Wheaton. Competitor Franco-Nevada Corporation (FNV 3.49%) has felt the heat, too. The top line at Franco-Nevada fell around 3.5% and the bottom line was weaker, year over year, too. This is, in the end, just a function of being involved in a commodity businesses and not an issue that stands out for either company.

We're cheap, literally
That said, Silver Wheaton doesn't like what it's seeing in the market for its shares. According to CEO Smallwood, "In the midst of the current commodity price environment, we believe that Silver Wheaton's share price does not always reflect the high-quality asset base that underlies our business model." But, more to the point, "We believe that at times our shares may represent the best investment option for our shareholders."

So the company has authorized its first-ever stock repurchase plan. That's a bit odd for Silver Wheaton, because its business model is based on using short-term financing to fund deals that it then pays back with share sales. So this is, indeed, an interesting development worth watching. The balance sheet has room for debt until the stock price improves, so this shift isn't likely to derail growth investments. But it could lead to higher interest costs until Silver Wheaton's stock price improves enough to justify share sales instead of buybacks. 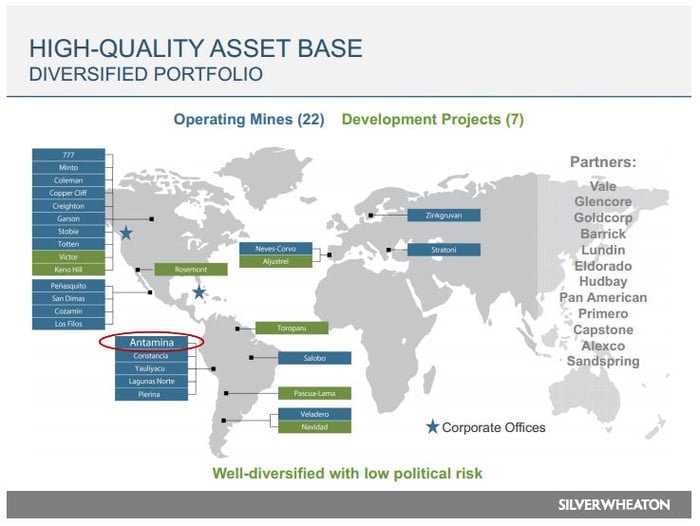 Speaking of growth ...
Which brings up the recent deal with Glencore. Silver Wheaton fronted Gelncore $900 million for the right to buy silver from one of the struggling miner's properties. This should add immediately to Silver Wheaton's production.

Silver Wheaton's CEO noted, "With the production and sales from our existing mines, we are well on track to reaching our previous guidance of 43.5 million silver equivalent ounces for 2015, which is over 23% year-over-year production growth." However, after the Glencore deal, that number has been upped to 44.5 million silver equivalent ounces, an advance of 26% compared with last year. This just shows that there's still plenty of opportunity for a company like Silver Wheaton, even though weak commodity prices are putting even the largest miners through the wringer.

Now for the bad news
So in spite of low commodity prices, Silver Wheaton is doing pretty well, which is a good takeaway from the third quarter. The only really big negative is that on Sept. 24, "Silver Wheaton received notice of reassessment from the Canada Revenue Agency, or the CRA, for the 2005 to 2010 taxation years." Breaking that down to plain English, Canada says Silver Wheaton owes it money. Silver Wheaton disagrees.

The problem is that the amount of money is fairly material, at $265 million. To put that in perspective, the company had around $200 million in net income last year. So this is a big number for the company to deal with if it loses.

There are bigger implications, too. This particular tax issue is specific to the tax years 2005 to 2010, subsequent years remain an open book. If Silver Wheaton loses, there could be more pain on the way. And then there's the not so little fact that the company's dividend is tied to its cash generated by operating activities, which means that any tax impact, particularly if it winds up being an ongoing tax increase, could reduce dividends on an ongoing basis. You'll want to keep a close eye on this case and note that it's likely to be an overhang on the shares until it's finally resolved.

So a mixed bag, with mostly good news. That's why investors looking for a precious-metals investment might want to consider investing alongside Silver Wheaton as it buys its own shares. That said, conservative investors should probably sit on the sidelines until the tax issue is solved.