Adding sensors, software, and analytics to industrial equipment and processes is forever changing how many industries work.

Imagine you're about to board a flight for your next vacation. The flight attendant is scanning your boarding pass before you walk onto the plane. Just before you find your seat your eye catches a glimpse of one of the plane's slow spinning, giant turbines. Those jets are about to whisk you and hundreds of other passengers away to your destination, and you think for a second how those engines will keep your plane (along with the wings, some crucial laws of physics, and a competent pilot) flying tens of thousands of feet above the ground.

Now, what if those turbines could collect information about how they perform during the flight and how much fuel they burn, so that each time they go up in the air it makes the aviation industry a bit more efficient and, consequently, reduces future flight delays and cancellations for your trips. That would be pretty great, right?

That's exactly what some of General Electric's (GE 0.72%) plane engines do, and they're just one small, but important, example of the Industrial Internet's capabilities.

Defining the Industrial Internet
The GE turbine example above is a simple one, but it shows just much impact the Industrial Internet (sometimes called the Industrial Internet of Things) can have. GE's line of GEnx turbines use a couple dozen embedded sensors to track 300 different parameters of the engine, and in turn collect 150 million pieces of data to be analyzed. The company says that if this type of data tracking were implemented in airlines across the globe, it could save the aviation industry $2 billion in mechanical costs, and flight delay and cancellation expenses.

Clearly, the aviation industry isn't the only sector that benefits from adding sensors to machinery. A recent report published by Accenture shows that Apache Corporation (APA 0.92%), an oil and gas exploration and production, is using sensors to catch major problems.

Apache believes that if oil companies improved oil pump efficiency by just 1%, it could boost global production by 500,000 barrels per day and add $19 billion in revenue per year.

Nearly every segment of the industrial sector can implement Industrial Internet technologies, like predictive maintenance, and most would see massive savings if they did. 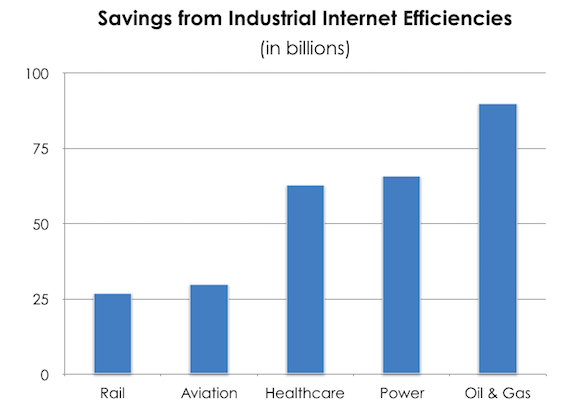 These estimates and examples are far more than just pie-in-the-sky dreams. Large and small companies all over the world are already experiencing the benefits of Industrial Internet technologies, and that's only going to grow. As the cost of sensors continues to decline and more companies see the value in upgrading their existing systems to more efficient, connected ones, the Industrial Internet will soon become more commonplace than unconnected machinery.