The oil industry is still in the very early innings of understanding how best to tap unconventional sources of oil and gas such as those found in tight shale rock formations. That said, some companies are ahead of their peers when it comes to unlocking these resources, which is giving them a competitive advantage during the downturn because they can get more oil out for a cheaper price. Once such company is EOG Resources (NYSE:EOG), which is doing a much better job than rival ConocoPhillips (NYSE:COP) at extracting oil from the Eagle Ford shale.

At a recent industry conference, EOG Resources detailed its progress in developing the Eagle Ford. That kicked off a discussion later on in the conference during a presentation by ConocoPhillips. An analyst posed the following question to the company:

So, we had EOG presenting this morning and EOG was talking about how they have a proprietary I guess high density frac capability in the Eagle Ford. And, when you look at their data, to be fair their production rates seem to be coming in dramatically better than the majority of the industry. What's Conoco...think about that? What [are] you doing internally about your results and how you think about whether there is a step change in efficiency you can gain in some of your unconventionals?

What the analyst is referring to is the following slide from EOG Resources' presentation: 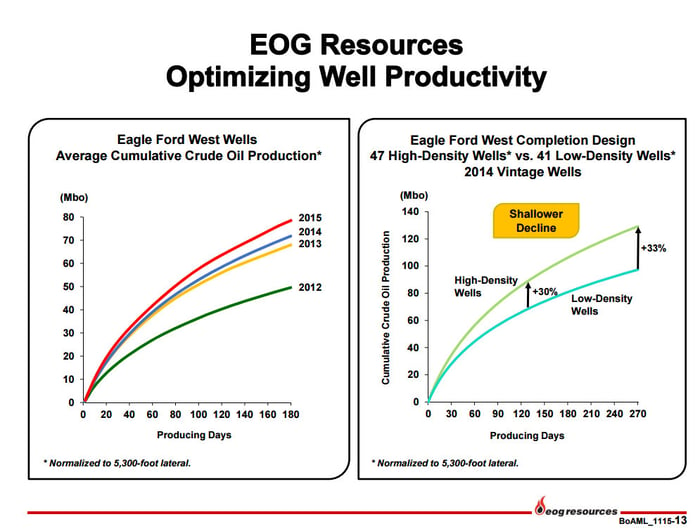 The analyst is pointing out the fact that EOG Resources' high density wells, which use more sand, are outperforming not only its other wells, but the wells of its rivals. The implication being that it's a better driller than ConocoPhillips, suggesting that the oil giant needs to improve.

Lots of running room
Here's what ConocoPhillips' EVP of E&P Matt Fox had to say:

So in the Eagle Ford for example we've increased our frac density by about 40% this year. So we are also increasing the density. We're doing multiple pilot tests looking at the number of layers we're ultimately going to develop in the Eagle Ford, testing a three-layer program, and remember back two years ago it was one layer then two layers and now we're testing a three-layer program.

Fox is quick to point out that ConocoPhillips is also using a higher-density frack, boosting proppant volumes by 40% so far this year. However, its testing of the Eagle Ford goes much farther than simply pushing the boundaries of proppant volumes. As noted on the slide below, the company is also testing the limits of well placement so that it can extract as much of the resources as possible from within its acreage.

Fox went on to say that:

We're running a bunch of different completion pilot tests as well, looking at different types of fracturing technology. We have had a pilot test that we called the stimulated rock volume...where we're actually making direct measurements of the three-dimensional characteristics of the fracture system. And we're learning a lot from that about what the nature of the fracs are. And that's ultimately going to lead us to improve the efficiency of the fracs further. So we're certainly...not at the tail end of the technology learning curve in these plays. There's more to learn and more optimization that we can get. So the very best plays like the Eagle Ford are going to get better.

What ConocoPhillips wants to make clear is its belief that the company is still in the early stages of learning how to best unlock the oil trapped within the Eagle Ford and other shale plays. The implication is that while higher-density fracks might be the step-change driving EOG Resources today, something ConocoPhillips is currently testing could be the step-change that drives its results tomorrow. So, not only is it following the leader by drilling higher-density wells, but it is leading the charge in developing other improvements that could drive better results in the future.

Investor takeaway
Right now, EOG Resources is delivering the best drilling results in the Eagle Ford shale, thanks in part to its focus on drilling higher-density wells. That said, ConocoPhillips thinks that drilling in the Eagle Ford will only get better in time because it's still in the early stages of learning how to develop the play. So, while EOG Resources is the better driller right now, it shouldn't rest on its laurels because ConocoPhillips could unlock the next key that takes its returns to another level.