Facebook, Amazon, Netflix, and Alphabet are priced for demanding expectations, but they are also among the most promising tech companies in the world. 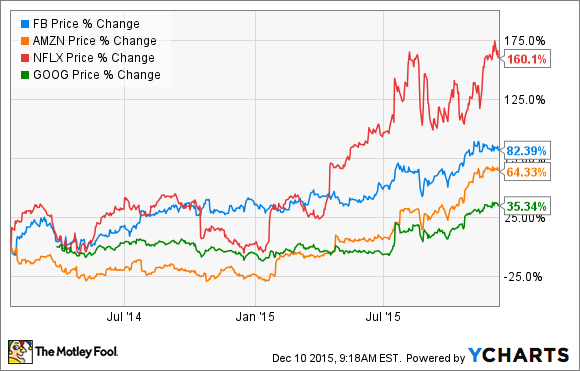 Facebook ( FB -1.14% ), Amazon ( AMZN -1.38% ), Netflix ( NFLX -2.33% ), and Alphabet ( GOOG -0.87% ) ( GOOGL -0.68% ) have delivered impressive gains for investors over the last several years. The companies have become such popular portfolio components that they've acquired their own acronym: FANG stocks (The letter G, of course, refers to Google, which recently changed its name to Alphabet.)

After several years of market-beating returns, these four companies are priced for demanding expectations, and this is understandably generating some concerns among investors. Are FANG stocks the next bubble to run away from?

Valuations can be tricky for these kinds of companies. They are investing tons of money for future growth, so current earnings don't really paint the whole picture. Still, the FANGs trade at above-average valuation levels.

Based on its P/E ratio, Alphabet is the most reasonably priced company in the group: It trades at a forward price-to-earnings ratio of around 22, which represents a moderate premium compared to the S&P 500 index's ratio in the neighborhood of 19. Based on that, Alphabet does not look like it's in a bubble at all; in fact, the stock seems priced at an attractive level for such a powerful tech business.

With a forward P/E ratio of around 39, Facebook is much more expensive than Alphabet. Still, Facebook is growing at an amazing speed, with constant currency revenue jumping by 51% year-over-year during the third quarter. Valuation is a risk for investors in Facebook, but the company is delivering truly exceptional performance to justify that premium.

Amazon is aggressively investing for growth, so earnings may not be the best metric to use for valuing the company. A better measure might be its price-to-sales ratio. Amazon has been trading at around 3 times revenue over the last year -- still a significant premium compared to the average company in the S&P 500, which trades at a price-to-sales ratio in the neighborhood of 2.

Then again, Amazon is both the leading online retailer in the world and a top player in cloud computing infrastructure. The company is growing at an amazing speed considering its size, and profit margins are moving in the right direction lately. Amazon is certainly priced for aggressive expectations, but it's also an exceptional business.

Netflix has a market capitalization value in the area of $53 billion, putting the online streaming video giant roughly in line with competitor Time Warner ( TWX )and its market cap of $54.6 billion. However, Time Warner is much bigger than Netflix in terms of revenue, so investors are paying a price-to-sales ratio of 8 for Netflix versus less than 2 for Time Warner.

However, Netflix is the global leader in its space, and the company is poised to deliver vigorous growth on the back of international expansion in the coming years. But it will still take some time for Netflix to reach Time Warner's scale: Analysts are on average expecting $8.7 billion in revenue for Netflix, and nearly $30 billion for Time Warner in 2016.

Bubble or no bubble?
When it comes to Alphabet, it just doesn't make sense to consider the stock in bubble territory. Alphabet is priced at only a moderate premium compared to the average company in the market, and it's the undisputed leader in online advertising, a compelling sector offering enormous potential for growth.

Don't get me wrong: Stocks don't go up in a straight line, and it's easy to disappoint investors when expectations are sky-high. With this in mind, it would not be a big surprise to see one or several stocks in the FANG group delivering below-average returns from these levels.

On the other hand, we are talking about four of the most innovative and dynamic growth companies of our times, and they still offer promising potential for expansion in the years ahead. Should any of the FANG stocks suffer any setbacks in the coming year, chances are, it will turn out to be a good buying opportunity for investors.

FANG stocks are no bubble: They are just a bunch of world-class growth businesses priced for demanding expectations. While aggressive valuation is a relevant risk to keep in mind, it's hardly a good reason on itself to run away from the FANGs.