For graphics chip company NVIDIA (NASDAQ:NVDA), 2015 has been a fantastic year. The company's stock has soared, particularly during the back half of the year, with shares rising by more than 60% year to date. NVIDIA's main business, gaming GPUs, has done exceptionally well, and the company has managed to grow its market share to record levels, putting rival Advanced Micro Devices (NASDAQ:AMD) in a difficult position. 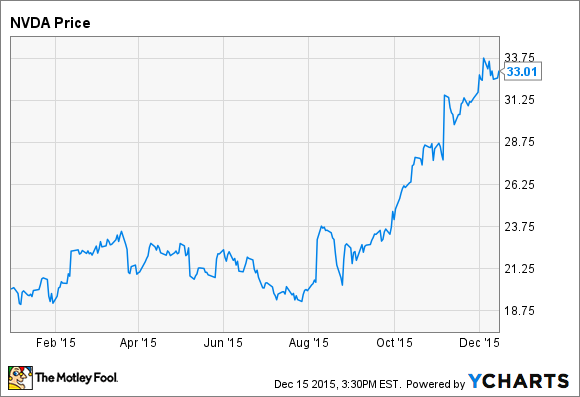 With 2015 coming to a close, it's time to take a look at some of NVIDIA's best headlines from this year.

Getting serious about cars

With NVIDIA's efforts to crack the mainstream mobile device market largely a failure, the company's Tegra line of SoCs are now mostly being aimed at the automotive market. NVIDIA's chips already power the infotainment systems in a variety of models, including the Tesla Model S, but the company's ambitions go far beyond powering a few screens.

In January, NVIDIA unveiled two platforms aimed at automobiles. Drive CX, a digital cockpit computer, has enough power to drive the equivalent of two 4K screens, and NVIDIA is betting that cars of the future will contain a large number of screens that require some serious hardware to run.

Drive PX, which contains two of NVIDIA's Tegra X1 chips, is aimed at powering driver assistance and self-driving features. The machine learning platform can analyze data from up to 12 cameras in real-time, identifying objects like pedestrians, road signs, and other cars. A future self-driving car will need an incredible amount of computational power in order to gauge its surroundings and take action in a safe, reliable manner, and NVIDIA is positioning its Tegra chips to be at the center of this effort.

An Android game console
While NVIDIA's GPUs powered the PlayStation 3, the newest generation of game consoles are powered by AMD exclusively. This hasn't mattered much for NVIDIA, as the company has stolen share away from AMD in the PC GPU market, shipping over 80% of discrete graphics cards during the third quarter.

Despite being absent from the major game consoles, NVIDIA is still making an effort to win the living room. In March, NVIDIA announced the Shield, a $199 set-top box running Android and powered by the company's Tegra X1 processor. This launch coincided with the announcement of a cloud game-streaming service, now called GeForce NOW, which allows Shield owners to stream a library of PC games from the cloud, with a resolution of 1080p and a frame rate of 60 FPS, depending on the strength of the user's Internet connection.

The Shield has been a blip amid strong sales of PlayStation 4 and Xbox One consoles, but NVIDIA's first set-top box could be just the beginning of the company's efforts to bring both Android and PC gaming into the living room.

Record market share
NVIDIA and AMD have been slugging it out in the graphics card market for years, and from 2010 through the middle of 2014, the market shares of both companies were mostly stagnant, with NVIDIA claiming about 60% of the market, and AMD picking up the rest. There were fluctuations, driven by seasonality and new product launches, but neither company was able to steal much share from the other.

This situation changed toward the end of 2014, when NVIDIA launched the GTX 970 and GTX 980, two graphics cards that were priced disruptively, prompting AMD to slash prices across the board. This kind of disruption isn't uncommon in the graphics card industry, but AMD had no answer to these cards for about nine months. In that time, NVIDIA managed to grow its unit market share to a record 81.9% at the end of the second calendar quarter. 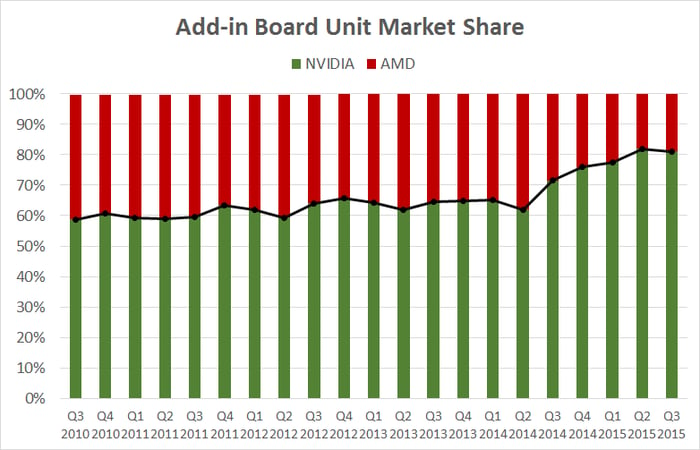 AMD finally launched new graphics cards in June of this year, but the launch was underwhelming. AMD gained back a morsel of market share during the third quarter, but the damage had been done. With new products expected from both AMD and NVIDIA during 2016, the new status quo (NVIDIA having a dominant market share and AMD picking up the scraps) will require AMD to put out genuinely better products than NVIDIA in order to claw its way back. In the recent past, this simply hasn't happened.

It's been mostly all good news for NVIDIA in 2015, although there were certainly some setbacks, particularly related to Tegra and mobile devices. But overall, the company had one the best years in its history, and while the market share gains it achieved in 2015 won't be replicated in 2016, NVIDIA is well positioned to continue growing for years to come.