What: Shares of Lumber Liquidators (NYSE:LL) slumped on Thursday after Goldman Sachs downgraded the stock to sell, stating that the recent rally is now played out. On Monday, the stock soared on news that hedge fund manager Whitney Tilson had covered his short position, citing that the worst-case scenario was now less likely. At noon Thursday EST, the stock was down about 12%.

So what: Lumber Liquidators' stock has been in free fall since peaking in late 2013, and after 60 Minutes reported earlier this year that the company's Chinese-made laminate flooring contained quantities of formaldehyde that may not meet safety standards, the stock slumped even further. The stock has been extremely volatile over the past few months. 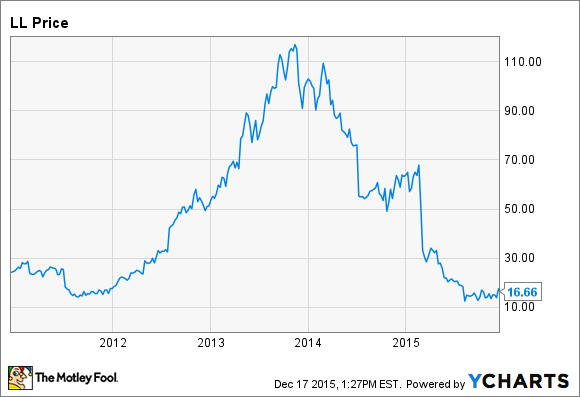 Whitney Tilson announced Monday that he was covering his short position in the stock, stating that he had received information which led him to believe that senior management was unaware of the safety issues prior to the 60 Minutes report. The stock surged on the news.

Some of those gains have now been erased, however, thanks to Goldman's downgrade on Thursday. The firm believes that the rally induced by Tilson's short covering is played out, and it now rates the stock as a sell. The stock is still up about 16% compared to before the Tilson announcement.

Now what: Until all of the issues surrounding the laminate scandal are fully resolved, Lumber Liquidators' stock will likely remain volatile. If it turns out that management was aware of the problems and continued to sell tainted flooring, the situation could get much worse. If Tilson is correct, and the likelihood of that is now slim, then the company many eventually recover. Personally, I'm putting Lumber Liquidators in my "too-hard" pile, to steal a phrase from Warren Buffett.