The warehouse retailer's best-selling product is something everyone needs.

Costco Wholesale Corporation's (COST 1.56%) best-selling product in 2015 was the same as it's been for years now. Typical of the company's strengths, it's a basic, no-frills commodity that people always need: toilet paper.

The warehouse chain sells approximately $400 million worth of its own Kirkland-branded toilet paper each year, or nearly 0.4% of total revenue. 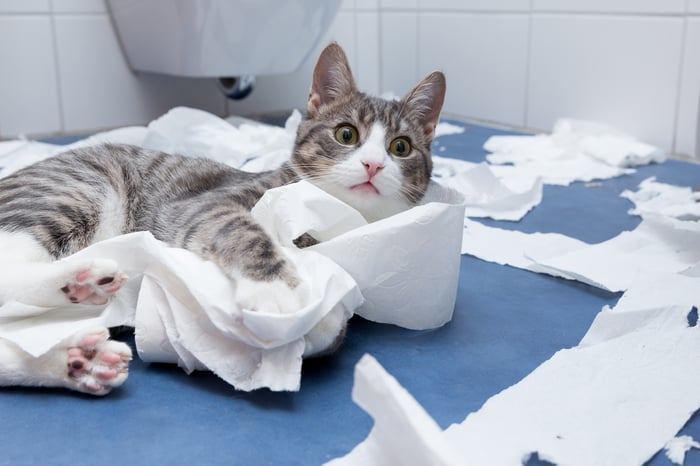 Perhaps, it's not such a surprise that toilet paper is the warehouse retailer's best-selling item as it represents many of the company's selling points. Costco draws in members with low prices for its no-frills, buy-in-bulk retail experience. Nearly every decision is made to save costs. Products are sold from the pallets they are delivered on, there are no shopping bags, and floors are often just cement and the ceilings equally bare. Toilet paper, similarly, is an everyday product that consumers need, but generally don't want to spend excessively on. It doesn't go bad so it's worth buying in bulk, provided the consumer has room to store it.

Costco is careful to note that low prices don't equal poor quality. The Kirkland toilet paper undergoes regular testing at the lab at its headquarters in Issaquah, Washington, and the company makes regular visits to the paper mills where the tissue is made. It sells over 1 billion rolls annually.

But it might not be the best deal
Some consumer experts say that Costco isn't the best place to buy toilet paper. Consumer Reports called Kirkland Signature an also-ran in its toilet paper ratings, recommending instead an exclusive Wal-Mart (WMT 1.21%) label, White Cloud 3-Ply Ultra.

Stephanie Nelson, who writes The Coupon Mom blog, also recommended against buying paper products at Costco as she said that prices are often cheaper for such items at discount stores like Wal-Mart and Target, and that coupons are also readily available for paper goods.

Amazon.com's (AMZN 2.57%) Prime service presents another alluring option for bulk goods like toilet paper. Similar to Costco, Prime offers its customers quick shipping and other bonuses with a membership fee. Amazon has taken advantage of categories like paper products and diapers to attract new members as the consumable products need to be replenished frequently and their size makes them ideal for delivery.

Toilet paper isn't Costco's only popular product. The company has also made a staple out of its $5 rotisserie chickens and its $1.50 deal for a hot dog and soda. The retailer sells 60 million rotisserie chickens a year, bringing in $300 million, but it barely makes a profit on them as it has held the $5 price point even as poultry costs have gone up. The chickens act as something like a loss leader, bringing customers into the door to purchase other things. It's made a similar attraction out of hot dogs, which have remained at the same price for 30 years. Costco sells 100 million hot dogs a year, or four times more than all of Major League Baseball. That cheap eat is another bonus for consumers who walk in the door.

While not everyone may agree that toilet paper is the best thing to buy at Costco, the product is likely to continue to be a best-seller as the company's position as a low-price, buy-in-bulk warehouse retailer makes it a perfect fit.

Jeremy Bowman has no position in any stocks mentioned. The Motley Fool owns shares of and recommends Amazon.com and Costco Wholesale. We Fools may not all hold the same opinions, but we all believe that considering a diverse range of insights makes us better investors. The Motley Fool has a disclosure policy.