It seems an understatement to say GoPro (NASDAQ: GPRO) has had an awful year. Shares of the action camera specialist are down more than 70% year to date, badly underperforming the broader market. And this despite the fact that GoPro has managed to increase sales of its products on a year-over-year basis by more than 55% for the first nine months of 2015: 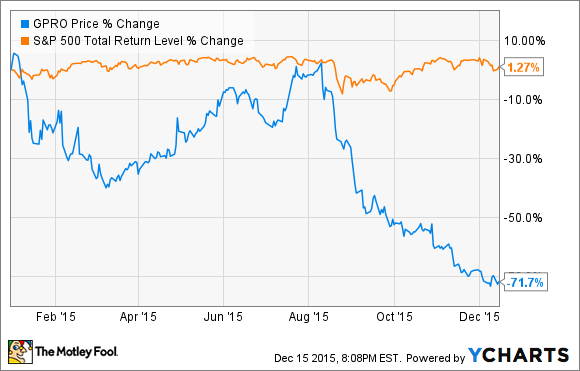 Curiously, as of early August, GoPro stock was holding up relatively well after an encouraging second-quarter report that absolutely trounced expectations. Little did investors know, though, only a few weeks earlier, GoPro had celebrated the launch of what is now clearly its worst product of 2015, the HERO4 Session:

That's not to say the HERO4 Session is inherently a "bad" product. In fact, I think GoPro rightly describes it as its "smallest, lightest, most convenient camera yet." The HERO4 Session is waterproof out of the box, features simple, one-button control, and is 50% smaller and 40% lighter than any other HERO4 camera.

Unfortunately, the HERO4 Session also stood out as the primary antagonist in GoPro's dismal third-quarter report released in late October. Specifically, GoPro managed to grow quarterly revenue 43% year over year to just over $400 million, and more than doubled its earnings to $36.6 million, or $0.25 per share. But for the first time since GoPro went public last year, those results fell far short of its own guidance, which called for revenue of $430 million to $445 million, and earnings per share of $0.29 to $0.32. In addition, the mid-point of GoPro's fourth-quarter guidance indicates revenue will decline around 17% year over year during the crucial holiday shopping season.

Sure enough, according to GoPro CEO Nick Woodman, two of the three factors to blame for its under-performance were related to the HERO4 Session.

The wrong kind of competition
First, Woodman said they priced the HERO4 Session too high at $399, which caused consumer confusion between the HERO4 Session and the wildly popular -- and identically priced -- HERO4 Silver camera. Of course, that wasn't terribly surprising considering GoPro had only just reduced the HERO4 Session's price a few weeks earlier to $299. Speaking of the HERO4 Session's failure to compete with its feature-rich big brothers, Woodman stated: "[E]ven introducing something that's new, and convenient, and as exciting as this, it's a tough road to hoe against GoPro."

More trouble to come?
Third -- and not directly related to the HERO4 Session -- GoPro believes its shortfalls were also caused by its under-funding of marketing in both Q2 and Q3. As a result, GoPro promised to ramp advertising efforts beginning in Q4 to stoke demand.

Despite that more aggressive advertising spend, however, the worst may not be over for GoPro and its HERO4 Session just yet. Earlier this month, GoPro once again reduced the price of the HERO4 Session by $100, resulting in a new retail price of just $199. While that may sound exciting from a consumers' perspective, I've already voiced my fear that it may signal the HERO4 Session is still suffering weak sell-through in Q4. Incidentally, these same concerns prompted a downgrade from an analyst at Morgan Stanley on December 14, sending shares of GoPro spinning to a fresh 52-week low.

To its credit, it's quite possible GoPro has finally found the sweet spot in pricing its tiny new camera. And going forward, I should hope the HERO4 Session has taught GoPro valuable lessons it can use to ensure the success of future product launches. But in the meantime, I think it's safe to say the HERO4 Session can easily be considered GoPro's single worst product in 2015.