Ever since reinstating its dividend in 2012, Apple (NASDAQ:AAPL) has consistently boosted its dividend and overall capital return program each year. For the most part, Apple has aggressively focused on allocating the majority of its capital returns to share repurchases, although it appreciates that income investors will demand some increases in yield at the same time. 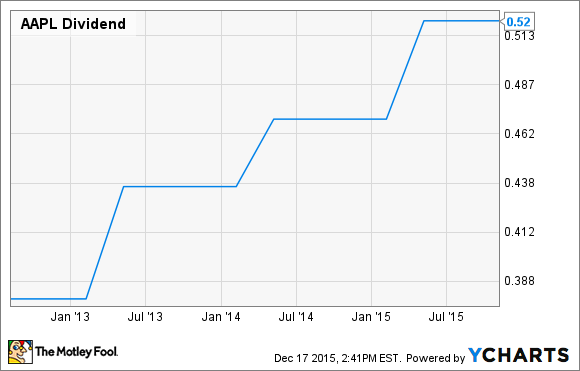 Most recently, Apple expanded its capital return program to a whopping $200 billion in April, following its typical timeline of annual updates every March or April. In chronological order, Apple's annual dividend increases since 2012 have been 15%, 8%, and 11%. The most recent dividend increase was in May 2015, bringing the quarterly payout to $0.52 per share. At current prices, that represents an annual yield of approximately 1.85%.

There should be little doubt that Apple will indeed raise its dividend again in 2016. After all, with nearly $150 billion in net cash on the balance sheet, Apple can clearly afford it and it has made capital returns an important financial priority. The question is by how much. 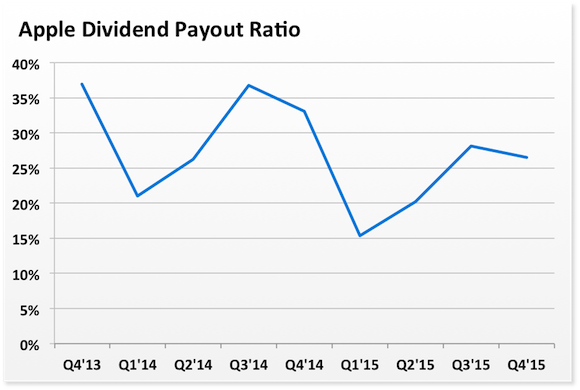 In addition to all that cash on hand, Apple continues to be incredibly profitable and enjoys healthy cash flow. The Mac maker's payout ratio of dividends compared to earnings per share was a modest 27% last quarter, which is about in the middle of the range that it fluctuates within.

On average, analysts expect Apple to generate $10.73 in earnings per share next year. If the company decides to pay out 25% of that, then that would translate into a quarterly payout of $0.67 per share. That would represent a 29% increase over the current quarterly payout, which is probably a little too much of an increase to expect.

By the time that Apple is ready to update its capital return program (March or April), another two fiscal quarters will have passed. At that point, it's quite likely that Apple will be approaching its $140 billion authorization limit (Apple normally repurchases $5 billion to $10 billion per quarter) and will need to boost the authorization again.

Will Apple, Inc. Raise Its Dividend in 2016? @themotleyfool #stocks $AAPL Next Article
Current