Earnings growth could accelerate later in the year due to several important catalysts.

Costco Wholesale (COST 1.56%) is putting the finishing touches on a successful 2015. Costco stock hit a small speed bump earlier this month -- following an earnings miss -- but it has posted a total return of more than 20% this year. 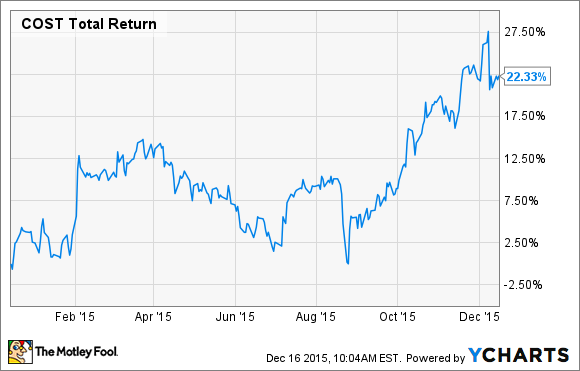 Despite Costco's Q1 earnings report falling short of investors' expectations, 2016 is shaping up to be a great year for the discount warehouse giant. Three potential tailwinds -- the switch to Citigroup (C 0.91%) as its exclusive credit card issuer, a likely membership fee increase, and the possible stabilization of oil prices and the dollar -- could boost Costco stock next year.

Reducing credit card fees
For years, Costco has used its immense scale to negotiate extremely low card acceptance fees. (Those are the fees that it pays to banks and payment processors every time it takes a credit card payment.)

Under its current exclusive agreement with American Express, Costco pays 0.6% of the transaction value, according to Bloomberg. That's far below the 2%-3% fees that are common in the industry. Under its new deal with Citigroup and Visa, Costco's card acceptance fees will be about zero after incentives.

Citigroup could benefit from this deal because Costco attracts high-income shoppers. As the exclusive issuer of a Costco co-branded credit card, Citigroup will get to access a large pool of highly profitable loan volume.

Meanwhile, Costco could get roughly $200 million in annual savings on credit card acceptance fees. Most of this benefit will be passed along to customers in the form of lower prices and more benefits. However, that's still good for Costco, as it will increase member loyalty and drive continued sales growth.

Costco may increase its membership fees next year. Image source: The Motley Fool.

Every so often, Costco increases its membership fees. In 2000, it raised its basic membership fee by $5 to $45. It implemented another $5 increase to $50 in 2006. Finally, it increased the annual fee by another $5 to $55 in 2011. At that time, it also increased the price of the executive membership (which offers additional benefits like 2% cash back on purchases) to $110.

Based on this fairly predictable cadence of membership fee increases, there's a good chance that Costco will announce its next increase during 2016. When that happens, analysts and investors will start to anticipate an acceleration in earnings growth as the additional membership fee income begins to hit the bottom line.

Reported revenue growth could accelerate
While Costco has historically been a high-growth company, its revenue increased just 3.2% in the 2015 fiscal year. Analysts currently expect fairly modest revenue growth of 5.1% this year, as well.

The reason for this slowdown in revenue growth is that fuel prices have plummeted in the past year or so while the dollar has strengthened considerably against many other currencies. This means that Costco is bringing in less revenue from selling gasoline and that its international revenue looks smaller when converted into dollars.

However, fuel prices can't fall forever. And while the dollar could continue rising in 2016, there is a good chance that it will stabilize before the end of the year. That would remove two massive headwinds to Costco's revenue growth.

Between these two factors, the strong dollar is a bigger problem for Costco. Low fuel prices may hurt revenue, but if anything they are a net positive for earnings. By contrast, the strong dollar is reducing the value of Costco's earnings outside the U.S., which is unfortunate because the company tends to be more profitable in its international markets.

A lot to look forward to
The three catalysts discussed here -- the new credit card agreement with Citigroup, a membership fee increase, and stabilization of fuel prices and the dollar -- are all likely to occur at some point in 2016.

Thus, while analysts expect Costco's EPS growth to slow to less than 5% in the current fiscal year, earnings growth is likely to accelerate in fiscal 2017 (which begins in late August). That could be enough to produce another year of solid gains for Costco shareholders.

Adam Levine-Weinberg has no position in any stocks mentioned. The Motley Fool owns shares of and recommends Costco Wholesale and Visa. The Motley Fool recommends American Express. We Fools may not all hold the same opinions, but we all believe that considering a diverse range of insights makes us better investors. The Motley Fool has a disclosure policy.