Please ensure Javascript is enabled for purposes of website accessibility
Free Article Join Over 1 Million Premium Members And Get More In-Depth Stock Guidance and Research
By Steve Heller - Dec 20, 2015 at 9:33AM

Which model is right for you really depends on how you'll be using it, but each of these 3D printers is a 'best in class' option.

Since its humble beginnings in the 1980s, 3D printing has come a long way. The technology has now become an essential tool for product designers to bring products to market faster, surgeons to rehearse complicated procedures, orthopedists to create customized implants, and manufacturers to make fundamentally better products. Because the uses of 3D printing are so diverse, there are many 3D printers that can be considered best in their class.

From appropriate choices for do-it-yourselfers all the way up to models suitable for professionals, here are six of the best 3D printers you can buy today.

A do-it-yourselfer may relish the hands-on experience of being able to build a 3D printer from the ground up and truly understand its essence. Options in this class of 3D printers usually cost between $200 and $2,000, offer many opportunities for customization, require a high level of knowledge of electronics assembly, and the ability to use complicated open-source software. Suffice it to say, 3D printers that cater to this demographic aren't for the faint of heart, nor those who lack patience.

The open-source RepRap project is the leading online resource for do-it-yourselfers, where many blueprints are freely available to download. One such design is the Mendel90, which has taken the highly popular open-source Mendel Prusa design and made significant improvements in the areas of reliability, build quality, and sturdiness. For around $785,  3D printing enthusiasts can build a Mendel90, which prints in PLA and ABS plastic in layers 50 microns thick.

Consumer and family friendly
When it comes to consumer- or family-oriented 3D printers, there are hundreds of options to choose from. The best of these attempt to balance affordability, ease of use, reliability, and consistency in one package.

3D Systems' ( DDD -3.80% ) $999 Cube 3 is marketed as 3D printer for everyday consumers and families. With a dual-extruding print head, the Cube 3 can print simultaneously in PLA, ABS, or a water-soluble plastic that allows users to easily wash away support structures. The Cube 3 also features a self-calibrating print bed, a high-resolution mode that can print layers as thin as 70 microns, and a full software suite.

The drawback of buying a consumer system like the Cube 3 is that you'll pay a high markup for printing materials, since it only accepts proprietary materials. For $49 a pop, users can expect to print 13 to 14 "mid-sized" creations per cartridge on its 6-cubic-inch build platform, which over the life of the printer, may not run cheap.

Budget minded
Backed by Taiwanese manufacturing giant New Kinpo Group, XYZprinting leverages its manufacturing expertise and economies to scale to offer consumer 3D printers at a fraction of the cost of most leading competitors. XYZ's most popular 3D printer is the $399 DaVinci 1.0, which won CES' 2014 editor's choice award, and at the time of this writing, was the best selling 3D printer on Amazon.com.

The DaVinci 1.0 prints objects in ABS plastic, features a single-nozzle print head, build volume of 7.8 cubic inches, 100-micron layer thickness, and is ready to use right out of the box.

Engineer's desk
Product designers and engineers often opt for 3D printers that feature large build volumes, high part quality, and low running cost, to affordably iterate designs. Users in this category can reasonably expect to spend between $2,000 and $5,000 depending on their needs. The best 3D printers for an engineer's desktop usually employ an extrusion-based technology like that found in consumer 3D printers, or use a UV-curable resin that creates more detailed prints.

Historically, Stratasys' ( SSYS -4.75% ) MakerBot 3D printers have been the go-to choice in engineering and design circles, but the brand's reputation became damaged after the release of its fifth-generation Replicator platform, which continues to experience quality issues with its smart extruder. Consequently, engineers and designers seeking higher reliability may want to consider Formlab's Form 2, which claims to be the most advanced desktop 3D printer ever created. 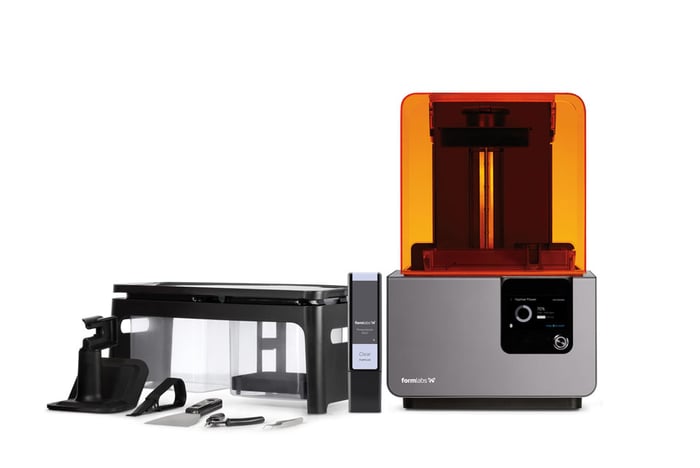 The $3,499 Form 2 offers a professional 3D printing experience in a desktop package using technology that's often reserved for printers costing in excess of $50,000. The end result is high-quality parts that have extremely smooth surface finishes and fine details. The drawback is that the build volume is constrained to 5.7 cubic inches, and UV-curable resins start at $149 per liter. Still, for the price, it's hard to argue with the quality of the parts that the Form 2 can produce:

Lowest running cost
Design and engineering firms that require a high volume of early stage prototypes and conceptual models, and are concerned about the long-term costs of 3D printing, should look to Mcor Technologies' professional 3D printers, which use reams of ordinary copy paper as their primary material. Comparatively speaking, systems that require costly (and often proprietary) printing materials can cost users between five and 30 times as much to operate. For high volume users, the savings on materials alone could pay for one of Mcor's 3D printers, which cost under $50,000, in a matter of years.

Skeptics may dismiss the idea that paper could be a compelling 3D printing material, but that's usually before they see the photorealism that Mcor's Iris 3D printer is capable of producing:

For the pros
For the most serious of users who require the best of the best, look no further than Stratasys' Objet500 Connex3, a professional 3D printer that can simultaneously print in multiple materials and colors to produce some of highest-quality prototypes in the industry. With a price tag of about $330,000, Stratasys' industry-leading multimaterial 3D printer is aimed at users who demand it all from their prototypes: form, fit, and real functionality, before being sent off to larger-scale manufacturing.

The multimaterial capability of the Objet500 Connex3 has even helped to to save lives, thanks to its ability to 3D print life-like models of human brains with tumors that allow surgeons preparing for complicated cancer removals to rehearse the procedures.

The best 3D printer depends on your needs
Unfortunately, the days of having a personal Star Trek Replicator remain far in the future, and there isn't one 3D printer that can do it all. When determining the best 3D printer for your needs, focus on areas like performance, capability, running costs, value, and reliability.

Why Arrival Shares Plunged 43% in November

3 EV Stocks That Could Make You a Fortune