If it could, Frontier Communications (OTC:FTR) would probaly take a mulligan on its past year.

While 2015 had some positive signs for the future of the company, the past 12 months overall were pretty brutal. Frontier stock lost nearly half its value, dropping by nearly half from a Feb. 17 high close of $8.42 to a Dec. 14 close of $4.50.

The year had its moments. The company not only moved past its initial bungling of the Connecticut operation it bought from AT&T, but it also announced a deal with Verizon (NYSE:VZ) that will more than double the size of the company.

Still, the repairs to its reputation in Connecticut and its Verizon deal, which is expected to close in March, didn't help it as it struggled for the past 12 months. It was a year with few highlights, but one business segment was a clear loser. 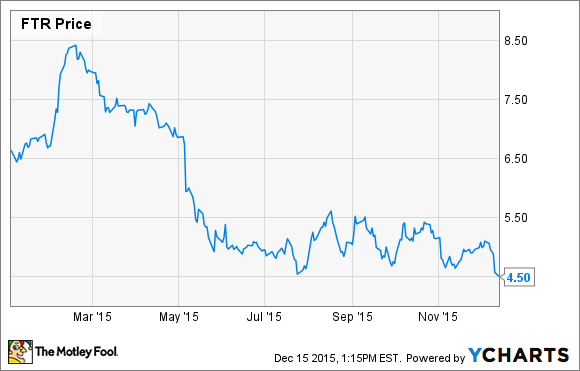 Frontier's stock price went down and stayed down in 2015. Source: YCharts.com.

The company is bleeding business customers
Frontier serves two distinct audiences -- residential customers and businesses. The company lost subscribers in both areas in the three quarters it has reported on for its fiscal 2015, but the numbers by percentage were much greater on the business side.

In the first quarter, the company lost 0.4% of its residential user base but dropped 1.2% of its business customers. During the second quarter, the losses broke down to 0.6% residential and 0.6% in business. Things got bleaker again in the third quarter, when the residential side lost 0.9% and business saw a 1.7% fall.

The company did consistently eke out more revenue from its dwindling customer base, going up 4% year over year in Q1, 1.6% over the previous quarter in Q2, and 0.6% over Q2 in Q3. That's commendable, and it shows the company has done a good job in getting revenue out of its existing base, but you can't squeeze blood from a stone.

Frontier has a dwindling number of business users and it's not feasible to think the company can keep increasing the money it makes as its numbers shrink, The drop is also concerning because it suggests that the attempts to grow revenues from business users are pushing some of them away.

Steps are being taken
It's possible Frontier will show some business user growth in the fourth quarter because it kicked off a new promotion, Price for Life, that lets qualifying new customers lock in a price forever. The deal, which is being offered to small businesses, lets them pick an Internet and business phone package and then lock in no increases for as long as they keep it.

"Small business owners deal with surprises daily, but unexpected rate hikes for Internet and phone services don't have to be among them," said Frontier Commercial Marketing VP Cory Jones in a press release. "Price for Life gives small business owners `budget certainty' that their pricing for fast and reliable Internet and phone service will remain the same next month, next year, and for so long as they are a Frontier customer."

A new hope
In addition to trying to sign up new customers, Frontier will also be adding new business customers as part of its $10.54 billion deal to acquire Verizon's wireline operations in California, Florida, and Texas. The deal, which has received all necessary regulatory approvals, is expected to close in March. It will give Frontier 3.7 million new voice customers, 2.2 million broadband subscribers, and 1.2 million FIOS pay-television customers.

The company didn't break down how many of those are residential and how many are business, but the Verizon acquisition will see Frontier adding some business customers and growing the territory it tries to get new ones in. That, plus Price for Life, might help the company turn around what was the bleakest part of a bleak year.