Oil companies are notoriously awful at predicting oil prices. Maybe it's the wildcatter bravado that makes them so bold, or maybe it's just that the future is so tough to predict. Either way, they've made some bad calls over the past year, with two companies in particular really standing out for making absolutely horrendous decisions based on their bold oil price predictions.

We're cashing in, and going all in on the rebound

Oil prices started to slide in mid-2014, after demand growth was less-than-expected. Most oil companies protect against such unforeseen events by hedging a portion of their production. Continental Resources (NYSE:CLR) was one such company. However, by early November of that year it decided that the price of oil was done going down, and it was backing up that bet. CEO Harold Hamm outlined what the company was doing by saying: "We view the recent downdraft in oil prices as unsustainable given the lack of fundamental change in supply and demand. Accordingly, we have elected to monetize nearly all of our outstanding oil hedges, allowing us to fully participate in what we anticipate will be an oil price recovery."

By cashing in its oil price hedges early, Continental Resources was able to capture $433 million in gross proceeds. While the move put a little money in its pocket and left the company wide open to the upside in the price of oil, it also left it completely exposed to the downside. Suffice it to say, the company didn't expect oil to do this: 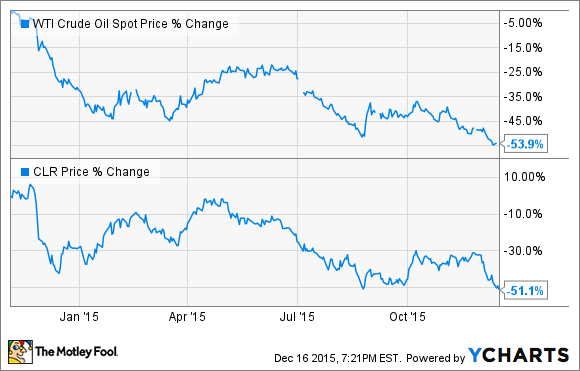 The decision to cash in its hedges early cost Continental Resources an unfathomable amount of money. If the company simply chose to just leave its oil hedges alone it would have made an extra billion dollars over the course of the past year. Further, not only did the company miss out on that gain, but its stock price suffered because of its complete exposure to the downside of the price of oil, with the 50% drop in its stock price wiping out nearly $10 billion in investor value over the past year.

Getting greedy at the wrong time
I don't know if it was sheer greed or an intense desire to quickly turn around its business, but Canada's Penn West Petroleum (NYSE: PWE) was even worse at trying to time the oil market. In late July 2014, the company wrote in an investor update: "As of July 1, 2014, we are now participating fully in the currently strong crude oil price environment with the last of our WTI hedge positions expiring on June 30, 2014. This allows us to immediately realize 100% of current market pricing which currently exceeds our 2014 budget assumption by approximately $10 per barrel."

With the price of oil running $10 per barrel higher than its budget assumption, Penn West wanted to capture this upside so it simply let its oil hedges roll off and didn't add any new ones. However, in opening itself up to the upside, it also left itself fully exposed to the downside. It's a move that really came back to bite the company when oil did this: 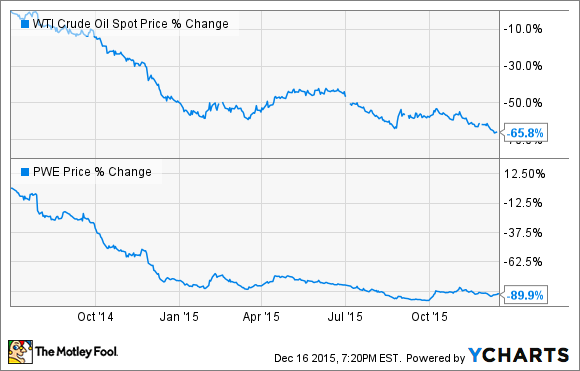 In trying to reach for the slightly higher market price for oil, Penn West ended up costing its investors more than $4 billion in market value loss after oil prices plunged. It's a move that also forced the company to cut and then suspend dividend payments because it now needs every bit of cash it can get its hands on to survive.

In commenting on oil prices later that year, CEO Dave Roberts said, "Penn West's business model assumes a conservative long run-term commodity price; however, the recent downturn falls outside our lowest probabilistic expectations." In other words, Penn West Petroleum didn't fathom a steep drop in oil prices as being a remote possibility. That said, it's easy to understand why it put such a low probability on the downside when the company's eyes were so focused on that extra $10 barrel of upside.

Investor takeaway
Oil companies are really bad at predicting where the price of oil will go in the future. Worse yet, they can make absolutely awful decisions based on their view of the price of oil. The takeaway here is pretty clear: When an oil company puts money behind a bold oil price prediction, it's better off to watch the looming implosion from the sidelines.