With its unit price down more than 50% since the start of the year, it's a pretty good signal that Energy Transfer Partners (NYSE: ETP) experienced some troubles in 2015. While the overall malaise in the energy sector contributed to some of the unit price weakness, there were some internal factors that also weighed on the company's performance. Three segments in particular were weak this year, delivering year-over-year declines in Segment Adjusted EBITDA. However, even more concerning is the fact that another segment is starting to materially weaken.

On the surface, everything looks OK

If we take a bird's eye view of Energy Transfer Partners' business, it would appear that the company is having a good year. Through the first three quarters of the year the company's total Segment Adjusted EBITDA is up 2.8% to $6.4 billion. In fact, many of the company's segments are enjoying strong years: 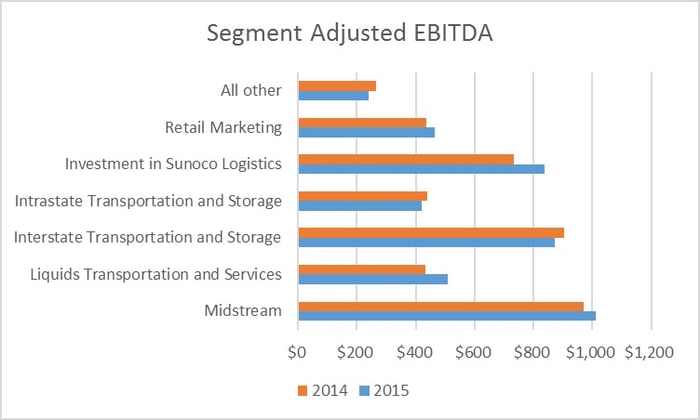 Data Source: Energy Transfer Partners. (NOTE: In millions of dollars and through the first three quarters of the year.)

The company's investment in Sunoco Logistics (NYSE: SXL) in particular has been strong this year. Through the first three quarters, Energy Transfer Partners' attributable Adjusted EBITDA is up 13.9%, which is driven by contributions from Sunoco Logistics' Mariner NGL pipeline projects, as well as improved operating results at its Marcus Hook and Nederland terminals.

Energy Transfer Partners experienced similar gains in its Liquids Transportation and Services segment due to improved NGL volumes on its Lone Star Gateway pipeline system and higher fractionated volumes due to the ramp-up of its second fractionator at Mount Belvieu.

That said, we can largely dismiss the "all other" segment for two reasons. First, it holds a variety of the company's investments in other entities such as a refining joint venture and an entity that owns and operates coal handling facilities. Second, the main reason for the year over year drop is the fact that Energy Transfer Equity sold its investment in AmeriGas Partners (NYSE:APU) in August of 2014. In the first quarter alone the loss of AmeriGas Partners' contributions resulted in a $51 million year over year decrease in Segment Adjusted EBITDA from the all other segment.

The other two segments, on the other hand, are a different story. The company's Interstate Transportation and Storage segment battled issues all year. In the first quarter, warmer weather resulted in decreased volumes from the Panhandle pipeline while a customer maintenance related outage led to a decrease in volumes at its Sea Robin Pipeline. In the second quarter, lower customer demand led to a decrease in volume on the Trunkline Gas pipeline. Finally, last quarter the Trunkline Gas pipeline was again weak, this time due to the roll off of a contract so that one of the pipelines can be repurposed for crude oil service. Meanwhile, the Intrastate Transportation and Storage segment battled one issue all year, which was lower production from key shippers in the Barnett Shale region.

One issue to watch
Finally, while Energy Transfer Partners' midstream business appears strong, that's largely due to the first two quarters. Both experienced year over year increases in volumes as well as total gross margin. Last quarter, however, total gross margin really collapsed due to a significant drop in earnings from non fee-based contracts and processing resulting from lower commodity prices. That makes this segment a key one to watch going forward, especially because it was a key contributor behind the company's weakening distribution coverage ratio, which has fallen from 1.18 times in the first quarter to just 0.84 times last quarter.

Investor takeaway
Energy Transfer Partners' rough year is partially due to rather persistent weakness in two of the company's key segments. Even more worrisome, however, is the new weakness that is just starting to emerge at its midstream segment, which last quarter was the main culprit that pulled down its distribution coverage ratio to a very concerning level. It's a segment that will need to turn around quickly so that it doesn't pull down the company's distribution rate.