This article was published on Dec. 21, 2015. To see The Motley Fool's latest coverage of The Kroger Co., check out our KR ticker page.

­Kroger Co. (NYSE:KR) is setting new highs on a wave of strong results. As of Dec. 17, 2015, the stock was up 30% over the past 12 months as the company continues to outperform the market's expectations. Kroger's sales growth is especially impressive in light of Wal-Mart's (NYSE:WMT) sluggishness this year.

After several quarters of exceptional growth, investors' expectations have risen. It's now clear that Kroger has a bright future, and the stock price reflects this sentiment. But with all the positive attention, can Kroger continue to impress?

Crushing the competition
Kroger is growing in a stagnant industry. It posted 5.4% identical-store sales growth in the third quarter, extending its streak to 48 straight quarters of growth. Moreover, Kroger's growth hasn't come at the expense of profitability; the company's operating margin is holding steady at about 3% and its gross margin has improved by 1.1 percentage points over the past two years, to 21.7%.

Kroger's performance is in stark contrast to multinational rival Wal-Mart. While Kroger's stores grow sales at a mid-single-digit rate, Wal-Mart struggles to keep pace with inflation. In its most recent quarterly report, Wal-Mart revealed a measly 1.5% increase in same-store sales at its U.S. stores (excluding Sam's Club). Wal-Mart's operating profit margin has declined at the same time, leading to a wicked contraction in earnings expectations. 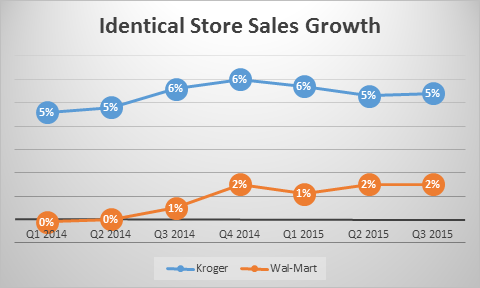 Wal-Mart's loss is Kroger's gain. The combination of unusual sales growth and a widening profit margin gives Kroger a unique tailwind in a mature industry. The competition will have to adjust if it wishes to slow Kroger's ascent.

Is it too late to buy?
Kroger's distinct approach enables it to outmaneuver much of the competition. A large percentage of its sales consists of higher-margin private-label products. Kroger manufactures about 40% of its private-label products, giving it even higher margins than usual. This method gives Kroger a crucial cost advantage in an industry that competes primarily on price.

Moreover, Kroger has taken a play out of the Costco Wholesale (NASDAQ:COST) and Sam's Club playbooks by using fuel centers to draw in customers. About half of Kroger's locations have fuel centers, distinguishing those locations from traditional grocers and neutralizing the appeal of fuel centers at Costco and Sam's Club.

However, the grocery industry is extremely competitive, and non-existent switching costs make low prices the ultimate selling point for consumers. Although Kroger's private-label offering gives it a leg up on traditional grocers, the company is particularly vulnerable to price competition from membership-format stores such as Costco.

Costco prices its products lower than Kroger and makes its profit from membership fees. While Kroger marks up its products enough to earn an impressive 21% gross margin, Costco cuts its prices to the bone, marking up its products just enough to cover the cost of operating its stores. This approach gives Costco a distinct price advantage. 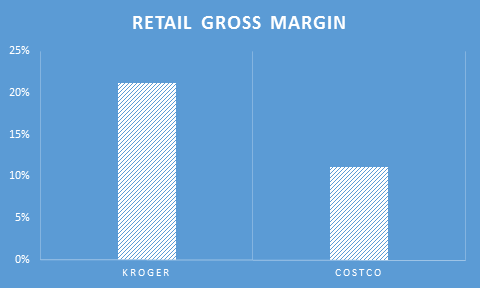 Kroger's size provides its best antidote to club stores. The company owns 2,620 U.S. locations under various banners, compared with 487 Costco locations and 656 Sam's Club locations in the U.S. and Puerto Rico. However, the low-cost club warehouses limit Kroger's appeal in dense urban centers and may serve as a check on Kroger's future growth.

With Kroger's forward price-to-earnings ratio of 19 and a PEG ratio of nearly 2, the market is already pricing in lots of growth -- which means there's no allowance for additional competitive pressure. That's a risky bet to make in the grocery industry -- and a sign that Kroger's stock price may have most of its market-beating gains behind it.