Microsoft has made plenty of missteps in mobile, and its Windows Phones continue to suffer as a result.

It's no secret that Microsoft (MSFT -2.20%) has a major smartphone problem. It's not that the company hasn't tried to get its Windows phones off the ground. It worked closely with Nokia to produce a wide range of devices, then bought Nokia's mobile division for $7.2 billion, only to write down the purchase earlier this year.

If that weren't enough, the global market share of Windows phones has continued to decline over the past few years. That's particularly bad considering the devices took about 3% market share at their peak.

All of these missteps and and failures along the way have earned Windows phones the worst Microsoft product designation this year. Some may argue that Microsoft hasn't made its own smartphones until recently, so it's not the company's fault for its poor performance. But I'd argue that software is the main ingredient to any mobile device, and the company has made plenty of blunders that have hurt its own product.

More than just a slow start
Over the past three years, Windows phones have barely registered on the smartphone market share radar. The graph below shows how Microsoft's phone software has remained stagnant since 2013, and even hit one of its lowest points in the second quarter of this year. 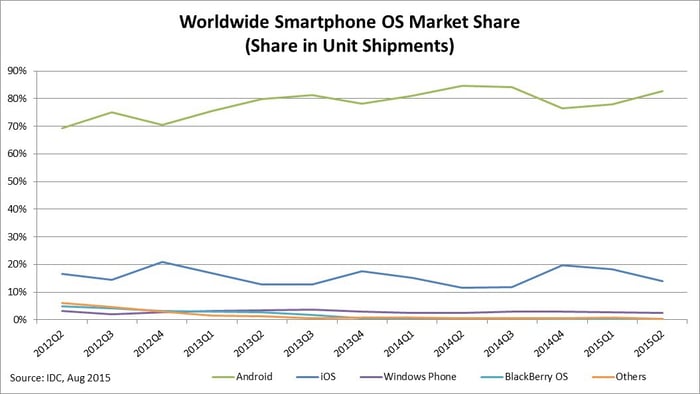 It used to be easy to pin at least part of the blame for Windows phones failings on Nokia, but things haven't gotten better since the Nokia mobile division purchase. Aside from the writedown, Microsoft cut 7,800 jobs (most related to the Nokia purchase) and has yet to yield anything fruitful from the purchase. The company is essentially in the same position it was years ago, but with the added dilemma of having spent billions to get nowhere.

"Since its acquisition of Nokia in 2014, Microsoft has been revamping the product portfolio with Microsoft branded Lumia devices. But now that Microsoft has decided to take a loss on its Nokia purchase, the scenario for Windows Phone looks bleaker," IDC recently said.

Microsoft is still allowing developers to port iOS apps, but it's pulling back on making it easy for Android apps to jump to Windows. While this arguably could be a smart move by Microsoft in the long term, the decision to scrap the plans after telling developers they would soon have an easy way to bring over their Android apps likely created yet another reason for smartphone app developers to leave Windows alone.

In a similarly frustrating move, when Microsoft introduced its new Lumia 950 and 950 XL smartphones a few months ago, the company limited the sales to just AT&T's retail and online stores. This type of exclusivity worked for Apple's (AAPL -2.01%) iPhones in the past, but that's because the devices garnered enough customer demand. For Microsoft, the AT&T partnership means fewer people have access to the devices, and it all but ensures they won't be successful.(T 1.05%)

Formidable opponents abound
Unsurprisingly, Windows phones aren't making Microsoft any money, and when you compare the profits (or lack thereof) to Apple and other smartphone vendors, things look pretty sad. 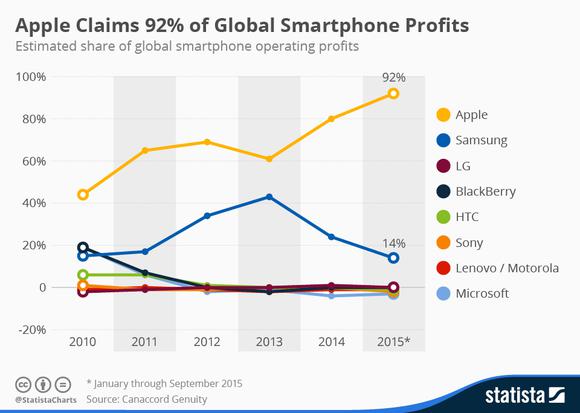 While Apple's share of worldwide smartphone profits has skyrocketed from 40% in 2010 to 92% this year, Microsoft's has remained under 0% for a few years now. If you're wondering how it has less than 0%, it's because Microsoft is regularly losing money from its phone division.

And things may not turn around any time soon. "Despite the announcement of Windows 10, we expect Windows smartphone market share will continue to be a small portion of the overall smartphone OS market as consumers remain attracted by competing ecosystems," Gartner said.

While I think Windows 10 could eventually help spur some sort of turnaround for Windows phones, it's hard to see right now how that will happen. Sure, integrating Windows 10 across PCs, tablets, and phones is the right move, but at this point, it's hard to imagine a world where the masses prefer a Windows smartphone to an iOS or Android device -- and Microsoft only has itself to blame.

Chris Neiger has no position in any stocks mentioned. The Motley Fool owns shares of and recommends Apple. We Fools may not all hold the same opinions, but we all believe that considering a diverse range of insights makes us better investors. The Motley Fool has a disclosure policy.