Please ensure Javascript is enabled for purposes of website accessibility
Log In Help Join The Motley Fool
Free Article Join Over 1 Million Premium Members And Get More In-Depth Stock Guidance and Research
By Brian Feroldi, Selena Maranjian, and Sean Williams - Dec 21, 2015 at 8:19AM

Our Motley Fool contributors named these three biotech stocks as their top ideas heading into 2016.

This article was originally published on December 21st, 2015, and was updated on May 16th, 2016, to reflect updated information.

2015 was another good year for the biotech sector. The iShares Nasdaq Biotechnology ETF (IBB 0.50%), an exchange traded fund that holds a diverse collection of biotech stocks, outperformed the S&P 500 by a healthy margin. 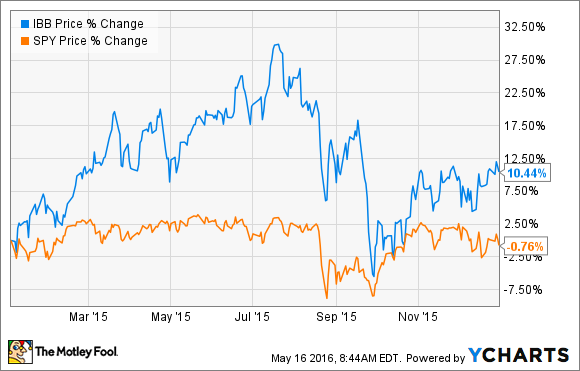 Biotech stocks have been a great place to have money invested for several years now, so in that spirit, we reached out to our team of Motley Fool contributors and asked them to share their top biotechnology stock idea for 2016. Read below to see what biotech stocks we think are primed to outperform in the year ahead.

Selena Maranjian: Biogen Inc (BIIB 3.40%) is a stock I'd strongly consider buying in 2016 -- if I hadn't already snapped up some shares some months back. Its stock has fallen by more than 33% over the past year as management reorganizes (and downsizes, shedding about 11% of the workforce), and this to me presents a buying opportunity.

Biogen leads the market in multiple sclerosis (MS) drugs and has a blockbuster with its MS drug Tecfidera. Its pipeline features a handful of drugs in late-stage development, such as ones targeting Alzheimer's disease, spinal muscular atrophy, diffuse large B-cell lymphoma, indolent non-Hodgkin's lymphoma, and many more in earlier development stages. There's blockbuster potential in its pipeline, too -- with many having high hopes for its Alzheimer's candidate -- though candidates still have to do well in final trials, earn FDA approval, and then sell well. Biogen is aiming to boost Tecfidera sales (a slow-down was part of the reason the stock has declined lately) through direct-to-consumer marketing, such as via TV commercials.

Some wonder whether Biogen might begin paying a dividend in the near future. Investors shouldn't count on that, but in the meantime, Biogen has been repurchasing plenty of shares, which is another way to reward existing shareholders. Share count has fallen from about 345 million in 2006 to 219 million recently.

Revenue has roughly doubled over the past four years, while net margins have grown, recently near 42%. For those seeking biotech exposure in their portfolios, Biogen is worth consideration, as it's a large and proven company, with multiple drugs on the market and selling well, and many additional promising drugs in its pipeline.

Brian Feroldi: While 2015 was a decent year to have money in biotech stocks in general, investors in Medivation (MDVN), a profitable biotechnology company focused on treating cancer, were left behind. Medivation's stock shed nearly 5% of its value during the year, and it ended the year trading at a trailing price-to-earnings ratio of only 34. I think is simply too cheap for a company that continues to show fast growth, so I feel quite bullish about this company's prospects heading into 2016.

Shares are up more than 1,170% over the past five years thanks to the huge success of Xtandi, Medivation's metastatic castration-resistant prostate cancer drug. Xtandi continues to show stellar growth numbers, which allowed Medivation as a whole to put up total revenue growth of 32% for the full year. The odds look good that Xtandi will be able to continuing growing for years into the future as it is currently in late-stage clinical trials for treating breast cancer.

Medivation also has a second cancer drug in late-stage trials called talazoparib. This PARP inhibitor showed promise in trials as a potential treatment for breast cancer. Medivation is planning on providing investors with updated clinical results for talazoparib sometime in the middle of 2016. If those updates look good, then talazoparib could be submitted for approval soon after, which may be a great catalyst that helps get Medivation's stock moving in the right direction again.

Given its fast growth rates, exciting late-stage pipeline, and bargain stock price, I think Medivation is a great deal right now.
Sean Williams: For those of you looking for a higher-risk, higher-reward play, I'd consider Lexicon Pharmaceuticals (LXRX 5.99%) as a top biotech stock for 2016.

The way I see it, Lexicon Pharmaceuticals has three major catalysts working in its favor. First, Lexicon met its primary endpoint in both the TELESTAR and TELECAST phase 3 trials involving telotristat etiprate, a treatment for carcinoid syndrome in cancer patients with metastatic neuroendocrine tumors. In TELECAST, telotristat etiprate in both the 250 mg and 500 mg doses led to a statistically significant reduction in urinary 5-HIAA levels, whereas in the TELESTAR trial, both doses led to a statistically significant reduction in bowel movements. Both trials evaluated patients over a 12-week period. Success in both late-stage studies sets Lexicon up for potentially its first approval of a commercial product in 2016.

Secondly, Lexicon is riding high after securing a collaborative deal with Sanofi (SNY 2.52%) in November for SGLT1 and SLGT2 inhibitor sotagliflozin. Under the terms of the deal, Lexicon is to receive $300 million upfront, and it may qualify for $1.4 billion in development, regulatory, and sales milestones. Sanofi has agreed to handle the clinical development of the drug for type 2 diabetes, with Lexicon handling development for type 1 diabetes. This deal removed any near-term cash concerns for Lexicon and should allow it and its shareholders to focus solely on clinical progress (and a potential telotristat etiprate launch) in 2016.

Finally, Lexicon is expected to report phase 3 data for two of its three ongoing type 1 diabetes studies for sotagliflozin by roughly September 2016 (according to ClinicalTrials.gov). These 24-week trials assess the change in A1C levels from baseline, and a separate study examines the change in baseline A1C versus a placebo. The third study, expected in Q1 2017, is examining what proportion of trial patients have A1C levels below 7% at the 24-week mark, and it has secondary efficacy endpoints that include body weight and systolic blood pressure changes from baseline. Because SGLT2 inhibitors have demonstrated weight loss and improved glycemic control in trials, the hope is that a double-dose of SGLT1 (which works in the gastrointestinal tract) and SGLT2 (which works in the kidneys) could be the most effective diabetes therapy to hit the market.