The automaker has pursued an unorthodox strategy to disrupting the auto market, but it's working great.

It's not an exaggeration to say that Tesla Motors (TSLA 3.94%) has literally flipped disruption theory on its head. Classical disruption theory suggests that most disruptive entrants start at the bottom of the performance curve, and slowly work their way up until they can eventually overtake incumbent technologies.

But Tesla started at the absolute top of the performance curve. The Secret Tesla Motors Master Plan (just between you and Elon Musk) all along has been to appeal to the high-end niche in order to fund ongoing development until a mainstream electric car can be produced at affordable price points:

In keeping with a fast growing technology company, all free cash flow is plowed back into R&D to drive down the costs and bring the follow on products to market as fast as possible. When someone buys the Tesla Roadster sports car, they are actually helping pay for development of the low cost family car.

This unorthodox strategy has worked incredibly well for the upstart automaker as it continues to execute on its vision. Here are two benefits of this strategy.

Goodbye, Osborne effect
PC historians out there may remember the Osborne effect, where an early computer maker pre-announced a new model so far in advance that sales for the existing model plummeted and the Osborne Computer Corporation went bankrupt as a result. Most of Tesla's rivals are starting at the low-end of the market and developing their technology from there, making meaningful performance gains along the way.

Consider Nissan (NSANY 2.96%) and its electric Leaf, which is one of the best-selling electric cars in the U.S. right now. Sales have been weak all year, but they took a turn for the worse when Nissan announced the 2016 Leaf in September. The new models have a 30 kWh battery capable of driving for an EPA-estimated 107 miles, up from the 24 kWh battery and 84-mile range of the outgoing model. Sales took a hit as buyers waited for the new models. Fortunately, they didn't have to wait long, as the 2016 Leaf was launched in November in limited volume. 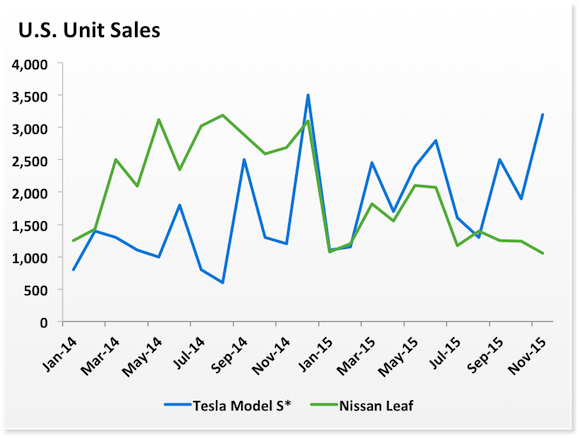 Since Tesla is starting out at the top end of the performance curve, there is no meaningful Osborne effect. Beyond the fact that Tesla doesn't really pre-announce new models or offerings and just launches them, the types of performance improvements that Tesla delivers are more incremental than what its rivals are hoping to achieve.

Tesla is naturally trying to develop performance improvements as well, but its existing models are already more than sufficient in terms of performance, while the lower-end Leaf has a much greater likelihood of testing a driver's range anxiety and charging patience. That 27% increase in range is worth the wait if you know it's right around the corner.

Tesla is a lifestyle brand
Because of Tesla's premium positioning in the electric car market, the company is more of a luxury lifestyle brand than its rivals. This gives the company far greater pricing power and sustained demand, even in the face of plunging gas prices.

Falling gas prices are hurting demand across the board for the current crop of affordable electric cars, which typically start around $30,000. However, Tesla's sales continue to rise; third-quarter deliveries set a new all-time record of over 11,600 new vehicles. The reason is that prospective Tesla buyers are not particularly price-sensitive when it comes to gas prices. They are considering buying a car that starts at $70,000 after all, and let's face it: no one buys a Tesla purely for the gas savings.

The breakeven period is simply way too long to justify buying a Tesla to save money at the pump. People buy Teslas because they believe in what the company stands for, and because they want to buy in to the premium lifestyle and brand association that Tesla offers. They probably dig fast cars, too. While price-conscious consumers very likely factor in gas prices when deciding whether or not to buy a mainstream model like a Leaf, because the breakeven period is more realistic when you're talking about a $10,000 price premium instead of a $50,000 price premium.

It also ties back to the performance argument above. Since Teslas have no performance compromises, they appeal to a wide range of high-end buyers, too, such as those that are willing to pay up for a P85D with Ludicrous mode in order to get a 0-60 speed of 2.8 seconds ($30,000 more than a standard 85D).

Fuel savings are the primary value proposition for the affordable rivals, which make performance sacrifices compared to gas-powered cars, so sales naturally suffer if the oil market neuters that proposition. While the broader U.S. electric car market is contracting due to falling gas prices (with year-to-date total sales estimated around 103,000 compared to 123,000 for all of 2014), Tesla is doing just fine. That's because in contrast, fuel savings are probably the least compelling reason to buy a Tesla, which is why the company seems so immune to fluctuations in gas prices.

Moving on down
Here's the best part. Even after Tesla successfully moves downmarket with the Model 3, these benefits will likely persist. Since Tesla developed the technology from the high-end, even its affordable models will offer dramatically higher performance than rivals, and brands are particularly long-lasting assets once you build them up.

Virgin Orbit's Got Bigger Problems Than You Realize