What: Shares of LINN Energy (OTC:LINEQ) have climbed more than 33% in mid-morning trading following an uptick in oil prices. LINN's surge is the leader for a slew of other highly indebted oil and gas producers today.

The following is just a quick sample of the companies that have seen shares climb more than 10% in morning trading.

So what: Typically, when a company's shares climb as much as LINN's have in a day, you would think some sort of significant news story came out, like a change to its distribution policy. Not today. Today's price spike looks to be attributable to the fact that both oil prices and high-yield (aka junk) bonds funds have climbed today. It shouldn't be too surprising that all of the companies listed above and their rather high debt levels are all rated below investment grade.

Now what: For all of these companies listed, it's going to take a lot more than a single-day spike to get back on track. Ever since oil prices started to slide a little less than 18 months ago, Continental Resources has been the most resilient of all these stocks and it has lost more than two-thirds of its value. 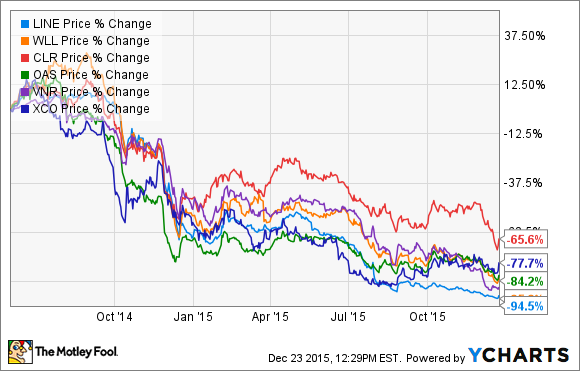 What all of these companies need most of all is a path to reducing debt loads. Obviously, higher oil and gas prices could help on that end, but these companies need to pull other levers as well. Both LINN and Vanguard Natural Resources have cut or suspended their distribution payments to shore up cash flows, and all of the companies mentioned have wildly scaled back their capital spending budget and shed non-core assets like pipelines. However, unless we see a major uptick in prices, chances are that all of them may need to result to other methods to reduce debt such as unloading assets to anyone who can buy today.

Don't let today's price spike get you too excited about the prospects of these companies -- they all still have a long way back to prominence. Until we see some tangible moves that result in lower debt and more disciplined spending, investors are best suited to wait these companies out.