If you're looking to add some dividends to your portfolio, here are five worth considering in 2016.

The case has been made many times that dividend stocks are one of the best methods for growing your wealth over the long term. For that investing style to work, though, you need to invest in dividend stocks that will have the ability to grow those payouts for years to come.

So to help you get started with your own dividend portfolio in 2016, we asked our own motley crew of contributors to highlight a dividend stock that has years of stable dividend growth ahead of it. Here's what they had to say:

Dan Caplinger
Reliability is an important attribute for a dividend growth stock, and 3M (MMM -2.33%) has a long history of delivering higher dividends to investors. For 57 years, the Dow component has boosted its dividend payouts on an annual basis, overcoming changing economic conditions year after year to give shareholders their due. Most recently, 3M gave investors a nearly 20% dividend increase early this year, and the company routinely raises its payouts early in the year, which should give investors an additional raise within the next few months.

Some investors worry that 3M's growth could slow, especially given its recent guidance toward weaker results for the remainder of this year. Yet the company still thinks it will see earnings growth of 7% to 12% in 2016, and with a dividend payout ratio of just over 50%, 3M has plenty of room to give investors a generous increase in its quarterly distributions without putting its healthy balance sheet at risk. 3M is vulnerable to the same economic trends as other cyclical companies, but it has demonstrated for decades that it can overcome those obstacles and produce long-term growth both in earnings and in what it pays to shareholders in dividends.

Daniel Miller
If investors are looking for an intriguing stock that is both growing in general and growing its dividend consistently, Polaris Industries (PII -0.50%) perfectly fits the bill. Polaris is one of the most-respected, well-known, and innovative brands within the powersports market, and its share of North American powersports sales has gone from the middle of the pack in 2009 to a dominating No. 1 position. 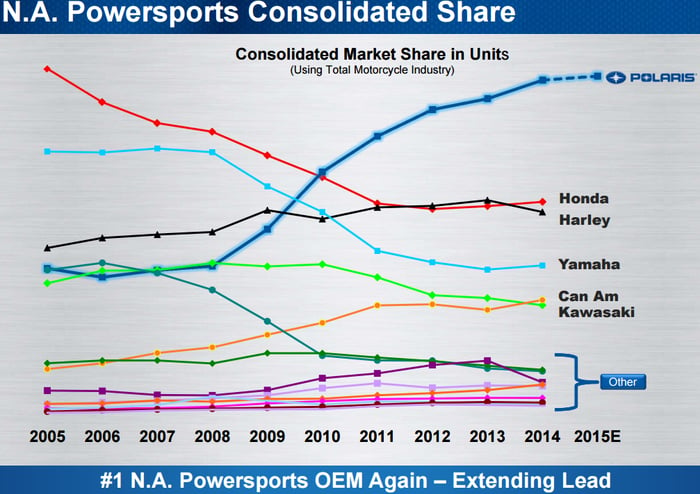 Similar to the great performance from its snowmobile, motorcycle, and 4x4 products, its financial performance has been strong over the past five years. Polaris' five-year total return through the end of October, including dividend yield, was an impressive 240%, which trumped both the S&P 500's 94% and its peer average of 14%.

Zeroing in on its growing dividend -- which is currently $0.53 per share quarterly, for a yield of roughly 2.3% -- Polaris' five-year dividend compound annual growth rate is more than 20%. The good news for investors is that Polaris' overall sales growth, as well as its dividend growth, should continue as the company continues to invest wisely in its future products and acquisitions. For proof of that, consider that Polaris' return on invested capital has checked in above 40% each of the last four years.

No matter how you look at it, Polaris appears to be well positioned to grow in the years ahead.

Steve Symington
I only recently pounded the table on Disney (DIS -2.21%) as a great stock to buy in December. But keeping in mind that Disney typically aims to return at least 20% of the cash it generates to shareholders in the form of dividends and share repurchases, I feel Disney's promise is worth reiterating for investors as 2016 nears. And that's especially so with Star Wars: Episode VII -- The Force Awakens continuing to shatter box office records as I write this.

Episode VII promptly gathered gross ticket sales of $57 million in Thursday-night previews last week -- crushing the previous Thursday-night record of $43.5 million held by Harry Potter and the Deathly Hallows Part 2 -- and pulled in a staggering $248 million for the full opening weekend. For perspective, the highest December launch of all time previously belonged to The Hobbit: An Unexpected Journey at $84.6 million, which itself went on to collect a respectable $1.02 billion in sales worldwide by the end of its own box office run. And Disney already has four more Star Wars films slated for release through the end of 2019, including two offshoot films and Episodes VIII and IX, so let it suffice to say Disney's $4 billion acquisition of LucasFilm was as astute as it comes for its thriving Studio segment.

Speaking of which, Disney has an equally impressive schedule slated outside of the Star Wars franchise for 2016, including Marvel's Captain America: Civil War and Alice Through the Looking Glass in May, Pixar's Finding Dory in June, and Doctor Strange in November. That's also not to mention the near certainty that the success of these movies will collectively drive Disney's higher-margin consumer products segment to another record year in 2016.

At the same time, the wild card remains in Disney's core media networks business, which singlehandedly generated more than half of Disney's total operating profit last year. But as fellow Fool Rick Munarriz pointed out recently, media networks also remained Disney's only segment that failed to grow operating income at a double-digit percentage rate last fiscal year, growing instead at "just" 6%. Within that, arguably most concerning is the fact that ESPN continues to lose subscribers as the effect of cord-cutters becomes more evident with each passing year. Over the long term, however, I still think Disney's Media Networks are powerful enough and well-positioned enough to adapt to our changing media landscape, whether it means offering channels like ESPN a la carte directly to consumers or striking inclusion deals as it did earlier this year with DISH's Sling TV.

In the meantime, however, there are plenty of catalysts in Disney's other businesses to offset these concerns. And I think investors who buy in 2016 with the intention of holding Disney for the long run will be happy they did.

Tyler Crowe
Considering how much the market has beaten down the energy sector and master limited partnerships lately, I can understand how some investors might be a little wary of getting involved in the sector. Despite the major declines in stock prices and the recent dividend cuts in the sector, one company that really stands out as a stable dividend grower is Magellan Midstream Partners (MMP 0.26%).

One of the major advantages that Magellan has over so many other pipeline companies is that a majority of its operational profits come from the transport of refined petroleum products such as gasoline and diesel. These kinds of products don't see the fluctuations in supply and demand that crude oil and natural gas do, so volumes across its system are pretty consistent. Also, Magellan's pipeline network has the added advantage of being the exclusive supplier for many parts of the country, which means its tariffs are regulated by the Federal Energy Regulatory Commission.

What makes this company appealing compared to so many other master limited partnerships, though, is that its conservative management has positioned it to withstand downturns in the commodity cycle. It still generates more than enough cash to fund payouts to its investors as well as reinvest in the business.

I can't say for certain when the energy market will rebound, but Magellan Midstream Partners is one of the few in the space that actually is built for the ups and downs of the market. With a greater than 5% yield and a 14-year streak of increasing its payout, Magellan looks like a pretty compelling investment in 2016.

George Budwell
AbbVie (ABBV 0.25%) is one of the few names in healthcare that offer both a healthy dividend yield (at around 4%) and particularly strong growth prospects in terms of their bottom and top lines going forward.

For investors new to this stock, the company's main value driver is its megablockbuster anti-inflammatory drug, Humira. Despite this drug coming off patent protection in the U.S. in 2016, management thinks Humira can still generate sales in excess of $18 billion by 2020.

Behind Humira, AbbVie's next most important product is its blood cancer drug, Imbruvica, which was acquired during a $21 billion buyout of Pharmacyclics earlier this year. Between them, AbbVie thinks these two key drugs can help drive double-digit adjusted earnings-per-share growth through 2020 and perhaps beyond. If true, this would put the drugmaker in elite company in the context of large-cap growth stocks that pay a dividend.

While there are some lingering concerns that AbbVie's projections for these two drugs are overly optimistic, the company does sport a well-diversified clinical pipeline that has the potential to produce 20 new drugs or indications over the next few years. Some of these experimental drug candidates, like ABT-199 -- which is currently in several ongoing clinical studies for a variety of blood-based disorders -- definitely have the potential to make up for any shortfalls on the revenue front, if Humira or Imbruvica fail to live up to expectations.

All told, AbbVie does come with some notable risks such as a highly leveraged balance sheet stemming from its recent M&A activity, along with Humira's looming patent expiration. However, the company's industry-leading growth potential, combined with the fact that it's a Dividend Aristocrat, are certainly good reasons to dig deeper.