Please ensure Javascript is enabled for purposes of website accessibility
Log In Help Join The Motley Fool
Free Article Join Over 1 Million Premium Members And Get More In-Depth Stock Guidance and Research
By Timothy Green, Matthew DiLallo, and George Budwell - Dec 24, 2015 at 7:21AM

Investing in individual stocks isn't for everyone.

While much is written about individual stocks, index funds offer investors a simple way to diversify their portfolios. Broad-based ETFs that track the whole market are extremely popular, but ETFs that focus on individual sectors or industries can be used by investors to bet on a particular trend without the risk associated with picking individual stocks. Our Foolish contributors have identified three of the best ETFs for investors to consider for 2016.

Tim Green: Cybersecurity is a hot topic these days, and there are a large number of companies scrambling to win market share. Worldwide spending on information security grew by about 5% in 2015, reaching $75.4 billion, according to Gartner, and the most optimistic estimate calls for the market to grow to $170 billion by 2020. According to Cisco, the cybersecurity market is overcrowded, with the average large enterprise having more than 50 separate security vendors.

Shares of some cybersecurity companies have tumbled during the past few months, with overheated valuations likely to blame. FireEye, which is expanding quickly, but posting huge losses, has seen its shares fall by about 40% during the past three months, driven by results that didn't quite meet lofty expectations. Picking long-term winners in the cybersecurity market is a difficult task, but the HACK ETF allows investors to make a broader bet on the industry itself, minimizing the risks associated with investing in individual companies.

George Budwell: If you want exposure to the high-flying biotech industry without the dizzying amount of volatility that often accompanies individual stocks, the iShares Biotechnology ETF (IBB 1.72%) is probably your best bet. This ETF is designed to track the performance of the Nasdaq Biotech Index, but comes at around a tenth of the price ($330 vs. $3,470), making it a good way to add a diverse array of biotech and biopharma stocks to your portfolio.

Perhaps the best part is that the biotech ETF allows investors to lower their risk of running into the buzz saw that it is the ongoing drug-pricing debate. Without question, there are going to be some heavy casualties in biopharma because of this hot-button issue, and there's no way of knowing which stocks are truly on solid ground moving forward.

In the same breath, biotech has proven to be one of the fastest-growing industries during the last five years, crushing the broader markets in the process: 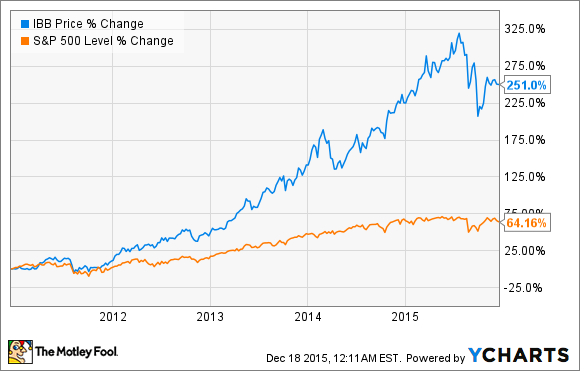 Looking ahead, this trend appears likely to continue based on the rapid evolution of entirely new drug classes that's occurring right now. So it's probably a bad idea to totally avoid the biotech industry simply because of the drug-pricing debate. At the same time, a well-diversified approach, that lowers the risk of stepping in a sinkhole, so to speak, seems warranted in the current environment.

Matt DiLallo: Despite persistent weakness in 2015, there is the potential for oil prices to rebound in 2016. That's largely due to the fact that demand growth continues to be strong while supplies are beginning to turn over. It's a scenario where the rising tide of higher oil prices would lift all the boats in the oil sector, making an oil-focused index fund one way to invest in that upturn.

While there are a number of options, the iShares U.S. Oil & Gas Exploration & Production ETF (IEO 1.87%) is, in my opinion, one of the best funds to invest in the rebound in the U.S. oil sector. That's because the fund is designed to "track the investment results of an index composed of U.S. equities in the oil and gas exploration and production sector." In other words, unlike most other funds that are heavily weighted to global oil giants, this fund tracks U.S. independent exploration and production companies, with its largest holdings being ConocoPhillips (COP 2.64%) and EOG Resources (EOG 3.19%). While both do own international assets, domestic production is their prime growth engine.

This flexibility is lacking at the giant oil companies, which is why a domestic focused ETF such as iShares U.S. Oil & Gas Exploration & Production could outperform when conditions improve. It's that upside potential that makes it one of the best funds for 2016.

3 Dividend Stocks That Retirees Should Avoid