Wal-Mart's No. 1 selling product explains a lot about its business.

Wal-Mart Stores' (WMT 0.77%) best-selling product isn't something you'd probably guess. The world's largest retailer may be best-known for selling $2 t-shirts, cheap toys from China, and pretty much everything else under the sun, but its most popular product is something more mundane. It's the most popular fruit in the country -- the banana.

Wal-Mart sells more than 1 billion pounds of the tropical fruit every year. Bananas are generally known as the cheapest food in the grocery store, and their low price suits Wal-Mart's shoppers, as well as its convenience and health benefits. 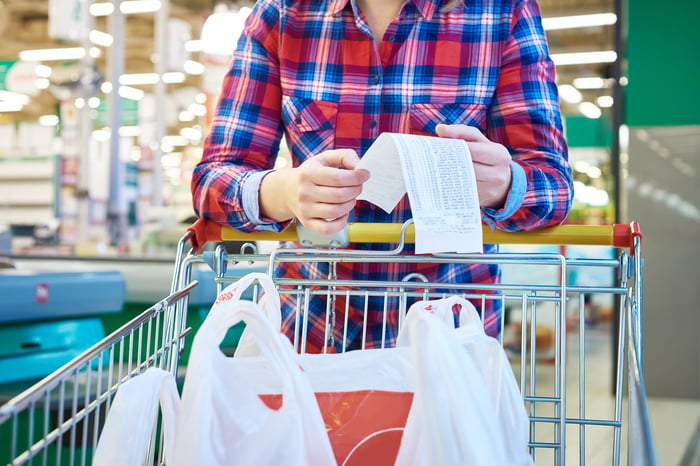 Wal-Mart is not only the world's largest retailer, but also the nation's No. 1 grocer. The company's sales soared through the 1990s and 2000s as it expanded its discount stores to add grocery departments, converting them into Supercenters. The prominence of the banana is a testament to Wal-Mart's dominance of the grocery sector.

The retailer makes 56% of its sales from that segment, dwarfing all other categories and all of its competitors. Domestically, the company does close to $200 billion a year in grocery revenue, which is nearly double that of the country's No. 2 grocer, Kroger.

An economic moat for Wal-Mart
In many investors' eyes, 2015 has been Wal-Mart's worst year in recent memory. Headwinds from currency translation have combined with wage hikes and competitive challenges to put a significant dent in profits. As a result, the stock price has fallen by more than a third from its February peak. However, Wal-Mart may not be as weak as it looks, as its dominance of the grocery segment gives it a competitive advantage as retail shifts to the e-commerce channel.

Amazon.com (AMZN 3.04%) has been trying to crack into grocery sales for years, testing the market with its AmazonFresh delivery services in a handful of cities. While Amazon has been successful in undermining Wal-Mart in a number of categories such as electronics, and it may have stolen the low-price crown from the brick-and-mortar giant, groceries will continue to present a challenge to the e-commerce leader.

Grocery is a huge segment in retail, on pace for over $600 billion in sales this year, just behind general merchandise. Cracking the grocery segment represents a huge opportunity for Amazon, but doing so requires the ability to deliver perishable items that shoppers often want on demand. Not only do these items require trucks with coolers and freezers, but the delivery boxes must keep groceries at temperature if the shopper is not home to receive them. In other words, it runs counter to much of Amazon's business model, giving Wal-Mart perhaps its biggest advantage over its No. 1 rival.

While Amazon has struggled to grow AmazonFresh, Wal-Mart is seeking to extend its leadership in grocery by expanding its online grocery pick-up program to stores in several metro areas, including Atlanta, Charlotte, and Tucson. Customers simply select their items online and then proceed to the pick-up center at their convenience, where a Wal-Mart employee loads the groceries into their car.

Mainitaining its top position in grocery sales won't assure Wal-Mart continued growth as the category is only slowly expanding, but its ability to sell a billion pounds of bananas is a testament to its size and market power. I would expect Wal-Mart's dominance of this segment to continue for many years ahead.