Whether you realize it or not, marijuana is on track to possibly be one of the deciding factors in the 2016 presidential election. As marijuana's approval rating has soared in national polls over the last decade, it's forced politicians who'd previously tiptoed the issue to take a stance.

Marijuana's clout
On a state level, we could see major changes in the 2016 elections. It's possible that as many as one dozen states could wind up voting on a recreational marijuana initiative or amendment, including California, which boasts the largest economy of the 50 states. President Obama has gone on record as saying that the best way to get Congress' attention is to continue to approve marijuana at the state level, and 2016 could be a major step in that direction.

For some consumers, access to marijuana means having a new treatment pathway available. Marijuana has shown promise in a number of clinical studies, ranging from palliative care where cancer pain is involved to stemming epileptic seizures and even fighting cancer proliferation.

For states, marijuana is a big green dollar sign. The tax revenue generated from marijuana can help fill budget gaps and create jobs. In Colorado, for instance, residents of the state voted overwhelmingly in favor of Proposition BB this November, which will divert $40 million of retail marijuana tax revenue from 2014 to the state's education system.

This study shows why some people are still skeptical of marijuana
But not everyone is "seeing green." There are plenty of people out there who question the long-term safety profile of marijuana and worry that legalizing the drug could lead to an increase in crime, more frequent incidences of driving under the influence (in this case of marijuana), and other societal declines.

However, a more immediate concern jumps to the forefront when examining the recently-released Monitoring the Future survey results. Monitoring the Future, or MTF, is a study sponsored by the National Institute on Drug Abuse and conducted by the University of Michigan. In the latest survey, 44,892 adolescent students participated from 382 schools, both public and private, across the United States. 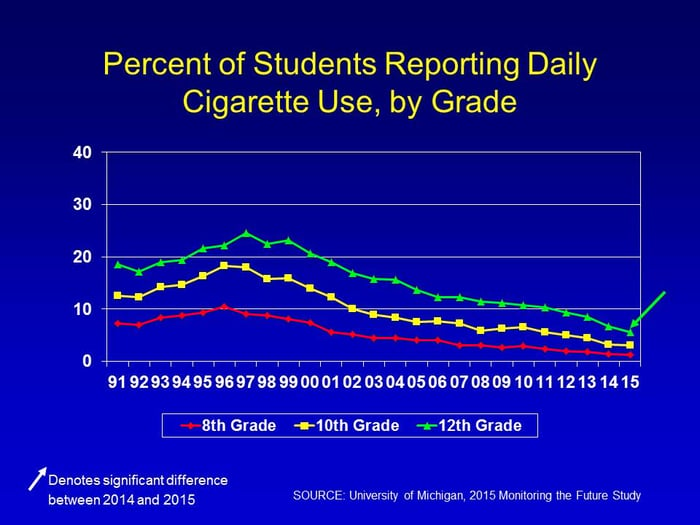 First, the good news: The percentage of students who smoke cigarettes and consume alcohol remains on a steady decline. Daily cigarette smoking is down to just 1.3% among eighth graders, 3% among 10th graders, and 5.5% for high school seniors. Five years ago, the daily smoking rates were 2.9%, 6.6%, and 6.7%, respectively. A similar decline was seen when past-month alcohol use was analyzed in eighth, 10th, and 12th graders.

The bad news from the MTF study? Marijuana use among high school eighth, 10th, and 12th graders remained steady over a five-year period, with 6.5%, 14.8%, and 21.3%, respectively, admitting to smoking marijuana within the past month. A full 6% of high school seniors admit to smoking marijuana daily. Perhaps most surprising, just 31.9% of today's students view occasional marijuana smoking as harmful compared to 78.6% in 1991. 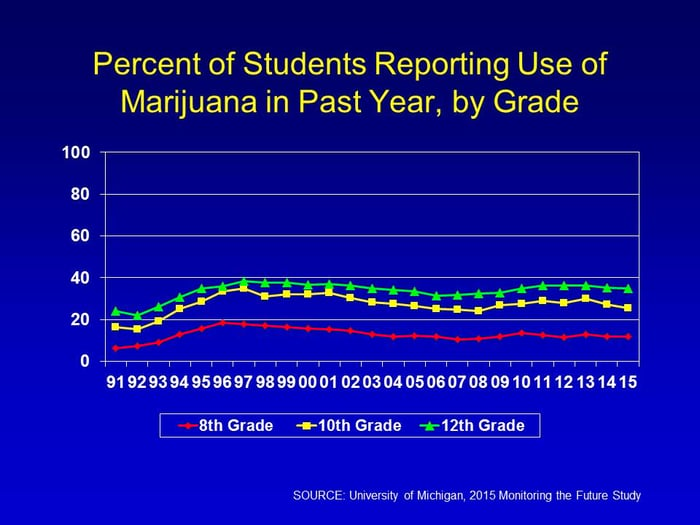 To sum up MTF's findings: High school seniors now smoke marijuana daily more often than they do cigarettes. While cigarettes are a vice of their own with proven adverse lung and cardiovascular effects, the jury on marijuana's safety profile is still out. Even more so, this demonstrates one of regulators' biggest fears: that minors will be able to get their hands on a drug that, even if legalized, would still likely be illegal for anyone to possess under the age of 21.

The other concern here is a previously conducted study from researchers at Northwestern University on adolescent marijuana users. The findings showed that adolescents who began using marijuana daily at age 16 or 17 for a period of three years had an oddly shaped hippocampus, which was accompanied by an average long-term memory test score that was 18% lower than the young adults who'd never used marijuana before.

Safety is an issue that won't easily be resolved
To be clear, the MTF study isn't suggestive that marijuana use is exploding higher despite marijuana being viewed more favorably by adolescents. However, witnessing the use of all vices dropping for adolescents, except for marijuana, has yielded some concerns.

The big issue at hand for regulators on Capitol Hill is whether marijuana can be used safely over the long run. Unfortunately for supporters of marijuana, this isn't a question that's going to be answered with any expediency. Clinical studies involving marijuana predominantly focused on its risks for decades, and only in recent years have we witnessed a discernible shift toward trials analyzing its possible benefits. It could be years, or even more than a decade, before regulators have a balanced safety profile that'll allow them to make a decision on whether to legalize marijuana at the federal level.

Marijuana-based businesses' survival could be at stake

In the meantime, marijuana businesses could struggle to thrive or in some cases even survive. Congress standing pat on its stance of marijuana being a schedule 1 drug means there should be minimal interaction between banks and marijuana-based businesses. Offering lines of credit or even basic banking services, such as a checking account, could be construed as money laundering by the federal government should it choose to reinstate federal law in place of its current "hands-off" approach. Operating a business without access to basic banking services is a growth challenge of epic proportions, and it also creates immense safety concerns since most businesses are forced to deal in cash.

The other issue here is taxation. U.S. tax code 280E prevents businesses involved in the sale of federally illegal drugs from taking deductions on their federal taxes. It means marijuana businesses are paying tax on their gross profit instead of their net profit. The government likely has no issue collecting the extra revenue, but this law is making it even more difficult for marijuana companies to profit and expand.

Ultimately, in spite of its massive market expansion potential, the gray clouds and uncertainty surrounding marijuana make it a very risky investment for the individual investor. Not only are most marijuana stocks traded on over-the-counter exchanges, where reporting standards are often not as rigid as on a major exchange like the NYSE, but they're pretty much all losing money.

On paper, marijuana looks like an intriguing investment opportunity, but if you dig below the surface, there are enough red flags to merit waiting safely on the sidelines.