It wasn't a great year for the retailer, but the groundwork has been laid for a 2016 comeback.

The company saw its stock steadily decline during the year, as fears arose over its ability to compete with online leader Amazon.com (AMZN -0.07%). Amazon has a number of advantages, and those came into play in 2015.

Amazon doesn't have physical stores, which lowers its overhead costs. It also has a well-developed delivery network that allows it to offer two-day shipping free to members of its $99-per-year Prime service and to anyone spending more than $35 on items the site sells directly.

These are powerful advantages, but 2015 may turn out to be the year where Wal-Mart paid the price to not only compete, but also to leverage its advantages to win back market share. Most of the top headlines Wal-Mart generated in the past 12 months stem from its efforts to make a digital transformation, while the one that isn't may prove to be the most important. 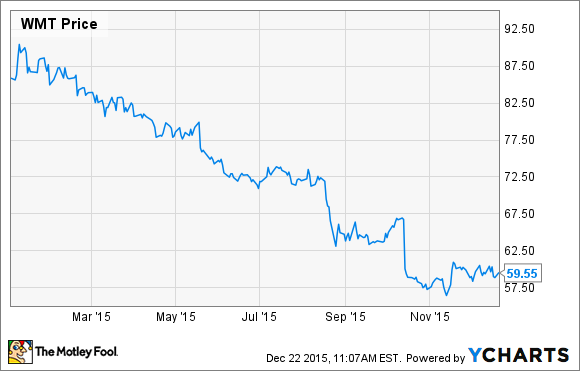 Wal-Mart balances digital and stores
If Wal-Mart hopes to viably compete with Amazon, it needs to leverage the two advantages it has over its digital rival. First, it has stores. This advantage allows the company to sell a product online and allow people to pick it up or return it in a physical location. Second, Wal-Mart also has the advantage that because it has customer physically in front of goods, it can deliver immediate gratification.

The company invested heavily in its digital presence this year, focusing on integrating the online and in-store experience. That appeared to pay off on Black Friday.

"We've said this Black Friday would be the most integrated between Walmart stores and Walmart.com -- and we delivered," Chief Merchandising Officer Steve Bratspies said in a press release. "Tens of millions of customers visited our digital and physical aisles to pick up video games and systems, televisions, movies, and toys, many of the top items sold both on Walmart.com and in stores."

In addition, the shopping holiday saw more people use the Wal-Mart app in-store and before their visits. More than 25 million customers accessed store maps and the circular through the app, according to Bratspies.

That's why Wal-Mart was one of Black Friday's winners, and even though it still falls behind Amazon, these results show that the company has turned an important digital corner, and it bodes well for 2016.

Mobile sales take hold
The big story of the 2015 holiday shopping season has been the surging number of people turning to mobile devices for purchases. Just 12 months ago, Wal-Mart wouldn't have been ready for that, but the company was clearly ready for Cyber Monday this year.

"Mobile firmly established itself as the dominant shopping trend, for both traffic and sales, said Walmart.com CEO Fernando Madeira in a press release. "Mobile is making up more than 70% of traffic to Walmart.com, and now, nearly half of our orders since Thanksgiving have been placed on a mobile device -- that's double compared to last year. Our customers went from previously mostly searching and browsing on mobile, to making purchases at a much higher rate."

And while it's hard to know the exact numbers, you can assume that a decent percentage of the customers buying via mobile from Wal-Mart might otherwise have chosen Amazon. By investing heavily in its digital properties, Wal-Mart is keeping its users from going to its online rival, and it might even be snagging some of Amazon's customers.

Wal-Mart is paying people more
A cynic would say that Wal-Mart is only increasing employee wages because public pressure has forced it to do so. That same cynic would also point to headlines that note that in some cases the company has increased hourly rates but cut hours for some of its workers.

But the non-cynical view would be to celebrate that for whatever reason it chose to do so, Wal-Mart announced significant wage increases for some of its lowest-paid workers. The company pledged in early November to invest $2.7 billion over the rest of 2015 and all of 2016 in higher wages, training, and employee education.

That includes raising its starting hourly salary to $9 and guaranteeing current employees ("associates," in Wal-Mart speak) $10 an hour as of February. The company also pledged to raise the average pay for full-time workers to $13 an hour by April.

That may not be enough to quiet the people calling for a $15 minimum wage, but it's a step forward even if the company's motives and implementation are a bit dubious.

Daniel Kline has no position in any stocks mentioned. He wants one of those $200 lightsabers. The Motley Fool owns shares of and recommends Amazon.com. We Fools may not all hold the same opinions, but we all believe that considering a diverse range of insights makes us better investors. The Motley Fool has a disclosure policy.