The company sends out a series of socially-conscious product announcements in December. Is the PR push sincere, or cynical?

In the month of December, PepsiCo (PEP 0.37%) has pushed through a number of announcements that would seem to indicate the company is pursuing a healthier, more socially conscious consumer. At mid-month, the snack and beverage conglomerate revealed that it would roll out several thousand "Hello Goodness" vending machines, pictured above, in the coming year.

According to Bloomberg news, the digitally enabled machines will stock healthier items from both Pepsico's snack and beverage divisions, including items such as Naked Juice and Sabra hummus cups.

At the "Beverage Digest Future Smarts Conference" held on December 14th in New York City, the company also announced that it would sell an organic version of Gatorade in 2016. It also confirmed the launch of a line of non-GMO labeled Tropicana Juices next year.

As Business Insider reported, PepsiCo Americas Beverages CEO Al Carey said of potential consumers: "I think they're very interested in non-GMO and organic, and to the degree you can make it meaningful to the consumer -- do it."

Is PepsiCo the next natural and organic, non-GMO champion? Hardly, it seems. Below is a chart of the largest lobbying expenditures by organization to defeat mandatory state and federal labeling of products containing GMO ingredients, according to the Environmental Working Group: 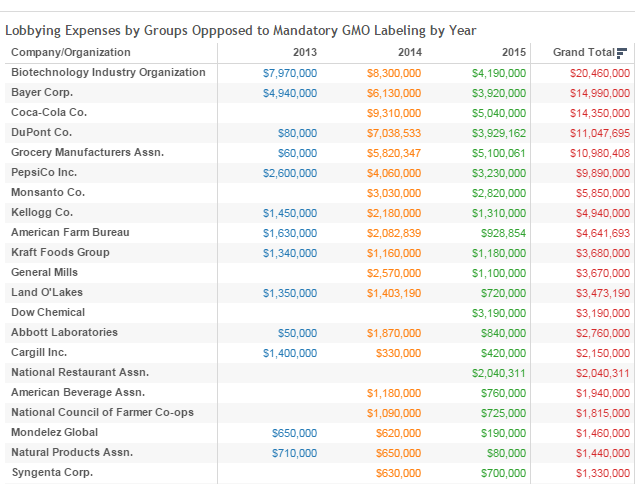 Pepsi, along with fellow beverage Goliath Coca-Cola (KO 0.13%), turns out to be one of the very highest spenders in persuading the government to forego the labeling of GMO ingredients.

Introducing products that seek to tap into consumer demand for non-GMO ingredients, while actively attempting to thwart labeling policy with the brute force of millions of dollars, invites the criticism that Pepsi is greenwashing its image. That is, the company may be cynically donning a guise of social consciousness while profiting from positions its target customers find abhorrent.

If you carry this reasoning further, the economic impact of a few thousand machines selling healthy snack and beverage items to Pepsi is infinitesimal in comparison to the billions the company reaps from sodas and snacks like Doritos, which are often popularly labeled as junk food.

I, for one, quickly reached a jaded conclusion on seeing this series of news items this month. And I question the marketing acumen of Pepsi's newfound, outward embrace of non-GMO ingredients as it fights behind the scenes to squash labeling clarity.

But to flip the coin on this argument for a moment, it's entirely possible Pepsi isn't introducing these products solely to burnish its image. After all, we know Pepsi has earned some green credentials this year by abandoning aspartame in Diet Pepsi, even though this appears to have dented sales of a drink that's vital to the company's revenue growth.

And if you think about it for a moment, at PepsiCo's size, even if it wanted to evolve into a healthier purveyor of foods and beverages, it couldn't do so in a swift pivot. Its current business model is built around yesterday's products, laden with sugar, chemicals, and preservatives. Changing this model will require years of incremental adjustments.

That's why like Coke, PepsiCo has an avid interest in buying smaller natural and organic water, juice, tea, and coffee brands. The company wants to adjust to where the beverage market is headed during the coming decades. Whether Pepsi's executives truly believe this is the right thing to do isn't actually relevant. Over the long term, it seems clear that if Pepsi doesn't anticipate consumer desires, it will lose its ability to grow beyond the rate of inflation, which is a baseline measure of success for any consumer goods company.

On further reflection, it seems apparent to me that PepsiCo must engage in tactical experiments that may be completely antithetical to its current business proposition. The launch of "Hello Goodness" vending machines could turn out to be an initial test run in the longer-term distribution of healthier products for a division like Frito-Lay.

And yet the product launches aimed at customers yearning for non-GMO ingredients still seems misguided, as long as Pepsi's might is thrown into the anti-labeling lobby. It's quite likely that awareness around Pepsi's self-contradictory stance will grow in 2016. For better or for worse, company management has opened up what promises to be a spirited dialogue with customers in 2016.