These banks crushed it in 2015 thanks to strong fundamentals.

Let's start with stock performance
To determine which bank stocks were the best of the best this year, I started with a sample of 63 of the largest bank stocks in the U.S., with data supplied by S&P Capital IQ. Three stocks immediately stood out.

First was First Republic Bank (FRC 0.51%), which saw its stock appreciate 29% year to date as of this writing. First Republic was the top gainer of the banks used in this analysis.

Another standout was New York City-based Signature Bank (SBNY 5.32%), which saw its stock price climb 24%. Signature stock was the seventh in gains among the stocks in this analysis.

Rounding out my top-three picks is the third-top gainer at 28%, Bank United (BKU 2.50%). Based in Miami Lakes, Bank United is the second-largest lender headquartered in Florida. The bank also has offices in New York City from an acquisition completed in 2012 -- but more on that later. 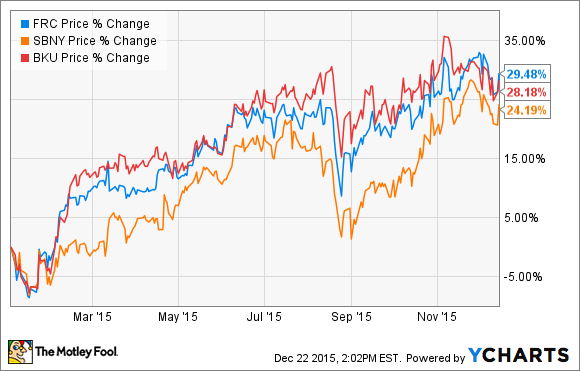 Keeping a stock high means a commitment to asset quality
First Republic is a niche bank focused primarily on making jumbo-sized mortgage loans to wealthy borrowers in a few select markets in the U.S. The bank takes a laser-like focus when selecting locations for its offices, as opposed to the carpet-bomb approach used by the typical regional or national banking franchise.

First Republic's unique approach allows them to target a very wealthy customer base. That, in turn, leads to exceptional credit quality, and a near absence of problem loans. First Republic's ratio of non-performing assets to total assets is fantastic, coming in at just 0.10% for the third quarter.

Non-performing assets are severely past-due loans, plus foreclosures. The average ratio for the 63 banks in this analysis was 0.61%, more than six times higher than First Republic's ratio.

Signature Bank is nearly as impressive, with a ratio of just 0.19%. While First Republic focuses on an exclusive client base in select markets across the country, Signature focuses on just one market, New York City, where it operates just 29 offices. The bank leverages the high concentration of clients in the metro area to operate a very lean business model, with much lower expense ratios than the industry norm. Those lower expenses allow Signature to be more selective in their credit underwriting, lowering the risk of loan defaults without having to chase yields to achieve profits.

Bank United's 0.52% ratio for the third quarter is actually an anomaly for the bank. One of its commercial customers was the victim of fraud, which caused enough financial trouble for that customer to require their entire $44 million loan balance to be moved to non-performing assets. That singular event doubled Bank United's non-performing loans from the second quarter to the third quarter. Based on the bank's history and the circumstances of this increase, I view Bank United as on par with First Republic and Signature Bank in terms of asset quality. I think this spike will be short term, and insignificant for long-term investors.

We're in it for the profits, too
Banks have faced a strong headwinds during the past eight years when it comes to profits: the Federal Reserve's near-zero interest-rate policy. As of now, that policy looks to be coming to an end in 2016, which should give the industry some extra juice to power their income statements going forward. That said, 2015's low rates didn't stop these three banks from churning out some impressive returns.

Fueled by solid loan growth, an efficient operation, and its strong asset quality, First Republic cruised through 2015 with consistent and impressive earnings. Third quarter return on equity was 10.1%, besting the peer group average of 9.3%.

Signature reported enough earnings to drive nearly 14% return on equity, despite seeing its margin between its loan income and interest expense shrink in the third quarter. Again, thanks to the bank's geographic concentration in the densely populated New York City market, it was able to keep profit margins strong, with low overhead.

Bank United beats both First Republic and Signature Bank in the profits department, reporting 18.8% return on equity for the third quarter. Year over year, net revenue rose 17%, and net interest income was up 9%. Even better, the bank also has the best dividend among the three, with a 2.33% yield.

There is one point of concern worth mentioning for Bank United, though. The bank's New York portfolio is approximately 95% comprised of loans secured by taxi medallions, and repaid by cash flow from taxi companies. If competition from Uber or other ride-sharing apps increases to the point of impacting the cash flow of these businesses or the value of the taxi medallions, Bank United could face serious problems in that portfolio. As of now, though, bank management says that the cash flow remains strong to support these loans, and the portfolio is being monitored closely.

What will 2016 bring?
Each of these banks had a tremendous 2015. Stock prices moved from the lower left to the upper right, earnings were strong, and asset quality was among the best of the best. It's hard to imagine a better story for a bank stock.

The year 2016 will bring a whole new set of challenges. The economy will adjust to gradually increasing interest rates. Individuals and businesses will face unforeseen challenges.

Regulations continue to evolve. Anything could happen. For these banks, the foundation of asset quality and strong profitability is a great defense for any possible downturn, and it's also great fuel to keep rocketing higher if no downturn occurs.