Is the failure of this appliances deal a temporary setback or a permanent headache for General Electric?

General Electric (NYSE: GE) announced on Dec. 7 that it was terminating its $3.3 billion agreement to sell its consumer appliances business to Sweden's Electrolux (NASDAQOTH: ELUXY).  The deal would have turned Electrolux into the largest consumer-appliance company in the world. Current market leader Whirlpool (NYSE: WHR) can breathe a sigh of relief. But what does this mean for GE's ongoing quest to shed its non-industrial assets?

The sticking point
The demise of the deal was a direct result of U.S. government objections. In July, the Department of Justice filed an antitrust lawsuit to block the deal. Deputy Assistant Attorney General Leslie C. Overton of the Justice Department's Antitrust Division put it succinctly:

Electrolux's proposed acquisition of General Electric's appliance business would leave millions of Americans vulnerable to price increases for ranges, cooktops, and wall ovens. ... This lawsuit also seeks to prevent a duopoly in the sale of these major cooking appliances to builders and other commercial purchasers, who often pass on price increases to home buyers or renters.

It's hard to argue with the Justice Department's point of view. Whirlpool, GE, and Electrolux own most major U.S. appliance brands:

The government cited the fact that these brands represent more than 90% of the appliances sold to U.S. homebuilders. But that's not all: As of 2013, the last year for which data is available, GE, Whirlpool, and Electrolux's brands represented 52.1% of the total U.S. market for major appliances. The next-largest manufacturer, LG, commanded only a 6.9% share.

Electrolux submitted various settlement proposals to the Department of Justice, but all were rejected. GE pulled the plug on the deal before the case could go to court.

The aftermath
Electrolux is the big loser here. It was hoping to double its U.S. sales through the purchase, a goal that now is all but impossible. Instead, it plans to focus on growing the market share of its existing brands, especially Frigidaire and its namesake Electrolux brand.

There's even insult being added to Electrolux's injury. Even though GE is the one that scuttled the deal, Electrolux will still have to pay GE a $175 million breakup fee. Unsurprisingly, on the news of the breakup, Electrolux's stock plummeted. GE's, on the other hand, remained relatively unchanged: 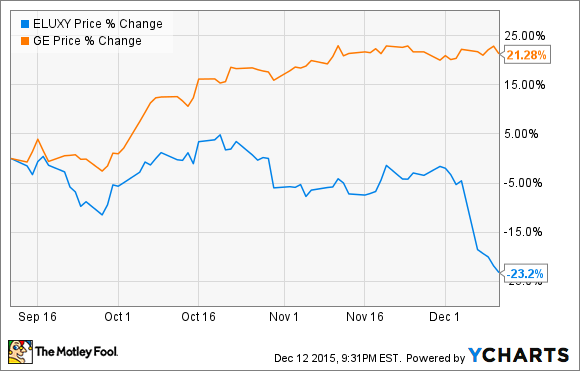 The future
GE still wants to rid itself of the low-margin consumer-appliances unit to focus on its core industrial businesses. But there's another aspect to the deal: it was scheduled to provide nearly 10% of the $35 billion in cash GE has promised to return to shareholders through dividends and buybacks.

General Electric doesn't appear to have another source for the $3.3 billion this sale would have yielded. Instead, it said it would pursue other buyers.

The company didn't specify who exactly those other buyers might be, GE still has "a bunch of people who are ready to kind of step in and pursue this," according to Chairman and CEO Jeff Immelt at a recent shareholder presentation. "There's significant inbound interest," he said. "I expect it to happen relatively quickly."

Aside from Electrolux, it's unclear where a buyer might be found. If regulators weren't willing to approve a GE-Electrolux deal, there's no way they'll get on board with an even larger GE-Whirlpool merger. And since most of GE's appliances are self-branded, selling brands off piecemeal seems an unlikely proposition. Asian manufacturers with a U.S. market presence such as LG, Samsung, and Haier are likewise self-branded. While an acquisition by one of them would be possible, it also seems like a long shot. We'll have to wait and see if one of these so-called "serious, capable global strategics" steps up.

In the meantime, GE will continue to operate its appliances unit, which is not a terrible outcome for shareholders. Although the business has comparatively low margins, it isn't losing money. Revenue is up 8% YTD, and EBITDA is positive. So aside from the loss of the proposed $3.3 billion sale price, there's not tremendous downside for GE -- and it gets a cool $175 million payout. While there isn't any particular financial upside for Whirlpool either, it will continue to benefit through its status as market leader.

The upshot
The thesis for GE-- and Whirlpool, consequently -- remains pretty much unchanged. These new developments shouldn't prompt you to any new action in either stock. For Whirlpool, you'll just want to keep an eye out for holiday sales numbers when they're released in early February. GE seems confident it will sell its Appliances unit in early 2016, and until then, it's not worth worrying about. More important is the progress it's making on its GE Capital asset sales, which represent a much bigger piece of the $35 billion pie it plans to return to shareholders. And that seems to be going full steam ahead.