The 3D-printer maker made several missteps in the past 12 months. Here are the worst of them. 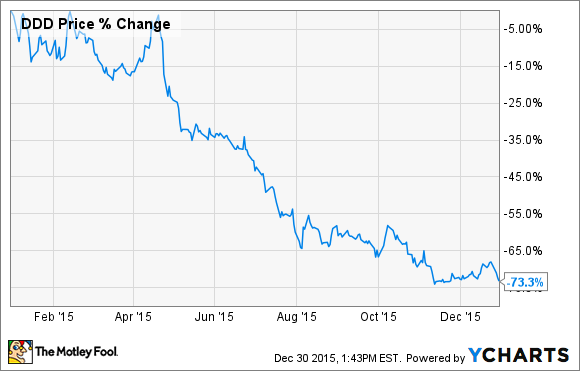 It's been a horrible year for 3D Systems (DDD -2.99%). The stock lost more than two-thirds of its value, its CEO abruptly resigned, it experienced a notable slowdown in customer spending, and it continued to struggle with execution issues caused by its overly aggressive acquisition strategy. Of all the things that went wrong, there were its worst moves in 2015.

1. Being distracted
About four years ago, 3D Systems began a multiyear acquisition spree to build out its portfolio and expand its market opportunity, and it's made about 50 acquisitions since then. At first, the strategy resulted in strong revenue growth, but it has since unraveled as the problems started adding up and weighed on performance. The problems it caused continued mounting in 2015, when the company experienced a host of product quality issues and the business became less efficient.

In particular, 3D Systems' cash conversion cycle, which measures the amount of days it takes cash to run through the entire sales process -- from sitting in the bank, to buying inventory, selling that inventory, and collecting payment -- has been strongly on the rise in 2015, the opposite of what investors want to see. An increasing cash conversion cycle strongly suggests that management hasn't made operational efficiency a top priority. 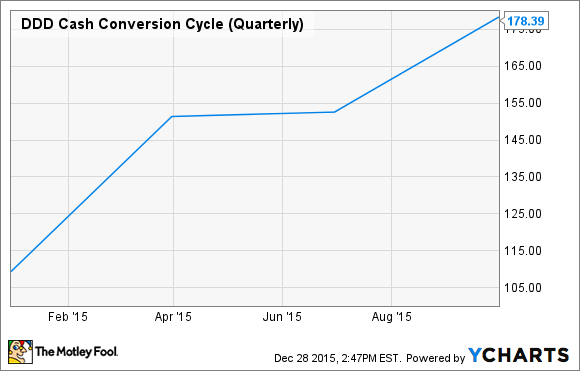 Ideally, investors want to see a company that runs its cash through the sales process as quickly as possible (or at least make improvements) so that it creates more opportunities to reinvest said cash back into the business. For 3D Systems, it's clear that management became too distracted with integrating the numerous acquisitions under the company's umbrella, which came at the expense of its operational efficiency. Digging deeper, the company's return on invested capital, or ROIC, which measures the percentage of net income (less dividends) it generates compared the total capital (equity plus debt) that's been invested into the business, has been in a multiyear decline. This suggests that 3D Systems hasn't exactly been minting profits with its acquisition strategy and there could be greater issues at hand -- like management's ability to allocate capital efficiently. 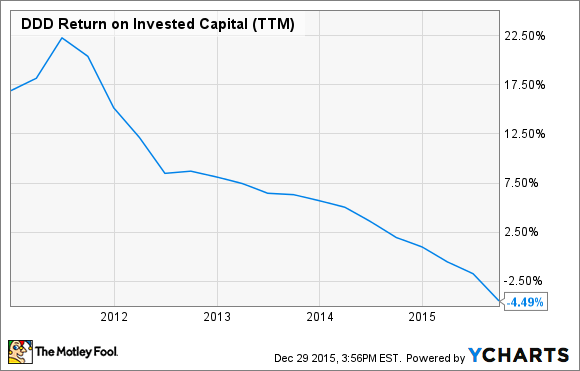 3. Burning through its cash hoard
3D Systems spent nearly 45% of its cash hoard in 2015, closing out the third quarter with about $157.5 million on hand. According to 3D Systems' cash flow statement, it spent $91.8 million on acquisitions during the first nine months of 2015, representing about 72% of its total cash burn. 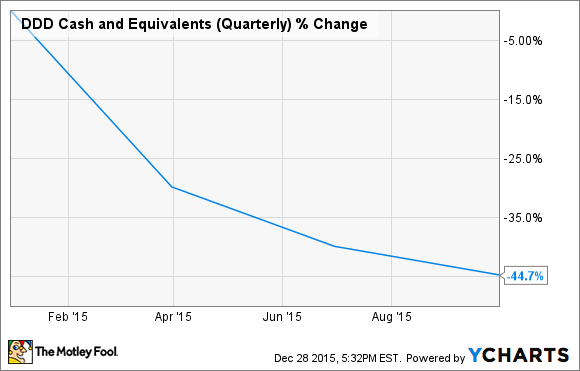 Clearly, this cash burn rate is unsustainable and could be viewed as worrying in light of the competitive environment. After all, the company may need its cash to defend itself against well-funded entrants like HP and Carbon3D, both of which plan to enter the market in 2016 with new technologies that'll likely make parts of 3D Systems' portfolio appear inferior.

To be fair, management remarked on its third-quarter earnings call that 3D Systems is "finished with M&A, as we've known over the last five years," meaning the company's cash burn rate should slow dramatically in the future without acquisitions in the mix. Given the importance of cash and its ability to buy staying power when competition reaches a tipping point, investors will want to see proof that management has slowed down its spending in future periods.

Looking ahead: another tough year ahead?
Between the threat of increased competition and ongoing operational challenges, it may seem like 3D Systems faces more challenges than prospects in 2016. That's not to say management can't overcome these challenges and reassert its leadership in the industry. But it's a tall order and will depend on management showing proof that the actions it's taking to improve its prospects and underlying operations are actually working.

When or if this progress materializes is anyone's guess, and until then, 3D Systems investors may be in for another helping of disappointment.