A recent Deloitte report highlighted a disturbing trend in the pharmaceutical industry: It appears that investments made in research and development just aren't delivering the way they used to.

In 2010 Deloitte began following the top 12 pharmaceutical companies by R&D (or research and development) spending recorded the previous year. This 12-company cohort has since launched 186 products with estimated total revenue of $1.258 trillion, and it has collectively advanced 306 drug candidates with total forecast lifetime revenue of $1.414 trillion into late-stage development.

These figures may seem astonishing, but projected returns on R&D spending for the entire cohort declined to a paltry 4.2% this year from the baseline 10.1% observed the first year.

Peak sales in decline
With the exception of 2014, returns have been lower each year since Deloitte began following the cohort. Many factors are responsible in part, but the single largest driver of the observed trend downward has been a reduction in forecast peak sales. Since 2010 the average peak sales estimate per drug has fallen by 50% to $416 million per year, while development costs per drug have increased be 33%.

One reason for declining peak sales forecasts is increasing difficulty when negotiating for reimbursement with tightly-budgeted end payers. Cohort member GlaxoSmithKline (NYSE:GSK) was recently hit with analysis from the U.S. budget watchdog, the Institute for Clinical and Economic Review. According to the ICER, Glaxo's new severe asthma therapy Nucala is overpriced by 63% or more.

Nucala is approved for a severe form of asthma that affects 5% to 10% of America's 22 million asthmatics, or 1.1 million people at the lower end. If we assume a reasonable (if not conservative) peak market penetration of 20%, at the list price of $32,500 per year, we arrive at a peak sales estimate of about $3.6 billion in the U.S. alone.

If we take into account the ICER's recommendation however, peak sales of the drug fall to somewhere between $1.4 billion and $864 million. Now, one think-tank report isn't about to singlehandedly cut billions in sales off from a drug's potential, but it gives pharmacy-benefit managers ammunition for negotiating hefty discounts and rebates that eat into a drug's profitability.

Raising the bar
If you think U.S. think-tanks are rough, consider the U.K.'s cost watchdog, the National Institute for Health and Care Excellence, or NICE. Don't let its acronym trick you; as immune-oncology pioneer Bristol-Myers Squibb (NYSE:BMY) recently learned, NICE is anything but nice to drugmakers.

The company's latest blockbuster, Opdivo, has been shown to increase advanced lung cancer patients' chances surviving 18 months after treatment to 39% from a baseline of 23% seen in patients given standard chemotherapy, docetaxel. That's the biggest improvement these patients have been offered in over a decade, but it isn't good enough for NICE.

The U.K. watchdog's beef is with the drug's price per quality-adjusted life year gained. In other words, Opdivo, at about $150,000 for a year of treatment, either needs to lower its price, or extend survival even longer to gain NICE's blessing.

Stay focused
While there's not a lot the big drugmakers can do about increasingly austere payers, lower peak estimates aren't the only factors leading to dismal R&D returns. The other side of the equation involves increasing development expense. Since 2010, the average cost of developing a new drug candidate has increased by a third, bringing it to $1.58 billion. 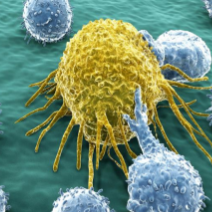 One way to lower overall development costs is by limiting the number of different therapeutic areas under focus. Novartis (NYSE:NVS) took a big step in this direction earlier this year when it swapped its vaccine business for GlaxoSmithKline's oncology assets.

Going into the deal Novartis had a strong presence in this field. Oncology product sales in 2014 reached $11.7 billion, or about 20% of total sales for the year.

Of course, following the swap, cancer therapies have taken an even larger role at Novartis. In the third quarter, oncology unit sales hit $3.5 billion, or 29% of total sales for the period.

It's still too early to tell if lowering its number of targeted therapeutic areas will lead to better returns on R&D spending for Novartis. With a dozen oncology filings scheduled for next year, we should get an idea soon enough. Going forward, investors will want to see if the company is advancing every possible candidate, or limiting spending to programs likely to provide dramatic improvements to existing therapies.

Bring it in
In addition to staying focused, another strategy that seems to be working is looking beyond your own laboratories for innovation. This year's Deloitte report also looked at four unnamed mid- to large-cap companies not included in the 2010 cohort.

It appears that bigger is not better when it comes to achieving outsized returns on R&D. Between 2013 and 2015, the four smaller companies delivered combined R&D returns of 17%, well above the 5% seen in the original cohort during the same period.

A curious feature of the better-performing smaller companies was that they derive a much higher proportion of their late-stage pipeline value from externally sourced assets than the original cohort.

Putting it all together
The report didn't disclose which mid- to large-cap companies it included in its analysis, but I'd be shocked if Gilead Sciences (NASDAQ:GILD) isn't one of them. On its way to becoming the most valuable pharmaceutical asset in history, sofosbuvir -- the active compound that makes up Sovaldi and part of Harvoni -- wasn't discovered by Gilead.

Instead, Gilead used antiviral expertise gained during development of its HIV assets to make a bold decision. At a purchase price of $11 billion, sofosbuvir and the company that began its development, Pharmasset, wasn't cheap -- but it proved to be one of the smartest acquisitions in healthcare history. Consider Gilead's ratio of R&D to revenue, and the company's profit margin: 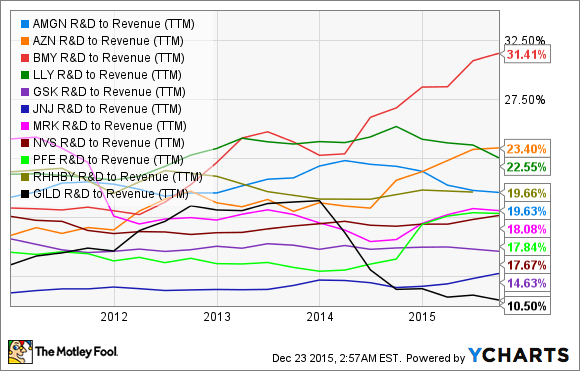 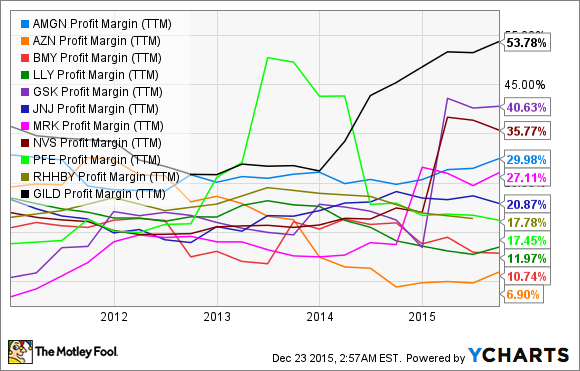 It's clear to see that smart use of external resources catapulted Gilead's profitability beyond that of its peers. The important takeaway is that by staying within its main therapeutic area, Gilead was able to find an undervalued asset, then skillfully unlock its value despite pushback from end payers. As you can see, the company now has what is arguably the industry's most profitable R&D machine.