Carl Icahn seems to be getting his way.

With its stock down 70% over the past year, it's clear that Freeport-McMoRan (FCX -1.26%) has issues that need to be addressed. That being said, the company also has a lot of valuable assets, which is what caught the eye of activist investor Carl Icahn.

Seeing value that he thought was being mismanaged, he took a big stake in the company, becoming its largest shareholder in the process. It's one that has given him a seat at the table to make changes, quite literally because he now controls a couple of board seats. He's making good use of those seats, having pushed the company to make a number of key changes in recent weeks, including what ultimately led to the exit of its co-founder.

After 50 years, Jim Bob steps down
Earlier this week, Freeport-McMoRan announced that co-founder Jim Bob Moffett will step down as chairman and quit the board. He's being replaced by Gerald J. Ford, who will serve as non-executive chairman after serving as lead independent director since 2013. That said, Moffett isn't going very far. He has been appointed chairman emeritus and will serve as a consultant to the board and advise the company on its Indonesia operations, receiving a $1.5 million annual consulting fee.

Moffett has a long history there, having formed the McMoRan Oil & Gas Company in 1969 with two partners. He built it into one of the leading independent oil and gas companies before merging it with the Freeport Minerals Company in 1981. Overall, Moffett spent the past 50 years in the natural resources industry, helping build Freeport-McMoRan into one of the leading global resources companies and the world's second largest copper miner.

One giant misstep
While Moffett created a lot of value over his long and illustrious career, he is in a sense the fall guy for the company's problems over the past year, which are largely being blamed on its ill-timed foray into oil and gas in 2013. While the move to acquire Plains Exploration & Production as well as McMoRan Exploration made sense at the time given Freeport-McMoRan's history in the oil and gas business -- and the importance of oil and gas to fellow global resources giant BHP Billiton (BHP -0.70%)-- it hasn't paid off as expected. The hope was that it was the ticket to join BHP Billiton as an elite global resources company because it would diversify away from mining and copper, in particular. Instead, it saddled it with a lot of debt and limited its financial flexibility.

While the deal came with high hopes, it wasn't without its red flags at the time. First of all, Freeport's debt jumped from $3.5 billion to more than $20 billion following the acquisitions. 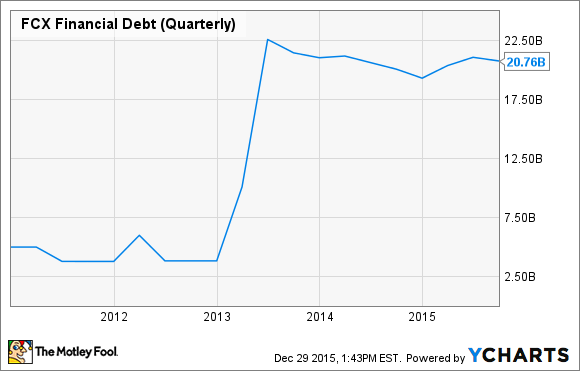 That surge in debt was by design. Freeport-McMoRan wanted to take advantage of low interest rates and because it couldn't find compelling mining projects to invest in it turned to oil and gas. However, it was still a very aggressive move that required commodity prices to remain robust for a couple of years. Unfortunately, that debt become a major weight after oil and gas prices crashed.

The other big red flag at the time of the deal was the fact that Moffett was the largest individual shareholder and the CEO of McMoRan Exploration, so he clearly would benefit from that acquisition. In fact, as the largest shareholder, he personally received a big slug of cash after Freeport-McMoRan paid cash to acquire the company. In a sense, this move was seen by some as a way for him to consolidate his financial interests. It's his direct personal involvement in the deal that was Freeport's undoing that is now driving him out of the chairman's role.

Investor takeaway
Freeport-McMoRan's shift into oil and gas was supposed to turn it into an elite global resources company patterned after BHP Billiton. It's one that might have worked if it hadn't been made right before commodity prices crashed and paid for with an enormous amount of debt.

However, with it now viewed as a management misstep, the man largely responsible for it is being shown the door. It's a tough way for Moffett to end his legacy, but in a world where short-term results are closely monitored and activist investors are in control, Freeport-McMoRan had no choice but to make this change.

Why Shares in Freeport-McMoRan Surged 10% Today
413%