Galapagos has a potential blockbuster in filgotinib, no matter who helps develop it.

It's been a rollercoaster year for Belgium's Galapagos NV (GLPG -1.74%). Although trading on the Euronext exchange since 2010, the company raised an impressive $275 million this May in its U.S. IPO. Those funds will help it develop a surprisingly deep bench of clinical-stage candidates. Although some of those candidates remain fully owned by Galapagos, the company has partners-a-plenty.

One such partner, AbbVie (ABBV -1.01%) had its eyes on potential rheumatoid arthritis pill, filgotinib. In 2012, the company was so impressed by early clinical data that it spent $150 million for an option to license the drug and fund its development pending the outcome of a phase 2 study.

The trial was a success, and most expected AbbVie to exercise its option to license filgotinib, triggering a $200 million payment to Galapagos in the process. Expecting a windfall, the market drove the stock to its all-time high. 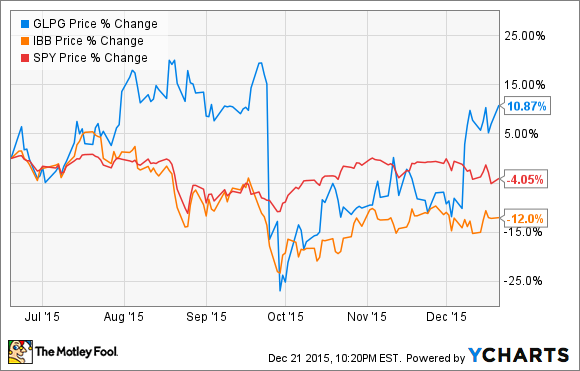 The good times quickly came to an end for Galapagos shareholders in September when AbbVie decided to further development of its own JAK inhibitor, ABT-494, rather than purchase rights to Galapagos' pill. The stock was subsequently hammered, only to soar once more after Gilead Sciences (GILD -0.82%) swooped in with an even better deal for filgotinib.

The $16 billion rheumatoid arthritis market is largely dominated by biologics that require injections, so an effective oral therapy should be well received. Another oral JAK inhibitor, Pfizer's (PFE -1.01%) Xeljanz, has been available in the U.S. since 2012, but a second-line indication and several black box warnings -- the FDA's most severe -- on its label aren't helping sales much. When Pfizer last reported, the drug was selling at an annual run rate of $508 million.

Half-a-billion after a few years is nothing to sneeze at, but Xeljanz sales pale in comparison to injected biologics used to treat rheumatoid arthritis like Humira and Enbrel. After Galapagos' oral JAK inhibitor was passed over by AbbVie, it's surprising to see Gilead put down $300 million for a similar drug, until you look at how well it performed in trials.

Sewing up the second line
An impressive 26% and 25% of rheumatoid arthritis patients that didn't respond to standard first-line treatment, methotrexate, experienced a 70% reduction in disease activity when dosed for 24 weeks with 100 mg or 200 mg of filgotinib, respectively. It looks like filgotinib has Xeljanz beat. When combined with methotrexate, only 11% of patients -- with inadequate response to methotrexate alone -- taking the approved dosage of Pfizer's pill enjoyed the same reduction in disease activity.

Xeljanz and filgotinib weren't tested in a head-to-head trial, so any comparisons made here need to be taken with a grain of salt. Given the wide difference in efficacy, I'd say Galapagos' claim that filgotinib has best-in-class potential holds water.

Best-in-class, or just best?
In fact, filgotinib may even have top-selling biologic treatments beaten. In a study with Humira in rheumatoid arthritis patients exhibiting an inadequate response to methotrexate, 21% experienced a 70% reduction in disease activity.

Again, this wasn't a head-to-head study, so we can't make any concrete conclusions about which is more effective. However, it looks like filgotinib could eventually threaten injected biologics dominating the rheumatoid arthritis market.

Wait there's more
Rheumatoid arthritis is an important indication, but filgotinib is also scoring high marks in Crohn's disease. Earlier this month, the company released results from a phase 2 study in which 48% of patients treated with the experimental drug experienced clinical remission after 10 weeks.

Humira and other biologics enjoy a large share of this roughly $4 billion market as well. However, if orally delivered filgotinib continues to put up numbers like these, that could all change in Gilead's and Galapagos' favor.

Looking ahead
Gilead Sciences isn't prone to dealmaking just for the sake of looking busy. While many were expecting a larger acquisition, this deal could jump-start the company's lackluster anti-inflammatory franchise. Ahead of the deal, this basically consisted of one candidate in phase 2 for irritable bowel disease, GS-5745. Filgotinib isn't about to become another record-breaker like Gilead's mega-blockbuster Harvoni, but if it gets approved approved, reaching annual peak sales estimates of $3 billion will help reduce the company's dependence on sales of antivirals.

It's too early to be sure, but the biggest threat to filgotinib could come from AbbVie's ABT-494. On the day AbbVie announced it would drop Galapagos' JAK inhibitor, AbbVie announced phase 2 results from its own candidate. Rates of disease reduction were similar to those seen in filgotinib studies, although there was a minor issue. Generally, we like to see efficacy measurements rise in step with increasing dosages. Several lower dosage groups in AbbVie's study showed the highest rates of disease reduction in their respective studies.

This kink will probably work itself out in larger trials, but you'll want to keep a close eye on any data ABT-494 throws off in the year ahead. Given the $200 million upfront payment required to license filgotinib, about $1 billion in potential milestone payments, and double-digit royalties on potential sales, the economics surrounding ABT-494 are highly favorable for AbbVie. This means you can't draw conclusions about which JAK inhibitor had better undisclosed data, because AbbVie probably would have gone for its own candidate even if it were somewhat inferior.

Cory Renauer has no position in any stocks mentioned. The Motley Fool owns shares of and recommends Gilead Sciences. We Fools may not all hold the same opinions, but we all believe that considering a diverse range of insights makes us better investors. The Motley Fool has a disclosure policy.