Stratasys Ltd. (NASDAQ:SSYS) had another tough year in 2015, as did fellow larger, diversified 3D printing company 3D Systems (NYSE:DDD) and most of the smaller 3D printing companies. Stratasys' stock has plummeted 67% year to date in 2015, through Dec. 24.

While we can't be sure Desktop Metal will get off the ground (excuse the pun), this investment shows Stratasys' management is on the hunt for ways to give the company a bigger presence in the metal 3D printing space. Stratasys doesn't make 3D printers that can print in metals, and it didn't provide on-demand metal 3D printing services until it acquired Solid Concepts and Harvest Technologies in mid-2014. Prime competitor 3D Systems, however, does make metal 3D printers, thanks to its mid-2013 acquisition of Phenix Systems.

The metals market is the fastest-growing space within the 3D printing industry. Stratasys needs a competitive metal 3D printer offering, as I've long opined, if it wants to remain a leader in the industry. My opinion regarding this issue has more recently strengthened because of the expected introduction in 2016 of compelling polymer 3D printers by deep-pocketed HP and well-funded start-up Carbon3D. Having more of its eggs in the metals basket would make Stratasys less vulnerable to formidable competitors on the polymers side.

Getting the bloat off its balance sheet 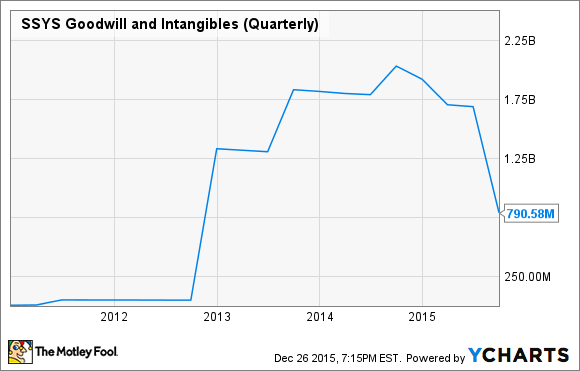 Stratasys got rid of a lot of bloat on its balance sheet this year by taking goodwill impairment charges -- or "writedowns" -- on both its MakerBot unit and its enterprise business. While it's a negative that the bloat was there, as it indicates that Stratasys overpaid for the desktop 3D printer maker and has overvalued its existing businesses, it's a positive that a good amount of it is gone. Investors should now have a better idea as to the true value of Stratasys' business. (Though Stratasys' management said during the last earnings call that the size of the charge could change, as it hadn't yet completed its analysis. It is expected to complete its final analysis later in the fourth quarter.)

More specifically, Stratasys took three goodwill impairment charges for MakerBot totaling in the range of $436 million to $476 million. (We don't know an exact figure because the last writedown also involved the enterprise business and Stratasys just provided a total figure.) This is more than the $403 million Stratasys initially paid for MakerBot in mid-2013. It also took a writedown of $730 million to $770 million on its core enterprise business.

Unlike Stratasys, 3D Systems has not taken any writedowns -- yet. I think it's close to a sure thing that we can expect some big writedowns from 3D Systems soon after a new CEO comes on board.

Holding strong on average selling prices
Stratasys' gross profit margin dropped on a year-over-year basis throughout 2015. CEO David Reis and CFO Erez Simha said during the quarterly conference calls that these drops were not due to falling average selling prices (ASPs). The company attributed the decreases largely to changing product mixes. More specifically, the acquisitions of Solid Concepts and Harvest Technologies in 2014 were a big factor since Stratasys' services operation has lower margins than its products business. Additionally, Stratasys also cited the decline in sales of higher-end Connex printers as a factor.

While I don't think investors should believe everything they hear from any company's management, I do think that it's probably accurate that ASPs are holding steady. Top management has stated such several times throughout the year in emphatic terms, with no hedging. More important, the reasons that Stratasys has provided along with its numbers make sense.

If ASPs are holding up, this indicates that Stratasys' anemic results in its enterprise business have probably been due more to the tough macroeconomic environment than competition, as management has been saying. This should be a positive when the 3D printer overcapacity issue works itself out and companies start more aggressively buying again. The caveat here is that Stratasys will then almost surely be dealing with increased competition from HP, Carbon3D, and others.