Vonage is already on a roll and should continue to rise. Pandora and Tesla took a break in 2015 and are primed for a big bounce in 2016. All three could easily double.

I'm about to list three stocks that I think might double -- or more -- in 2016. All three march under the banner of "growth investing," and have recently proven their mettle. Shares of Vonage Holdings (VG) have soared more than 50% in 2015 and that momentum looks set to continue; Tesla Motors (TSLA 4.67%) and Pandora Media (P) have idled or even dropped this year and look downright undervalued today.

The momentum play
IP-based communications is a strong idea whose time has come. Under new management with an Alphabet/Google pedigree, Vonage is basically winding down its once-popular consumer services and refocusing on the corporate space. CEO Alan Masarek used to run the QuickOffice business that later became Google Sheets, and brought the same business-to-business focus along to his new job at the helm of Vonage.

These days, Vonage is all about business-grade unified communications services. In the recently reported third quarter, business revenues jumped 134% year over year thanks to a plug-in acquisition, or 36% organically. Meanwhile, consumer sales fell by 13% but operating profits held steady in that division.

Overall, the company is getting a deep makeover to serve a deep-pocketed corporate clientele rather than fickle consumers. Lower risk, more visibility, and the potential for stable profitability -- that's good news all around.

As the transformation continues, Vonage shareholders should continue to profit from it. The stock has gained more than 50% in 2015 and could do even better in 2016. Making firm predictions with short time limits is a sucker's game, and my precise numbers might be off.

But barring any serious management errors, it's reasonable to think that Vonage will deliver strong results and shareholder returns over the next few years. Vonage's share prices doubling in 2016 would not surprise me at all.

The idling supercar
Tesla has rewarded long-term stock owners with a 700% return over the last five years. But most of that soaring surge came in 2013, and Tesla shares have only gained 8% in 2015.

This chart should give you a sense of why the stock is stalling: 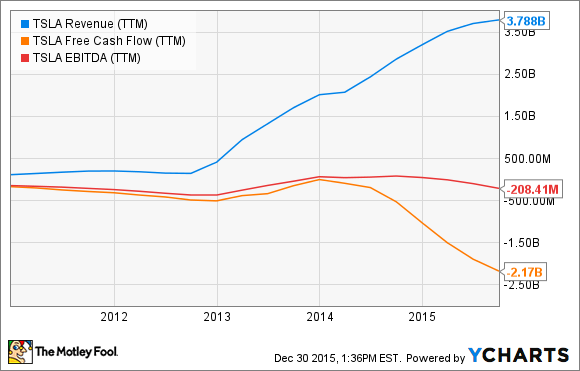 Long story short, Tesla CEO Elon Musk is not trying to deliver big profits in the short term. Instead, he's planning Tesla's future for the long haul, and that big-picture vision actually goes far beyond electric cars. In the very long run, Musk hopes to overhaul the way humans store and consume energy, and then harness that battery-powered future to save this planet and launch colonies on Mars.

I'm not saying that this grand vision will succeed. But I do admire Musk for trying to get there, and I'm looking forward to the smaller victories that must happen on the way. For example, the Gigafactory is large enough to change the economics of rechargeable batteries forever. The output of this Nevada site in 2020 should exceed the 2013 battery production of the entire world. And that's just the first of many planned battery plants, officially known as Gigafactory 1. Musk is singlehandedly changing the economies of battery production and usage, and using Tesla Motors as a reasonable springboard for that process.

That's the long-range opportunity facing Musk and Tesla. For now, Tesla investors can focus on vehicle shipments slated to come in at the high end of earlier estimates while revenue growth leaves the stock chart far behind. I think that Tesla is undervalued today, and there's a good chance that the gap between value and price will close again in 2016.

I heard it on the radio
Finally, shares of Pandora Media fell 22% in 2015. Investors have focused on plentiful competition and low profits, largely ignoring the bigger picture.

For one, the licensing and royalty picture in the U.S. is finally coming together. The faster Pandora can reach a stable and predictable licensing state, the better. In the long run, this business is all about matching expenses and investments to incoming revenues, and that will be much easier once Congress gets its music royalties act together.

The 2016 elections will continue to blur this picture, of course. But by the end of the year, no matter which party walks away from the ballots as the bigger winner, it'll be high time to settle this important issue. It's not just about Pandora, after all, but about the general state of the evolving music industry and the future of American innovation in a larger sense.

Also, Pandora is doing its best to settle the matter all on its own. The company recently struck a deal directly with industry giant Sony, setting royalty payments at a stable level no matter where Congress may decide to put the industrywide baseline. You can bet that Pandora is working up similar deals will all the major music publishers and recording houses, and that the Sony agreement will be presented as a template for others to follow.

And once the American market has congealed, Pandora can go overseas with a vengeance. That's another longer-term business plan, but simply talking about global expansion could be enough to light a fire under the stock in the shorter term.

So Pandora is putting its ducks in a row while the stock is getting punished. 2016 should remove a lot of the risk and uncertainty that is holding Pandora down today. The stock is spring-loaded for a big bounce in 2016.

Suzanne Frey, an executive at Alphabet, is a member of The Motley Fool's board of directors. The Motley Fool owns shares of and recommends Alphabet (A and C shares), Pandora Media, and Tesla Motors. Try any of our Foolish newsletter services free for 30 days.