This past year was a forgettable one for Procter & Gamble (NYSE:PG) shareholders. The stock's 11% drop in 2015 badly trailed the broader market, and the resulting 3.3% dividend yield has qualified the consumer goods titan as one of the Dogs of the Dow for the year ahead.

Yes, a lot went wrong for P&G in the past 12 months. That includes vicious foreign currency swings against the U.S. dollar, emerging market implosions around the globe, and stubbornly weak demand even in rich economies. Those same issues threaten to pinch the business in the year ahead, but there are also a few good reasons to believe shareholders might enjoy a better 2016.

It isn't obvious from a glance at P&G's sinking EPS figures, but the company's profitability is improving -- thanks to huge cost cuts. Management laid out an ambitious goal in 2012 of reducing overhead by 10% over the next five years.

They've trounced that target by cutting non-manufacturing expenses by 23%. P&G now plans to reach a 30% overhead reduction by 2017.

The company has also taken the hatchet to its cost of goods expenses. That line item was down 15% in the most recent quarter. And according to Chief Financial Officer Jon Moeller, P&G has removed $7 billion from that expense category on an annual basis.

Under normal circumstances, these efficiency gains would have powered double-digit profit growth. But foreign currency swings ate up all of the reported earnings improvement. Exchange rate changes are temporary, though, while cost cuts should benefit P&G for years to come.

Simplified business
P&G's brand-shedding initiative is another case of a short-term pain exchanged for a long-term gain. The company has exited dozens of consumer categories in the last two years, including major ones like pet food and batteries. Sales and profit growth have suffered, as these businesses no longer kick in their contributions. But the payoff could be huge.

P&G now competes in just 10 umbrella consumer goods categories, which management has selected for their above-average market strength, profitability, and growth outlook. Diapers are a great example: The company dominates the industry with its Pampers lineup, has extended its lead over rival Kimberly-Clark's (NYSE:KMB) Huggies, and expects market-thumping growth in both emerging and established markets.

Increasing cash returns
Net income plunged by (gulp) 40% in P&G's most recent fiscal year -- thanks to foreign currency moves and those exited business lines. But while that's driven the dividend payout ratio to absurd levels, free cash flow at the same time jumped higher by 15% to reach $11.6 billion. 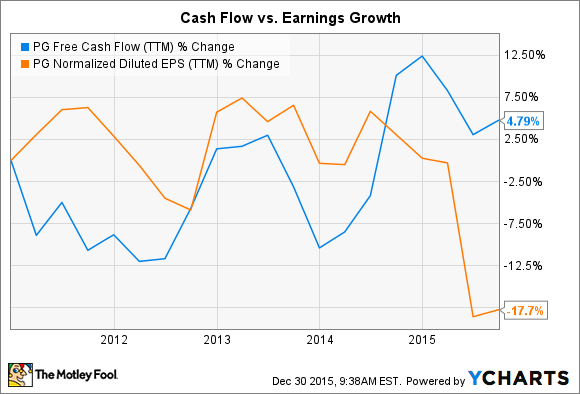 Cash flow is up, even as reported earnings have dropped. PG Free Cash Flow (TTM) data by YCharts.

That improvement explains how the company could continue to afford hefty spending on both dividends and stock repurchases. P&G bought back nearly $5 billion of its shares in fiscal 2015 while sending $7.3 billion to shareholders in dividend payments.

Zoom out, and the picture looks even better for long-term shareholders. The company has returned an average of $12 billion per year to its stock owners over the last five years. And thanks to a healthy, and growing, cash flow, P&G plans to boost that pace to as high as $17 billion over the next four years.