It was a bad week for the markets, but this week's top healthcare ETF still managed to eke out a small gain.

The healthcare space ended 2015 with a bit of a whimper, as many of the exchange-traded funds that focus on the sector were sold off during the last trading week of the year. The S&P 500 had a rough week as well, ending the short trading week lower than it started.

However, one healthcare ETF, the First Trust NYSE ARCA Biotech Index (FBT -0.08%), was more resilient, ending the week with a positive return. 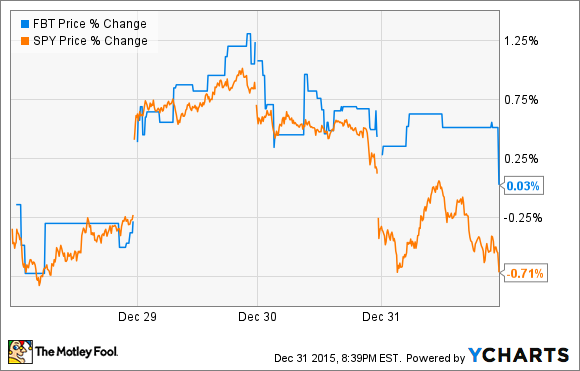 So what's going on inside the First Trust NYSE Arca Biotech Index ETF that allowed it to buck this week's downturn?

Peeking inside
The NYSE Arca Biotech Index invests its capital in a broad base of companies from the biotechnology industry. The fund holds positions in 30 different biotechnology companies of all different sizes, though the median market cap inside the fund is currently hovering around $8 billion.

One unique characteristic of this fund is that it follows an equal-weighted strategy, meaning it initially invests the same amount of capital in all 30 of its holdings and rebalances its holdings quarterly. By following this strategy the fund protects itself from becoming overly concentrated in just a handful of names.

The strategy seems to be working just fine, considering the fund has slammed past the returns of the S&P 500 over the past decade. 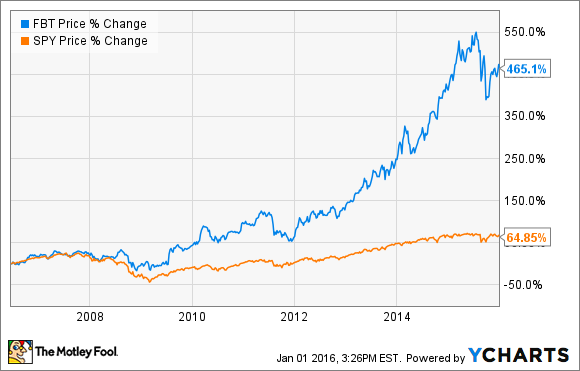 Here's a snapshot of its current top 10 holdings:

What went right this week?
There wasn't a lot of news this week to trigger any strong movements in the fund's top holdings. Still, that didn't stop two of the top holdings, Seattle Genetics (SGEN 1.61%) and Ionis Pharmaceuticals (IONS 0.11%), from moving higher on the week. 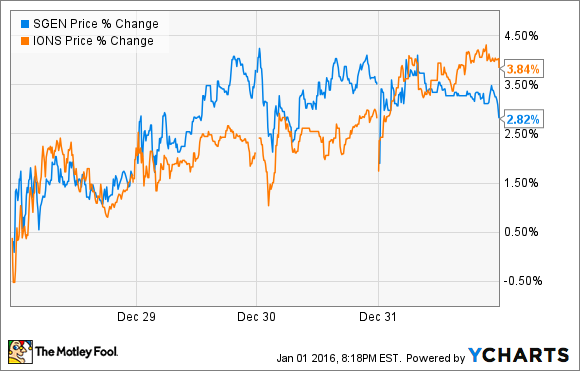 Seattle Genetics' move capped off a tremendous year. This stock popped nearly 40% higher in 2015 as investors continue to be impressed its growth. Revenue from Adcetris, Seattle Genetics' one and only drug, used to treat lymphoma, continues to show strong growth, but it's not yet producing enough to allow the company to show a profit.

That shouldn't worry investors, though, since the company has a number of late-stage trials in process that could continue to expand Adcetris' labelling, which should allow it to continue to grow at a fast pace. The company also boasts a war chest of more than $736 million in cash, so financing the company's research and development efforts isn't a concern.

Ionis Pharmaceuticals is a bit of a different story. For decades, the company was called ISIS Pharmaceuticals, but in light of current events, it began trading under its new name on Dec. 22. As Lynne Parshall, Ionis' chief operating officer, explained it, "We decided to change our company name because, when people see or hear our name, we want them to think about the life-saving medicines we are developing."

The market appears to be applauding the new name. Shares are up more then 7% since the name change officially rolled out.

Is the FBT a good choice?
With its long track record of success, it's clear that this fund has found a winning formula. If you're an investor looking for exposure to the biotechnology sector but you don't want to pick individual stocks, this ETF looks to be a great alternative.

Brian Feroldi has no position in any stocks mentioned. The Motley Fool recommends Celldex Therapeutics, Illumina, Ionis Pharmaceuticals, and Seattle Genetics. Try any of our Foolish newsletter services free for 30 days. We Fools may not all hold the same opinions, but we all believe that considering a diverse range of insights makes us better investors. The Motley Fool has a disclosure policy.