Please ensure Javascript is enabled for purposes of website accessibility
Log In Help Join The Motley Fool
Free Article Join Over 1 Million Premium Members And Get More In-Depth Stock Guidance and Research
By Daniel Miller - Jan 2, 2016 at 8:41AM 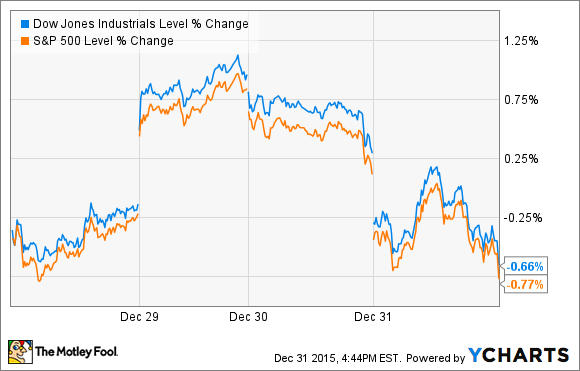 The Dow Jones Industrial Average (^DJI 1.27%) and the S&P 500 (^GSPC 1.73%) treaded water during a short week before the last trading day of 2015, trading 0.66% and 0.77% lower, respectively. But those numbers don't do the volatility justice as markets were up and down with the price of oil this week as the energy sector continued to get hammered.

In other less-than-stellar economic news, The Chicago PMI -- a measure of manufacturing activity in the Midwest -- posted a reading of 42.9 this week, keeping the indicator in contraction territory. The reading was also well below the expectations the measurement would rise to 50.

On the flip side, with a bit of good news, the American consumer remained confident as the Conference Board noted consumer confidence levels rose to 96.5 compared to 92.6 in November.

With all those economic figures out of the way, let's dig into some of the notable stock news for the week.

Pep Boys (NYSE: PBY) popped about 8% on Tuesday before settling down to about a 6% gain for the week after well-known billionaire Carl Icahn won a bidding war for the automotive aftermarket store chain. On Wednesday Bridgestone, a Japanese tire maker, said it would not counter Icahn's most recent bid and that Icahn's firm will pay Bridgestone a nearly $40 million deal-termination fee for Pep Boys ending a pending merger deal with Bridgestone.

To those that follow Icahn's portfolio this isn't out of left field as his firm holds a majority stake in Federal-Mogul Holdings, which is an auto-parts producer, and recently paid roughly $340 million to buy Auto Plus. It was well known Icahn's firm was still shopping around to snatch up additional automotive oriented companies. The deal is valued at $18.50 per share, or a total of about $1 billion, and is expected to close in the first quarter of the New Year.

Weight Watchers International, (WW 2.17%) soared more than 20% at some points during trading on Wednesday after the market got a glimpse of Oprah Winfrey's marketing muscles. The raw brand power of Oprah introducing an advertisement featuring Weight Watchers was enough to send the stock higher immediately as it hit the airwaves.

Looking beyond Weight Watchers' impressive stock price jump this week reveals that the company has been on an absolute tear over the last three months. 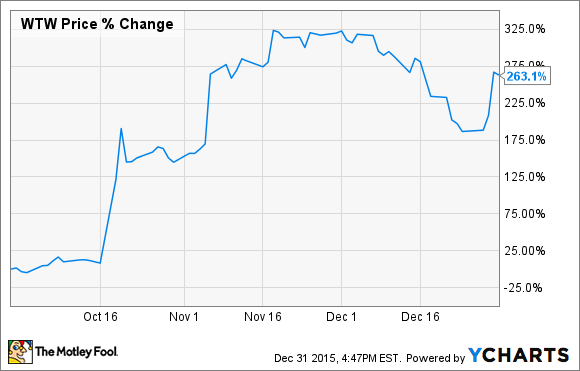 It started in October after Oprah announced she had taken a 10% equity stake in Weight Watchers and was also joining the company's board. Then, Weight Watcher's posted a great third quarter when CEO James Chambers commented on the partnership with Oprah, saying "the response to this partnership announcement has been terrific. The general press has taken a great interest in the news, and we have seen significant improvement in visitors to our website, which has translated into a strong response in the business, albeit during a seasonally low period."

With the short trading week, there wasn't a ton of big news. Looking forward to next week, investors should watch the release of automotive sales in the U.S. market. As gas prices remain cheap and credit remains easily available for consumers, sales of SUVs and full-size trucks have continued to rise during 2015. Because of that, Ford Motor Company (F 2.21%) and cross-town rival General Motors have continued to post near record profits.

Looking at Ford specifically, sales of the highly profitable F-150 are finally hitting full speed, after spending much of the year ramping up production, and they're currently selling at a high price tag – a great mix for Ford and its investors. In November, the average transaction price for the F-Series truck was up a staggering $2,700 year-over-year to $42,800. When sales information hits the news feeds Tuesday, it could signal whether the two largest Detroit autos will end the year with a solid fourth-quarter – and that will likely be the case.

Analysts at TrueCar, project that total new vehicle sales in the U.S. will reach nearly 1.7 million units in December, which would be a nearly 13% increase over last year's December, and would push total annual light vehicle sales to an industry record 17.5 million. The good news is that TrueCar also expects the momentum to continue heading into the New Year, which is welcome news for auto investors.

"This year marks a true milestone for an industry that vigorously rebounded from a recession-led collapse in 2009," said Eric Lyman, TrueCar's vice president of industry insights, in a press release. "Consumers continue to reenter the market in a big way, and we expect 2016 to be even stronger with new vehicle sales topping 18 million units."

Daniel Miller owns shares of Ford, General Motors, and TrueCar. The Motley Fool recommends Ford, General Motors, and TrueCar. Try any of our Foolish newsletter services free for 30 days. We Fools may not all hold the same opinions, but we all believe that considering a diverse range of insights makes us better investors. The Motley Fool has a disclosure policy.