Please ensure Javascript is enabled for purposes of website accessibility
Log In Help Join The Motley Fool
Free Article Join Over 1 Million Premium Members And Get More In-Depth Stock Guidance and Research
By Daniel B. Kline - Jan 2, 2016 at 6:54AM

The cable and broadband giant has one policy in particular which its subscribers take major issue with.

Despite pledging to overhaul its customer service operations and beginning to hire 5,500 new employees to help with the effort, Comcast (CMCSA 1.18%) still has a problem with public perception.

The company is not well-liked by its subscribers and ranks at or near the bottom in the annual American Consumer Satisfaction Index in both Internet and cable service. Its executives say all the right things when it comes to making improvements, but in some ways they're putting a Band-Aid on a gunshot wound.

"This transformation is about shifting our mind-set to be completely focused on the customer. It's about respecting their time, being more proactive, doing what's right, and never being satisfied with good enough," said CEO Neil Smit in a press release. "We're on a mission and everyone is committed to making this happen."

That sounds nice, but it only addresses a piece of what's wrong with Comcast. Yes, customer service is a big issue and treating people better is a nice step, but it does nothing to correct the fact that the company has one major policy which people seem to truly abhor. 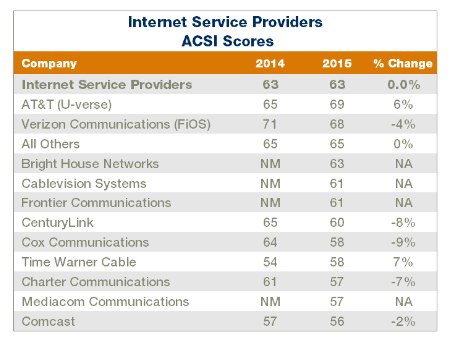 What is Comcast doing wrong?
Unlike the rest of the major broadband providers including Time Warner Cable (NYSE: TWC), AT&T (T 1.84%), and Verizon (VZ -2.17%) Comcast has broadly enforced data caps. The cable and Internet giant has been testing a 300GB data cap in some of its markets. When consumers use more than that number they pay $10 per extra 50G or they can elect to pay an extra $30 each month for unlimited data.

The problem is that most customers have no idea that have a data limit until they exceed it and hit an overage fee. This is partly, perhaps mostly, responsible for the company receiving more complains to the Federal Communications Commission than TWC, AT&T, and Verizon combined, according to data obtained by ARS Technica after it filed a Freedom of Information Act Request.

That gives Comcast's three rivals 6,724 complaints for the period -- almost half as many -- and while it's not the only issue people are complaining about, data caps appear to be the key difference.

The "300GB data cap that Comcast is placing on households is ridiculous and they know it," one Acworth, Georgia, resident wrote to the FCC, ARS reported. "I haven't gone a single week without going over the limit and I need the bandwidth for my job as a video editor."

It's not only that Comcast has data caps, it's that people are often not aware of them until after the fact. Many of the complaints (and you can see them all here) take issue with billing. In fact, over 7,000 complaints dealt with billing issues and many of those related to the data caps.

This one, which the FCC did not provide a name with, but did identify as coming from someone in Nashville, is fairly typical of the thousands filed on the data caps.

Comcast just surprised me with a bill that shows that I owed $180 for over cap surcharges. I called the same day I got the bill, and they also let me know that I owe another $220 for over cap surcharges. (That's right, a surprise $400). All I have been doing for the most part is watching Netflix, so it appears there was some kind of data problem going on that I was entirely [un]aware of."

The big issue, or at least one of the big issues, appears to be that Comcast did not always have data caps. A number of its users signed up for service which was not capped, or where no cap was enforced, only to have the change made.

Comcast responds
The largest cable and Internet provider in the United State sent ARS a response which showed that the company still does not understand how to treat people. It acknowledged that it was using data caps in part of the country involving only a small percentage of its users.

"We designed the various plans we are trialing with a minimum 300GB/month data plan because more than 90% of our customers use less data than that and are not affected," the statement said. "The trials are providing us with invaluable consumer feedback. For example, we surveyed our heavy data users and 80% thought our data trials were fairer than our past approach, which was a 250GB/month static cap."

What it did not note is that in most case that previous 250GB cap was on paper only. It was not enforced.

Comcast also pointed out that 10% of its customers are using nearly 50% of all the data running over its network.

"As a result, these trials are based on the principle that those who use more, pay more and those who use less, pay less," the statement concluded.

The company just doesn't get it
The problem is not that Comcast wants to limit the biggest data hogs on its network. The problem is that it's not just doing that, it's also adding overage charges to regular customers who are not abusing its service and it's doing so without warning.

Some of what the company said in its statement is actually even more damning. Comcast has nearly twice the complaints as Time Warner Cable, AT&T, and Verizon put together and it's only using caps on "a small percentage" of its customers. It's hard to imagine how inundated the FCC would be with complaints if the trial gets rolled out nationwide.

This is Comcast being Comcast and showing that while it might be trying to clean up its customer service act, it's not actually interested in treating people well. Data caps, at least as they are being used here, are not about fairness, they are about padding bills.

Until the company either changes this policy or gets a whole lot more transparent, it's unlikely people will stop complaining.