Please ensure Javascript is enabled for purposes of website accessibility
Log In Help Join The Motley Fool
Free Article Join Over 1 Million Premium Members And Get More In-Depth Stock Guidance and Research
By Cory Renauer - Jan 3, 2016 at 11:17AM 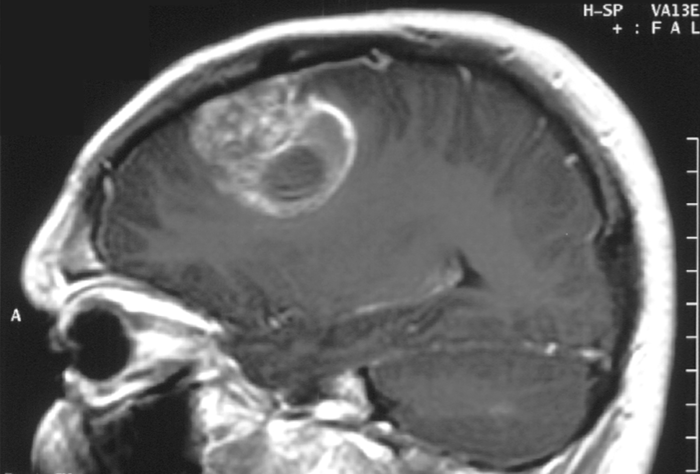 Agenus (AGEN 4.30%) is a tiny biotech with very little revenue to speak of, but its brain cancer vaccine is getting lots of attention from big financial firms. The company now has positive ratings from five firms with corresponding price targets that suggest the the stock is extremely underappreciated.

Let's look at what's brewing in the test tubes of this Massachusetts company to see why some analysts think it's worth a lot more than the stock price suggests.

Punching above its weight
Agenus has a relatively robust pipeline, considering its market cap of around $400 million. While most biotechs this size would circle their wagons around a single program, Agenus has three separate platform technologies at its disposal: cancer vaccines, vaccine adjuvants, and a checkpoint antibody platform. To top it all off, the company recently purchased a facility to churn out its own checkpoint modulator antibodies.

Furthest along in the regulatory process is the company's QS-21 Stimulon Adjuvant program. This is a tree bark-derived compound licensed to GlaxoSmithKline (GSK -4.32%) to help its malaria and shingles vaccines produce a more effective immune response. In return Agenus receives single-digit royalties on net sales of the vaccines for seven to 10 years.

Glaxo's malaria vaccine, Mosquirix, performed well in clinical studies, and results from two separate phase 3 trials provided a ringing endorsement for the adjuvant. In one study, administration of the the vaccine with the adjuvant lowered the risk of clinical and severe malaria by 56% and 47% respectively. In a trial without the adjuvant, Mosquirix lowered the risk by just one-third.

This summer, Mosquirix received a positive opinion from the European regulatory committee that makes such recommendations. The European Commission doesn't necessarily need to follow the committee's opinion, but it likely will, and Agenus will probably begin receiving royalty checks from Glaxo in the first half of the new year. 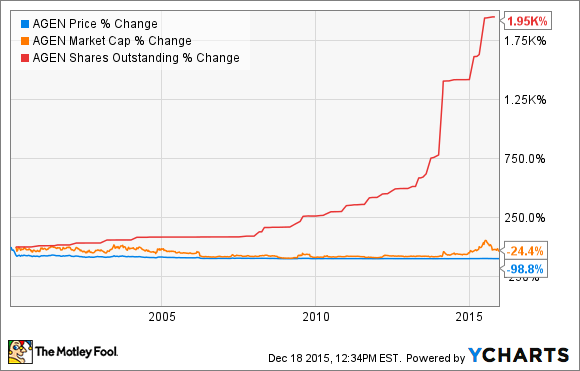 Agenus has already capitalized the potential royalty stream from Glaxo by selling a portion of them to an investor group for a net gain of about $78 million, noting that it's determined not to dilute shares further. This will be of little consolation to investors who have been holding on since the company's IPO in 2000 (note the 98.8% decline in share price, pictured above), when it was called Antigenics.

A cancer vaccine, just for you
Although not yet reviewed by regulators, Glaxo's shingles vaccine also performed well. Combined royalties from both programs could give Agenus the capital it needs to advance its wholly owned Prophage vaccine program in brain cancer. This is a unique process that involves extracting proteins from a patient's tumor, which involves brain surgery. The proteins are shocked with high temperatures to create an individualized vaccine.

Multiforme glioblastoma is one of the deadliest malignancies around. Left untreated, patients uniformly die within three months. Even with the best available treatments, about half don't last a year, and the two-year survival rate is a dismal 25%.

Roughly 10,000 Americans are diagnosed with these aggressive brain tumors each year. Luckily, results from an open-label phase 2 trial suggest Agenus' fully owned Prophage treatment can greatly improve chances of long-term survival. Last summer, Agenus announced that 50% of the 46 newly diagnosed glioblastoma multiforme patients given Prophage along with radiation and chemotherapy were still alive after two years.

Basically doubling patients' chances of surviving two years is incredible, but it gets better. This summer, Agenus split these patients into two groups based on how much PD-L1 is on the surface of their white blood cells. This is an immune checkpoint receptor that tumors exploit to hide from the immune system. It was 27 months before half of the patients in the lower PD-L1 group experienced a worsening of the disease. It was 44.7 months before half these patients died, and six made it past 38 months. A vast improvement over standard of care in the higher PD-L1 group was also observed, but it was hardly as pronounced.

What to look for
It's important to note this was an open label, single-arm study, meaning that the results we've seen can only be compared to historical data. The results seen in the low PD-L1 group should be more than enough to begin a larger, placebo-controlled pivotal trial.

With such a small, uncontrolled study, increased efficacy observed in the group of 17 patients with low PD-L1 expression might be a fluke. Investors will need to brace themselves for the small but real possibility it won't be repeated in a larger study.

There's a lot that can still go wrong. Because Prophage has such an unusual administration route that involves brain surgery, individualized vaccine manufacturing, then reintroduction, a successful launch is hardly guaranteed -- even if it's approved.

That's the bad news. The good news is that Prophage looks like a perfect fit for combination studies with cancer immunotherapies that prevent tumors from exploiting PD-L1 checkpoints. Approved anti-PD1 therapies such as Bristol-Myers Squibb's Opdivo or Merck's Keytruda just might allow patients with higher PD-L1 expression to benefit in a similar manner to those with lower PD-L1 expression.

With a $380 million market cap, Agenus has plenty of room for upside. The QS-21 adjuvant won't take the company to Profit Town, but those royalties, if it's approved and successfully commercialized by Glaxo, will help it get there without raising equity again. Further ahead, a recently acquired stable of immune checkpoint-modulating antibodies, and a library of tumor surface targets gives the company plenty to work with if it succeeds, or a backup plan if it doesn't.