Please ensure Javascript is enabled for purposes of website accessibility
Log In Help Join The Motley Fool
Free Article Join Over 1 Million Premium Members And Get More In-Depth Stock Guidance and Research
By Andrew Tonner - Jan 3, 2016 at 10:30AM

After a year for the record books, Amazon shares are downright expensive. However, thanks to the explosive potential of its AWS cloud business, Amazon still offers plenty of upside for patient long-term investors.

To say that 2015 was a banner year for Amazon.com (AMZN 2.07%) and its investors would be an understatement in the extreme.

Far beyond the effectively flat returns from major market indexes like the S&P 500, Amazon enjoyed a year for the record books in 2015, handily outperforming both the market and any relevant peers. 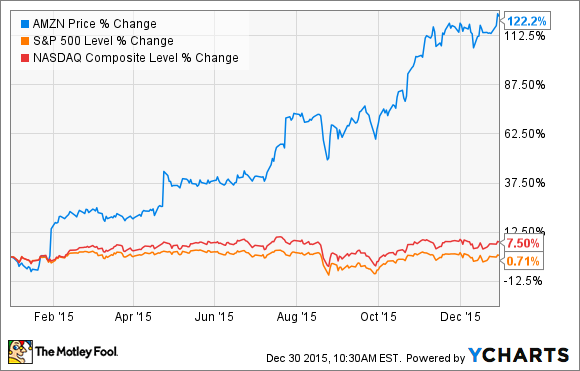 For those of us who called Amazon a must-buy heading into this year, absolutely nailing Amazon serves as a celebratory moment in the seemingly constant discussion of the company's present investment outlook.

Unfortunately for those considering Amazon now, the massive increase in its valuation creates a far more complex investment decision today. However, as one recent analyst noted, the long-term boom in Amazon's cloud business could help make this pricey stock at least slightly more palatable for investors looking to add it to their portfolio.

What's more, Sanderson argues that Amazon Web Services, or AWS, alone could generate as much as $38 billion in revenue by 2020 with the cloud computing division's operating margins expanding from 25% today to 35% by 2020. With Amazon AWS' current revenue run rate at roughly $8 billion, Sanderson's purported 30% average annual growth rate is exactly the kind of figure that makes growth investors salivate, especially when said revenue stream produces a 35% operating margin.

This sounds great, and I largely agree with this train of thought. However, projecting 2020 operating profits in excess of $13.3 billion provides little in the way of actionable intelligence to investors today for a few reasons. First, as a more general proposition, the natural difficulty in predicting the future makes using such long-dated profitability metrics tenuous at best in terms of driving actionable insight today. Though Amazon's cloud computing business appears poised to thrive in coming years for structural reasons, so much can change between today and 2020. Investors should view these lofty figures with a sizable grain of salt (or discount rate depending on their preferred method of skepticism).

Second, while operating profit can serve as a useful benchmark for a segment's core profitability, it also excludes several inevitable costs like interest payments and taxes, which will also decrease the actual amount of AWS profits available to Amazon shareholders. As such, investors should be aware that the actual residual profits reserved for equity investors will likely be somewhat lower than the above $13.3 billion figure when 2020 rolls around. So while perhaps less useful than it might first appear, Sanderson's analysis points to the compelling, albeit expensive, opportunity afforded to long-term Amazon investors.

Hurry up and wait
Despite its unpalatable trading multiples, Amazon still offers a compelling investing opportunity for those willing to hold its shares over the long term for the simple reason that it sits smack dab at the epicenter of two of tech's most sizable generational growth markets in tech today.

Investors living in developed markets, especially the U.S., tend to think of e-commerce as a well-defined category today and rightfully so. After all, Amazon itself is over 20 years old. However, e-commerce as a form of retail is in its relative infancy. I constantly use this chart in making the case for Amazon's long-term growth potential because it so rarely gets discussed, but few investors today probably realize that total e-commerce sales represent only 7.4% of total U.S. retail sales per Commerce Department data.

Hopefully, we can all agree this trend is likely to extend in the coming years as Amazon's supply chain becomes more sophisticated in its ability to bring different kinds of goods to our doorsteps. Crucially as well, the relatively small 7.4% figure above applies to a relatively "mature" market in the U.S. If you consider the overall global opportunity facing Amazon, the long-run potential of its e-commerce business, even after 20 years, remains downright mouthwatering. And considering the AWS analogy above, investors should view cloud computing, and Amazon's leadership in it, as a similarly massive long-term growth opportunity for the company and its investors.

In discounted cash flow analysis scenario, a huge proportion of Amazon's present value lies well out into the future -- say, a decade or more from today. This is what makes investing in growth stocks, and Amazon in particular, frustrating and fraught with risk. However, considering Amazon's well-defined leadership position in each of the two growth markets described above, those patient enough to invest in it -- meaning buy and hold for an extended time horizon -- stand a strong chance of still realizing meaningful returns in the years to come.

Andrew Tonner has no position in any stocks mentioned. The Motley Fool owns shares of and recommends Amazon.com. Try any of our Foolish newsletter services free for 30 days. We Fools may not all hold the same opinions, but we all believe that considering a diverse range of insights makes us better investors. The Motley Fool has a disclosure policy.