Looking to buy an exchange-traded fund heading into 2016? Our contributors think you should give these three ETFs a look.

We Fools are big believers in diversification, as having all yours egg in one basket is a recipe for disaster. One easy way to broaden your portfolio's diversity is to buy into an exchange-traded funds, or ETF, as they typically hold dozens or even thousands of different individual stocks, giving their investors instant diversification. But with thousands of ETFs on the market, which one is the best choice heading into the new year?

We reached out to our team of Motley Fool contributors and asked them to share an ETF that they think is a great buy heading into 2016. Read below to see which ETFs they singled out.

Andres Cardenal: One of the most important economic themes in 2015 is that the Federal Reserve finally decided to increase interest rates for the first time since 2006. This is telling us that the Fed believes the economy is strong enough to continue growing in the context of rising interest rates, and the consumer-discretionary sector could be the right place to invest in this kind of scenario.

If the economy is gaining momentum and the job market remains healthy, then consumers will have more money to spend in all kinds of products and services. In addition, gasoline prices have been falling from a cliff lately, and this means more discretionary money in consumers' pockets.

Consumer Discretionary Select Sector SPDR ETF (XLY 0.06%) is an ETF providing broad exposure to almost 90 companies in the consumer-discretionary sector. This includes businesses such as restaurants, media, automobile manufacturers, retail, and luxury goods, among several others.

The portfolio includes many of the most popular and successful brands around in the world, including household names such as Disney, Starbucks, Nike, and Netflix, to name just a few relevant examples. Importantly, Consumer Discretionary Select Sector SPDR ETF has a conveniently low expense ratio of 0.15%.

Brian Feroldi: Emerging markets have had a rough couple of years as the combination of a strengthening U.S. dollar mixed with the collapse in commodity prices has caused them to dramatically underperform, especially when compared to the U.S. markets.
A quick glance at a five-year chart that compares to the returns of the S&P 500 to an emerging market ETF like the Vanguard FTSE Emerging Markets ETF (VWO -0.36%) is telling. 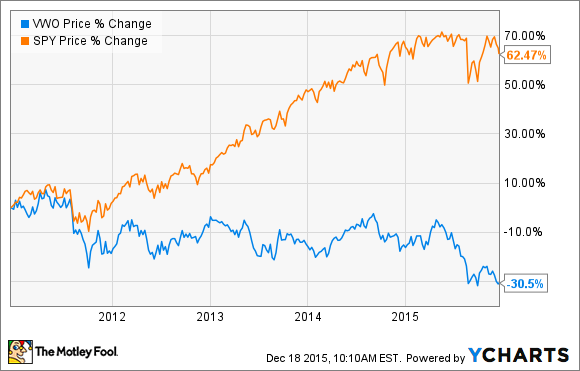 While that extreme difference in performance might scare most investors away, I think it represents a fantastic buying opportunity, as this ETF is a great way to play the eventual rise of the global middle class. Thats why I think the Vanguard FTSE Emerging Markets ETF could be a stellar performer in the years ahead.

This ETF invests in emerging markets all over the world, but a sizable chunk of its assets are invested in China, Brazil, Taiwan, and South Africa. That may sounds scary, but a look at the combined fundamentals of all the stocks in this ETF are quite compelling. Earnings are growing at 13% per year, with returns on equity well above 18%, yet this ETF trades at a trailing price to earnings ratio just below 16. Thats a compelling earnings multiple when compared to its strong earnings growth rate, and this fund offers up a dividend yield north of 3%, too.

Like all Vanguard products, this ETF is dirt-cheap to own as its expense ratio is only 0.15%, and its turnover ratio of 7% makes it tax-friendly.

It's impossible to know when emerging markets will fall back in favor with investors, but once they do, I think this ETF could become a big winner.

Jason Hall: With interest rates finally on the rise, it may seem counter-intuitive to even consider a real-estate-focused ETF, but the Vanguard REIT Index Fund (VNQ 0.64%) looks like a great ETF to buy in 2016 and hold for the long term. But let's start with the interest rate elephant, and why it's not really a major risk for this REIT index fund.

There is a class of REITs -- which stands for real estate investment trust -- that invest in mortgages and mortgage-backed securities. Many of these so-called mREITs could struggle in a rising interest rate environment as short-term rates rise, squeezing the spread between those long-term mortgage rates.

The Vanguard REIT Index fund, based on the MSCI US REIT Index, doesn't invest in any mREITs, so rate spread risk isn't a serious concern. To the contrary -- and as Andres pointed out in his pick -- the rising interest rate environment we are entering into is only happening because of the underlying strength of the American economy. And real estate is a significantly important part of that strength, whether its residential, commercial, retail, industrial, or more specific to a particular industry, like healthcare facilities or data centers for high-tech, for example.

Since near the bottom in March 2009, the Vanguard REIT Index Fund has simply obliterated the market: 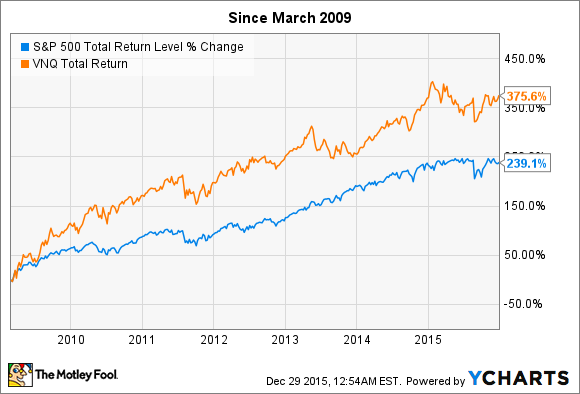 I'm not counting on another half-decade of that kind of outperformance, but the real estate market is still recovering and strengthening, and I think this ETF is likely to continue to outperform the S&P 500 in 2016 and beyond.

How to Invest in Emerging Markets