Please ensure Javascript is enabled for purposes of website accessibility
Log In Help Join The Motley Fool
Free Article Join Over 1 Million Premium Members And Get More In-Depth Stock Guidance and Research
By Reuben Gregg Brewer - Jan 4, 2016 at 10:15AM

Alcoa announced the change of a lifetime in 2015, and 2016 is when it'll finally happen.

Alcoa (AA) is heading into 2016 with a big to-do list. No ... It's more like a massive, complicated, and time-sensitive list that investors around the world will be watching to make sure everything gets done and gets done well. No pressure. But if Alcoa can pull it off without a hitch, 2016 could be the company's best year yet.

Making a list
In late September Alcoa announced that it had reached a vital turning point. After years of building up its so-called value-add business and streamlining and strengthening its upstream business, the two were ready to live life as stand-alone companies. Alcoa, after over 100 years, is cleaving itself in two.

That's huge news and really is the logical conclusion of the process started by CEO Klaus Kleinfeld when he came aboard in 2007. You can argue for and against the break up, but there's one very clear takeaway: Less than a decade after assuming the helm of this venerable aluminum giant, Kleinfeld is going to leave an undeniable and long-lasting mark on Alcoa.

But Kleinfeld's legacy will only stand the test of time if he can pull the split off without a hitch.

Breaking up is hard to do
There are a lot of moving parts here. And there are a lot of connections between the two companies that have to be sorted out. For example, with upstream and value-add under one umbrella, Alcoa is a vertically integrated company. Basically, upstream makes the materials (aluminum) that value-add uses to make things like high-tech jet engine parts.

So, this split up won't be a walk in the park. If things go wrong, it would turn 2016 into a disastrous year for the two companies. 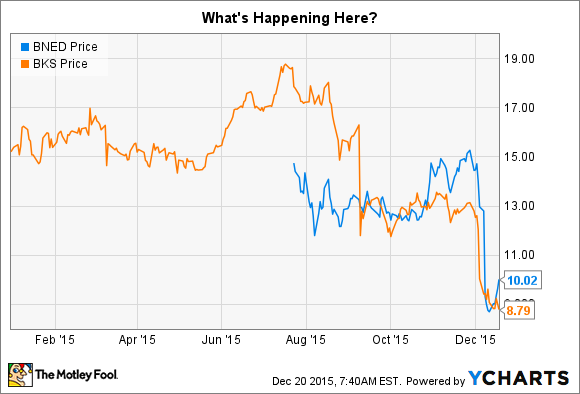 Could things change for Barnes & Noble and its spin-off? Sure. But right now 2015 looks like a bad year and the spin-off is the icing on the cake. So Alcoa, working through a difficult commodities market and getting set to spin off the fastest growing part of its business, is taking on some big risks as it approaches the 2016 divorce date. 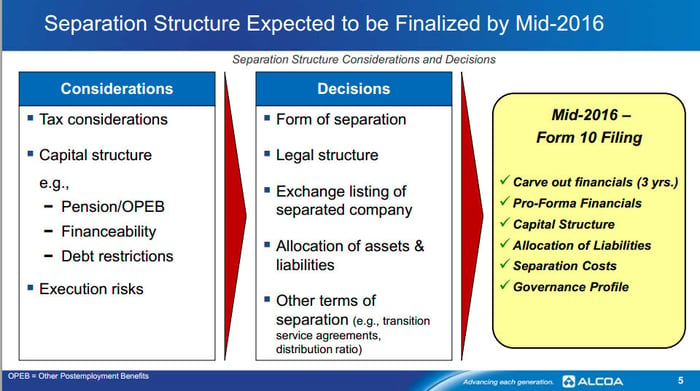 A clean split
But here's the thing: If Alcoa can make a clean split and the two new companies prove capable of standing strongly on their own, 2016 could be Alcoa's best year ever. That's because it will have executed well on a tough job and in a tough environment. Better yet, shareholders will now have the chance to pick which company they want to own.

For growth-minded investors, the value-add business will likely be the choice. For income investors, and perhaps those with a contrarian bent, upstream will likely be more appealing. Right now, you get the whole thing with many industry watchers suggesting that upstream is hiding the value in the growing value-add segment.

In the end, however, it's going to come down to numbers. If either company falls short of Wall Street expectations, Alcoa's 2016 will be a mixed bag at best. So this company has a lot on the line in 2016. If it all goes well, next year could prove to be one of the best, if not the best, of the company's long history. To find out, however, you'll have to keep a close eye on the progress Alcoa makes before and after the break-up.

Reuben Brewer has no position in any stocks mentioned. The Motley Fool owns shares of Barnes & Noble and Barnes & Noble Education. Try any of our Foolish newsletter services free for 30 days. We Fools may not all hold the same opinions, but we all believe that considering a diverse range of insights makes us better investors. The Motley Fool has a disclosure policy.