In 2015, the 3D printing sector grappled with execution issues, a slowdown in customer spending, and the threat of increasing competition. It was the second year in a row that nearly every 3D printing stocks finished lower. Shares of 3D Systems (NYSE:DDD) and Stratasys (NASDAQ:SSYS) have had a particularly hard time since the start of 2014: 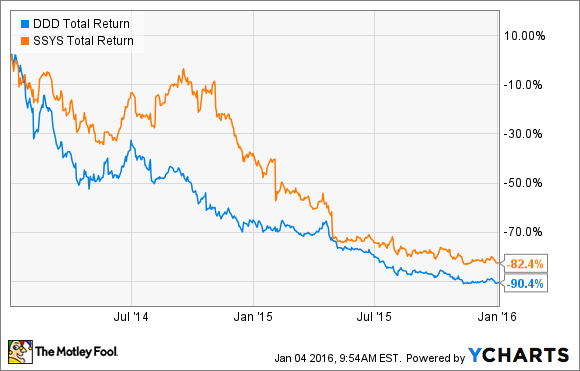 Now that 2015 is officially history, it's time look ahead at 2016 and what it could mean for the 3D printing sector at large. Here are three stats everyone should know.

Investors can use these figures to estimate what Wohlers expects the 3D printing industry will generate in 2016. It's about $7.1 billion: 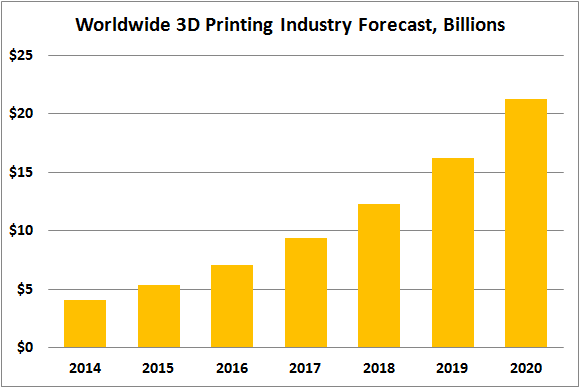 Unfortunately, this estimate doesn't account for how 3D Systems and Stratasys -- the largest 3D printing companies by revenue -- reported a notable slowdown in customer spending across their professional and industrial segments during the first nine months of 2015. During this period, 3D Systems saw its revenue increase by a modest 3.6%, while Stratasys saw its revenue fall by 2% -- both of which are nowhere near that 31% growth expectation.

To be fair, when the two largest 3D printing companies by sales report a notable slowdown, it's probably best not to put too much emphasis on that $7.1 billion estimate. Better yet, consider it a lesson that estimates reflect a specific point in time and don't account for new developments.

2. 10 to 100 (times faster)
Two extremely well-funded companies will be making their entrance into the 3D printing world in 2016: HP (NYSE:HPQ) and Carbon3D. Both companies have plans to introduce new 3D printing technologies that address many of the shortcomings associated with 3D printing, including speed and surface finish. They both believe these shortcomings are holding back adoption from reaching a mass scale. While there's still time for 3D Systems and Stratasys to respond to these emerging threats, it's clear that customers will have more options than ever as the industry becomes more competitive.

3. 15.9% and 18.3%
Compared to the $4.1 billion in revenue the 3D printing industry generated in 2014, 3D Systems' 2014 revenue comprised 15.9% of the total, while Stratasys' represented 18.3%. Investors can use these figures to gauge if 3D Systems and Stratasys gained or lost revenue share in 2015 when the data becomes available later this year. A big question is whether 3D Systems and Stratasys are growing at the pace of the overall industry. If they aren't, it could suggest that it's becoming increasingly difficult for them to remain differentiated, which would raise a red flag.

Looking ahead: Expect another busy year
According to HP, there are hundreds of thousands of enterprises that could benefit from 3D printing, but have yet to purchase a 3D printer. This spells tremendous opportunity for the 3D printing industry over the long haul, but the short-term prospects remain less certain. After all, the industry appears to be in the midst of a slowdown at a time when new competition is on the horizon.

Ultimately, expect 2016 to bring lots of action as new players seek to disrupt the stronghold that 3D Systems and Stratasys have established.