Please ensure Javascript is enabled for purposes of website accessibility
Log In Help Join The Motley Fool
Free Article Join Over 1 Million Premium Members And Get More In-Depth Stock Guidance and Research
By Tyler Crowe - Jan 5, 2016 at 7:45AM

Investors seem to be scared that refiners will lose their edge now that producers can export crude themselves.

What: Shares of Phillips 66 (PSX 1.89%) declined more than 11.5% in December as the entire refining space declined more than 4.5%. A decent chunk of that decline can be attributed to Congress' lifting of the ban on exporting crude oil. 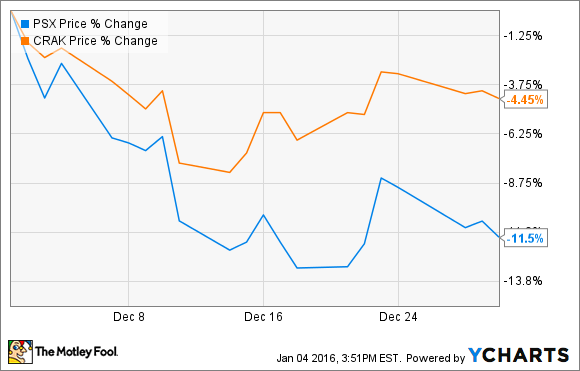 So what: One of the open secrets about the oil export ban was that while it was in place, we were exporting loads of refined petroleum products overseas, and Phillips 66 was one of the largest beneficiaries of that trend. In the second quarter of 2015, the company was exporting as much as 140,000 barrels per day of refined gasoline and diesel from the Gulf Coast.

Another component that made the oil export ban compelling to refiners -- at least until oil prices started to decline -- was that domestic crude oil was trading at a discount to international benchmark prices, so domestic refiners such as Phillips 66 could reap even larger profits from moving finished products overseas.

Now that Congress has lifted the ban on exports of crude, chances are the price differences between domestic and international crudes will get much smaller, and Phillips 66 won't enjoy as robust margins between the price of crude oil and refined products.

Now what: If you were to ask Phillips 66 management, chances are they aren't sweating the oil export ban too much. The company just completed a major natural gas liquid fractionator in the Gulf Coast that will be used to supply some of its multibillion-dollar investments in new petrochemical facilites there. Also, with oil prices as low as they are today, the margins between crude and refined product are still pretty strong.

Ultimately, this isn't going to make or break the company, and investors shouldn't shy away from Phillips 66 simply because of this temporary downturn. In fact, with shares trading at a P/E ratio of 9.6 and a dividend yield of 2.7%, now might be a time to put Phillips 66 on your radar.