Please ensure Javascript is enabled for purposes of website accessibility
Log In Help Join The Motley Fool
Free Article Join Over 1 Million Premium Members And Get More In-Depth Stock Guidance and Research
By Matthew DiLallo - Jan 5, 2016 at 10:39AM

A tough 2015 could lead to a rebound in 2016, but a lot would have to go right for Kinder Morgan to push past its former highs. 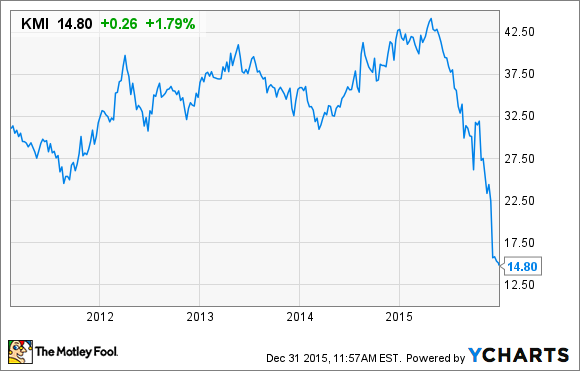 That said, with the company addressing the main issue leading to its free fall it's quite possible that the stock price could rebound in 2016 once investor fear begins to abate. However, a lot would have to go right for the company to blast past its former high, which was hit this past spring.

The undoing of what undid it
Kinder Morgan's clobbering over the past few months was largely the result of three factors:

The company was able to address those last two by slashing its dividend, which will now provide it with the internal capital it needs to both fund its backlog and keep its debt level from growing any further. It's a situation that should eventually lead to a stabilization in the company's stock price.

That being said, the issue that really started all of the concerns was Kinder Morgan's exposure to commodity prices. As the slide below notes, the company had expected to generate nearly $8.2 billion in segment earnings at a $70 oil price and $3.80 for natural gas, which would leave the company with $654 million in excess cash flow after paying a growing dividend in 2015. 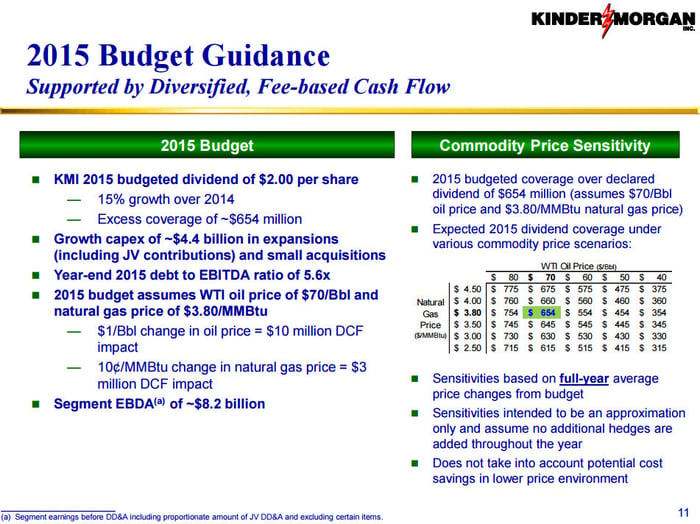 The problem with that guidance is that prices were much weaker than projected, leading the company's dividend coverage to be much slimmer than expected. Further, the weaker earnings also pushed up the company's debt-to-EBITDA ratio from the 5.6 times it projected to upwards of 5.8 times, which worried its credit rating agency.

Because of this direct exposure to commodity prices, Kinder Morgan's cash flow will see a direct benefit should commodity prices rebound in 2016. This will help to alleviate some of the pressure on its credit metrics, which would take some of the weight off the stock price.

A transformative deal could fuel a big rally
Aside from a rebound in commodity prices, the other catalyst that could catapult Kinder Morgan's stock to new highs is a transformative transaction that vastly improves its credit metrics. An all-equity acquisition of a lower leverage midstream company such as Magellan Midstream Partners (MMP 0.57%) or Targa Resources (TRGP 0.83%) and its MLP Targa Resources Partners (NYSE: NGLS) could accomplish two very big goals at once. First, if done at the right price, the deal could be accretive to Kinder Morgan's earnings, which would provide a boost to its valuation. Second, and more importantly, both Magellan Midstream Partners and Targa Resources have lower debt-to-EBITDA ratios than Kinder Morgan with Magellan's below 3.0 times while Targa Resources' is in the 4.5 times range: 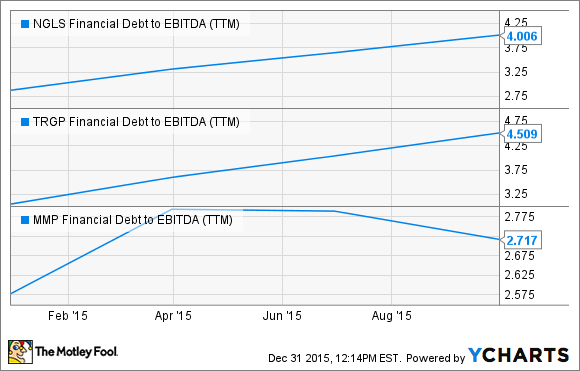 So, if Kinder Morgan brought either into the fold it would reduce its pro forma leverage ratio. That would further calm investors' fears surrounding its debt.

Having said that, using equity to fund the acquisition of a company like Magellan Midstream Partners would be tough given how far Kinder Morgan's equity value has fallen compared to Magellan's. The better bet would be to acquire a similarly beaten down midstream company like Targa Resources, however, its leverage is higher and it has even more direct exposure to commodity prices, both of which make it a riskier bet.

Investor takeaway
Kinder Morgan is coming off a very tough year, but there is reason to be optimistic for 2016. A rebound in commodity prices would help increase its cash flow, which could fuel a rally in its stock price. Further, the company could really transform its balance sheet from a weakness to a strength if it acquired a midstream company with a much lower leverage ratio. Combined, these two moves could fuel Kinder Morgan to rebound back above its most recent high.