Clayton Homes is a headline risk, but has little impact to the Berkshire business.

Berkshire Hathaway's (BRK.A 1.66%) (BRK.B 1.71%) home builder and financier, Clayton Homes, is back under the microscope. This time the charges are coming from Buzzfeed News, which describes Clayton Homes as a company that unfairly targets and exploits minority home buyers.

Clayton has always been an interesting case in the manufactured homes business because it has managed to survive and thrive while competitors have gone into bankruptcy. The three largest manufactured housing companies at the turn of the 21st century all went bankrupt in the decade that followed.

The 2010 annual report describes Clayton's underwriting as exceptional. Its losses from its mortgage pool peaked at less than 2% through the financial crisis, a result that few lenders -- particularly manufactured home lenders -- could claim as their own. 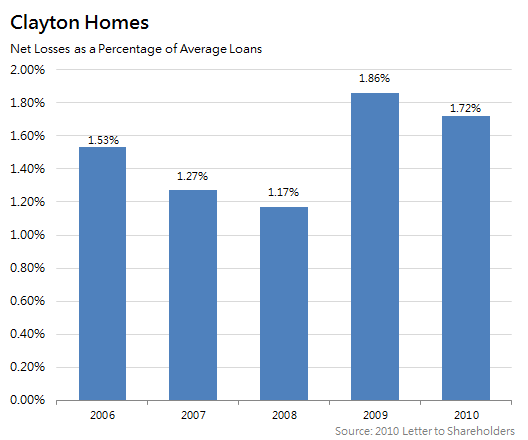 In 2008, Buffett described Clayton's underwriting as among the best in the industry. "Clayton, it should be emphasized, followed far more sensible practices in its own lending throughout that time. Indeed, no purchaser of the mortgages it originated and then securitized has ever lost a dime of principal or interest."

The Seattle Times, which first brought Clayton's practices to light, may have shed some important detail on what makes Clayton's underwriting so much better than its peers. Its loans de-risk quickly.

As the Seattle Times reported, "Clayton often marks up new homes about 70 percent over invoice, company documents show. After a 20 percent down payment and thousands of dollars in fees added into the loan, Clayton can recoup more than half the wholesale price of the home in a year."

Buzzfeed makes a rather convincing claim that minorities pay more for Clayton's mortgages, regardless of their incomes. In particular, it notes that "minority borrowers earning between $75,000 and $100,000 on average pay interest rates slightly higher than those paid by Vanderbilt's white borrowers making only $25,000 to $50,000," according to its analysis. Vanderbilt is the name of one of Clayton's mortgage companies.

It goes on to say that the company's mortgage firms originated 38.42% of all loans used to purchase manufactured homes in 2014, and that nearly 63% of these borrowers did not purchase a home from Clayton. To win nearly 63% of its mortgage business from other manufacturers suggests it offered better terms than other lenders.

The crux of Clayton Homes' argument is that income is an important measure of credit quality, but it is not the only criteria used to underwrite loans. Credit scores, location, and the size of the loan are also important pieces of its process. A prime borrower with lower income may be a better risk than a subprime borrower with higher income, all else equal.

What is certain is that manufactured homes are not treated equally in the mortgage market. In his 2009 annual report to shareholders, Buffett described a bifurcated mortgage market. Site-built homes qualified for agency-insured mortgages, and thus borrowers could pay as little as 5.25% for a 30-year loan on such a property at the time. Meanwhile, most factory-built homes don't qualify for agency insurance, and thus came with significantly higher rates of 9%, according to Berkshire's letter to shareholders. As Buffett admits, the cash buyer of a manufactured home gets a much better deal.

Either way, Clayton Homes isn't exactly a needle-moving company for the Omaha-based conglomerate. Last year, Clayton generated $558 million in pre-tax profits, a mere fraction of Berkshire's pre-tax earnings of $28.1 billion for the full year. Clayton is a headline risk, and not much more.

Jordan Wathen has no position in any stocks mentioned. The Motley Fool owns shares of and recommends Berkshire Hathaway. Try any of our Foolish newsletter services free for 30 days. We Fools may not all hold the same opinions, but we all believe that considering a diverse range of insights makes us better investors. The Motley Fool has a disclosure policy.