I used to think the "PPG" in PPG Industries (NYSE:PPG) stood for Pittsburgh Paint and Glass. But in fact, it's a remnant of the company's origins as the Pittsburgh Plate Glass Company. Flat glass now accounts for only 3.5% of its revenue, but even if it did have "paint" in its name, it would still be a misnomer. Paint, in the familiar sense of something you dab on the walls, accounts for only about a quarter of PPG's revenue.

PPG's main business is coatings for an array of commercial and industrial applications, ranging from marine antifouling to car finishes, coatings for food containers, enamel coating for appliances, etc. PPG is roughly tied with Akzo Nobel as the biggest factor in these businesses, although each is stronger in some segments than others. Beyond that, PPG is a minor player in fiberglass, which accounts for about 3.5% of its revenue.

All other things being equal, PPG could probably expect another mid-single-digit earnings-per-share increase in 2016. Currencies will continue to weigh heavily on first-half performance, but there is a chance that PPG will get some respite in the second half. However, all other things are not equal. The November 2014 timing of PPG's acquisition of Comex in Mexico, that country's largest paint and coatings manufacturer, was, to say the least, unfortunate: Within days, the peso began to slide, losing 22% of its value relative to the dollar over the past year. PPG paid about 2.3 times Comex's sales, which would have seemed reasonable at the time, but less so now, when PPG is trading near 1.7 times sales. However, it acquired the Mexican market leader in both architectural paint (65% of revenue) and industrial coatings (35%). Combining Comex with PPG's existing Mexican activities, and significant new investments in Mexico, should lead to a significant improvement of its results in 2016.

PPG's industrial businesses and its much greater international exposure (59% of 2014 revenue -- the 2015 figure will be somewhat lower because of currency fluctuations) differentiate it from Sherwin-Williams (NYSE:SHW), which is active in some of these areas but is primarily a domestic U.S. maker of architectural paints, where it's the U.S. market leader, with about a 40% share. PPG is No. 2 to Sherwin-Williams in U.S. architectural paint, but it has greater non-U.S. exposure even in that segment. PPG's business mix is more comparable to that of Valspar (NYSE:VAL), which holds the No. 3 spot in U.S. architectural paint but, like PPG, is engaged primarily in industrial businesses and is similarly multinational. Both companies' shares outperformed those of PPG in 2014 and in 2015: 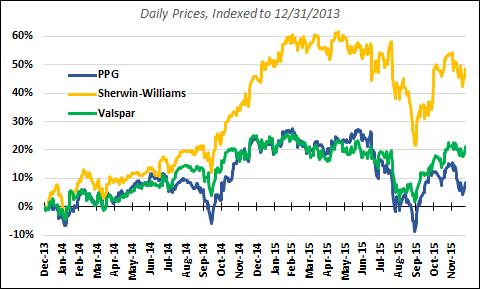 The relative performance of Sherwin-Williams is understandable: With limited non-U.S. and less industrial exposure, it has suffered less than the other two companies from currency developments and weakness in manufacturing everywhere. Furthermore, Sherwin-Williams has made solid progress in the U.S. architectural paint market, gaining share at the expense of the other two thanks to its retail strategy. Sherwin-Williams reached record valuation levels before its stock retreated sharply over the summer, and it's now close to those levels again.

Since the companies are more similar, Valspar's performance relative to PPG is less easily explicable. Adjusting for PPG's 2014 disposals, its 2015 earnings performance has been stronger than Valspar's, yet they trade at similar valuations. Valspar has made some acquisitions, such as the Ace Hardware cooperative's own-brand paint operation in 2013, that are more visible to American analysts than, say, PPG's 2014 acquisition of Comex. Valspar is somewhat more oriented toward architectural paint and toward food packaging coatings (where it is the world's No. 1) than PPG (which is No. 2 in packaging coatings).

Such demand has certainly materialized in the commercial sector, which is close to its previous peak, but the recovery in housing has been unconvincing. Current valuations of architectural paint businesses seem to rely on a full-fledged recovery in residential construction developing over the foreseeable future, which is showing few signs of materializing, in the U.S. or elsewhere: 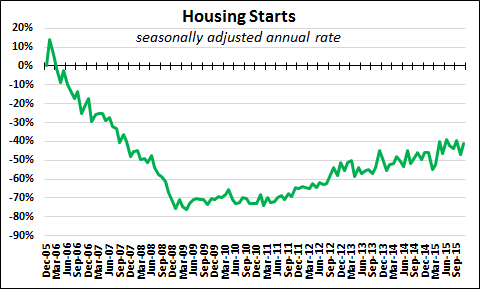 Should new housing construction remain anemic, the result for the architectural paint business will be excessive inventory and price erosion when the cycle turns and demand from new commercial and residential construction eventually retreats. Paint manufacture is capital-intensive, which the base load of renovation work cannot, over the long run, support: it relies on cyclical demand accompanying peaks in construction activity to see it through down times. This dynamic has driven the worldwide consolidation of the architectural paint business over the past 20 years and will continue to do so. Only very large manufacturers, which have the resources to survive these ups and downs, can expect to survive in the long run.

Meanwhile, PPG's various industrial coatings businesses follow their own cycles. Coatings for food containers (in which PPG is the world's No. 2 behind Valspar) are relatively acyclical, as might be expected, as are the roughly half of PPG's industrial sales that are for maintenance. But when times are tough, maintenance can be postponed, and PPG's substantial exposure to the oil, gas, and shipping sectors may be experiencing some of this. The automotive and aircraft businesses are healthy, while marine newbuilds are down and general industry is mixed. Like all coatings manufacturers, PPG has been challenged to push through price increases in an environment of weak volume growth.

It's worth pointing out that, despite oil price weakness, the Mexican economy is not doing badly -- Q3 gross domestic product rose 2.6%, accelerating from 2.4% in Q2 -- and this should support paint volumes. Since PPG already had a presence in Mexico, it was able to enhance Comex's market position, and it expects significant synergies to result during 2016. PPG already had a significant presence in Mexico, so savings can be expected across the board, from managerial staff through purchasing and manufacturing to marketing and distribution. Comex had a much stronger retailing structure, which will provide a new channel for PPG product. These should boost PPG's 2016 earnings per share by low double digits. With a dividend yield of 1.4% and a moderate valuation, PPG is probably well positioned in 2016 to make up some of the ground its shares have lost relative to its paint industry peers. 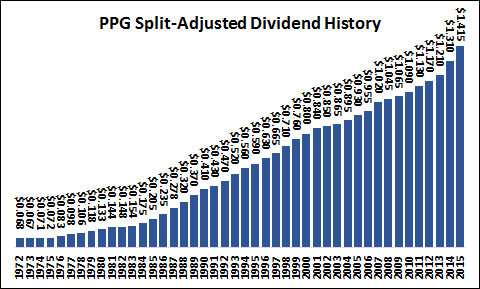