Please ensure Javascript is enabled for purposes of website accessibility
Log In Help Join The Motley Fool
Free Article Join Over 1 Million Premium Members And Get More In-Depth Stock Guidance and Research
By Daniel Miller, Steve Symington, and Todd Campbell - Jan 6, 2016 at 11:02AM

With great potential comes great risk, however, so these three stocks may not be for the faint of heart.

It's incredibly difficult to find the next Tesla Motors, an incredibly forward-looking company that continues to trade at astronomical values because of its long-term potential. Such stocks are few and far between. Investors can, though, find recently beaten-down stocks -- especially in the energy sector -- and there's always that currently unprofitable company that's about to turn the corner. Here are three companies that our analysts have an eye on that could soar in 2016.

Steve Symington
On the surface, it looks like Sierra Wireless (SWIR 0.20%) had a disastrous year. But a closer look shows the long-term growth story is still firmly intact for this Internet of Things pure play.

Shares of Sierra Wireless fell more than 60% in 2015, hurt early in the year as the company consistently outpaced analysts' quarterly expectations but offered conservative guidance as RF component shortages were expected to negatively affect both revenue and costs of goods sold. Sure enough, those supply constraints caused some customers to build larger inventory than normal as of its most recent quarter, and, combined with temporary demand headwinds as the mobile computing industry migrates to a new processor platform, resulted in a 25% single-day plunge in November after the company released weaker-than-expected third-quarter results.

However, the challenges Sierra Wireless is facing today are temporary: In its most recent report, management told investors to expect demand crimped by the processor transition to normalize "in the coming months." And though the effects of the previous RF component situation are still being felt on the inventory front, the actual shortages essentially resolved by the start of Sierra Wireless' third quarter.

Meanwhile, all of Sierra Wireless' remaining segments have turned in solid performances. Last quarter, that included sales growth of more than 26% from its key enterprise solutions segment, as well as the company's largest-ever design win with an unnamed international automotive OEM.

In the end, for investors willing to pick up shares at today's depressed levels, I think Sierra Wireless stock is poised to deliver market-beating results in 2016 and beyond.

Daniel Miller
To say that TrueCar (TRUE -3.49%) had a bumpy ride throughout 2015 would be a vast understatement. Between dealership lawsuits, a horrendous second-quarter financial performance, a split between the company and the nation's largest dealership group, and the CEO's resignation, it seemed shares of TrueCar were up 15% or down 15% on any regular business day.

However, despite the stock-price volatility, it seems the stock bottomed out in August and has slowly rebounded as the dust settles from a rough year. Because of the sell-off, if TrueCar can right the ship and prove to investors that its second quarter was an anomaly, rather than the beginning of the end, the stock could soar in 2016. 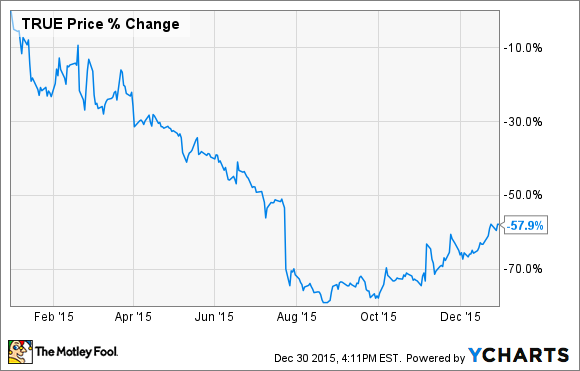 TrueCar took a small step in winning over investors during its third quarter, when it beat analyst estimates by two pennies, excluding items and stock-based compensation. But its third quarter was much better than just a two-penny beat. The company's average monthly unique visitors jumped 43% higher compared to last year, to 6.6 million during the quarter, which shows there's still strong interest in and growing awareness of the company's website.

Furthermore, TrueCar's acquisition cost per sale declined 11% from the previous quarter to $193, while its year-over-year monetization per transaction increased from $303 to $324. If TrueCar can keep the ball rolling in the fourth quarter, it will have some momentum going into 2016 and could really soar if the company continues to grow with new ideas, such as its partnership with Sam's Club.

But investors beware: Just as TrueCar could soar next year, 2015 serves as a reminder that if the company's performance slips for even a quarter, its stock price will plummet.

Todd Campbell
No one knows where any one stock will trade in a given period, but I do think aggressive investors ought to keep an eye on NantKwest (NK), a small-cap biotech company controlled by billionaire healthcare guru Patrick Soon-Shiong, who, as you may recall, sold Abraxis BioScience to Celgene for $2.9 billion in 2010.

NantKwest is developing off-the-shelf cancer therapies based on natural killer cells -- cells in the immune system that identify and destroy abnormal cells in the body. The approach may be better than highly touted chimeric antigen receptor T-cell (CAR-T) therapies that supercharge the body's immune system to destroy cancer. Although life-threatening cytokine responses have been associated with CAR-T therapies, NantKwest administered its NK cells to patients in doses as high as 10 billion cells in phase 1 studies without any reported severe side effects.

NantKwest is conducting a phase 2 study of NK-92 in a rare type of melanoma, and earlier this month, it reported encouraging pre-clinical data for a breast cancer therapy that combines its NK cells with Nant-paclitaxel, a reformulation of the widely used chemotherapy. If Soon-Shiong's track record is any indication, then investors may want to pay particular attention to NantKwest in 2016.