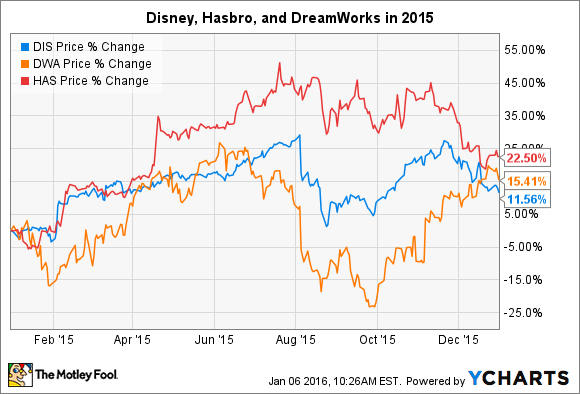 It was a relatively easy ride for Hasbro and Disney shareholders, since their stocks stayed in positive territory all year. In contrast, DreamWorks needed a rally over the final three months of 2015 to roar back from the 25% decline it had suffered through September.

So what: While their business scopes vary, the companies share a focus on family entertainment. And their business models often begin at the box office, where franchises become hits that generate years of sequels and toy sales -- or flops that fail to spark consumer interest.

Disney avoided that fate by posting a record year in theaters, pulling in $5.8 billion and trouncing its prior high mark of $4.5 billion set in 2013. Contributing to that epic result were blockbusters like Inside Out and Avengers: Age of Ulton. Yet even those hits pale in comparison to the global event that was the Star Wars: The Force Awakens launch. That film, despite its December opening, logged the highest-grossing release of all time before becoming the quickest movie to ever reach $1 billion in receipts.

Meanwhile, DreamWorks managed to outperform low expectations in 2015. For the first time in four years, CEO Jeffrey Katzenberg and his team avoided releasing a disappointing feature film. Home, it's only movie launch of 2015, was a solid hit. The animated film grossed $400 million in theaters worldwide, making it DreamWorks' best non-sequel release since The Croods in 2013. Home has since gone on to become the company's best-selling home entertainment offering to date.

Hasbro shared in many of Disney's big wins last year. The company snatched exclusive rights to the Disney Princess line of merchandise from rival toy producer Mattel (NASDAQ:MAT). That victory is hard to overstate. Mattel executives blamed the move for holding back sales last year and projected it will crimp results in 2016. "It's clear we will continue to have significant challenges with the loss of Disney Princess," CEO Chris Sinclair told investors in October. Hasbro also benefited from Disney's record box office outing through licensing deals on the Marvel and Star Wars brands.

In Hasbro's final conference call of the year, management said they were excited by the consumer demand for the Star Wars product line, which the company was dominating in terms of toy sales. "The franchise is as vibrant as ever, spanning demographics and bringing in new consumers," CEO Brian Goldner said. "Star Wars has the potential to become increasingly global, much as Marvel has become."

Now what: With another strong year projected in the global box office in 2016, the companies could continue to benefit from the same trends that lifted their results last year. Disney is still racking up profits from The Force Awakens, which recently passed $1.5 billion in sales. Shareholders can also look forward to an animated film, Zootopia, in March, followed by a live-action version of Jungle Book, and new releases from the blockbuster-generating Pixar and Marvel studios.

DreamWorks has a potentially easier year ahead since it can count on a Kung Fu Panda sequel to do well even as it puts the final touches on a new property, called Trolls, that's due out toward the end of the year. And as for Hasbro, investors will see just how well it did with Star Wars fans over the holidays when the company posts its fourth-quarter earnings results on Feb. 8.