On the second big down day of the week, these two stocks stood out for their moves higher. 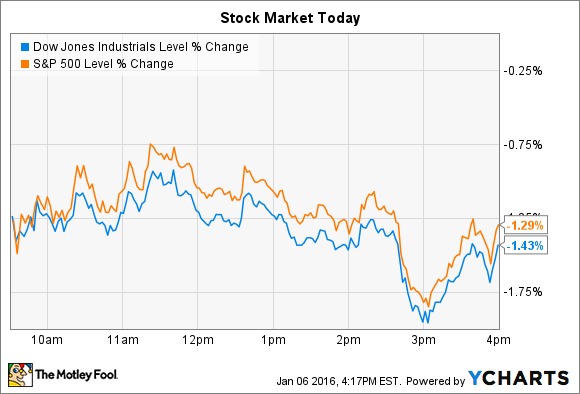 In economic news, oil prices fell to an 11-year low, and new data out of China provided more evidence that the world's second-largest economy's growth pace is slowing. On the plus side, data showed that payrolls in the U.S. increased by a solid 257,000 jobs last month. "Strong job growth shows no signs of abating," Moody's Analytics chief economist Mark Zandi said in today's ADP report.

Meanwhile, Netflix (NFLX 2.72%) and Wal-Mart (WMT 1.85%) were the two best-performing stocks on their respective indexes, bucking the down trend in the S&P 500 and the Dow.

Netflix goes global
Netflix jumped 9% higher today after CEO Reed Hastings, while presenting at the consumer electronics show in Las Vegas, announced that the streaming service became available in more than 130 additional countries. Netflix is now in substantially every market around the world, with the key exception of China.

The news amounts to a major acceleration of the company's global expansion plan. In October, management told shareholders that Netflix was on track to finish its international rollout by the end of 2016. But it turned out that investors didn't even have to wait a full week into the year before that ambitious goal was achieved.

Yet Netflix didn't change its financial guidance as a result of the accelerated rollout. The company still expects to operate at close to breakeven this year before generating "material global profits" in 2017 and beyond. Netflix is due to post fourth-quarter earnings results on Jan. 19. That announcement should show that 5 million new members were added in the three months ended on Dec. 30, and most of those new subscribers, 3.5 million to be exact, are expected to have come from markets outside of the U.S.

If user engagement is any indication, the targets seem achievable. Today Hastings revealed that users streamed 12 billion hours of programming on the service in the fourth quarter, or 50% better, year over year.

Wal-Mart bargain shoppers
Wal-Mart was the best-performing stock on the Dow thanks to its 1% uptick today. The retailing giant didn't announce any operating news, but investors may just be engaged in some bargain hunting given that shares are at multi-year lows. The silver lining in its finish as the Dow's single worst performer in 2015 is that Wal-Mart's dividend yield just crossed 3% to touch an all-time high.

Still, investors who believe the stock represents a value should brace for muted sales and profit growth for at least the next few quarters. While the company just logged its fourth-straight quarter of positive comparable-store sales gains, those improvements have been tiny. Wal-Mart stores in the U.S. saw a 1.7% traffic gain in the third quarter of 2015 compared to 4% jumps at high-performing retailers like Costco and Home Depot.

Meanwhile, management has warned investors that heavy spending on wage increases, and on e-commerce initiatives like grocery delivery, will help push earnings down by as much as 12% in 2016. These investments should pay off by raising customer satisfaction, but it should take time before a better, more-complete shopping experience translates into a real rebound for Wal-Mart.